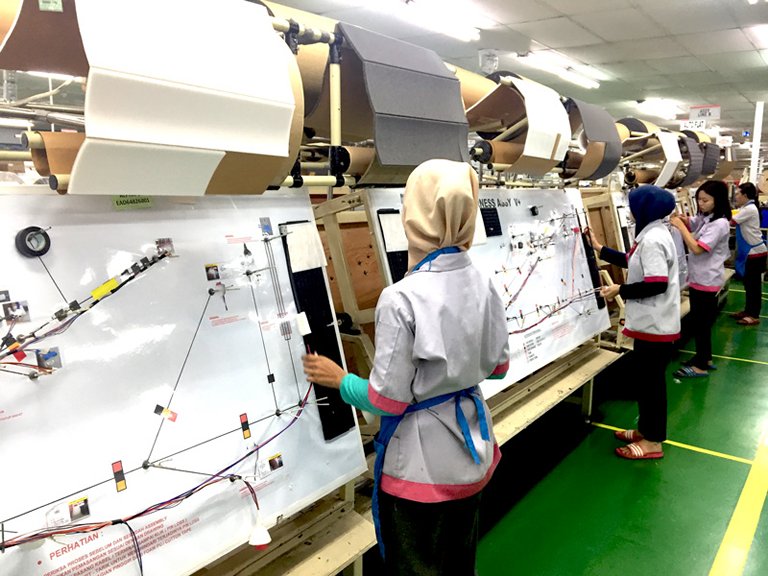 With its population of 267 million, the fourth largest of any country on the planet, Indonesia offers manufacturers a large pool of low-cost labour and a fast-growing consumer market. This has helped to make it an increasingly attractive production base. In recent years, too, it has enhanced its appeal to foreign investors in particular. Since President Jokowi took office in 2014, the Indonesian government has been committed to luring foreign investment through fiscal incentives, foreign investment liberalisation and accelerating infrastructure development.

The improving investment climate has seen many Hong Kong manufacturers turn to Indonesia as an alternative production base. Hong Kong is now one of the top five sources of foreign direct investment (FDI) in Indonesia. Between 2014 and 2019, Hong Kong’s FDI flows to the country increased at an average annual rate of 34%. In 2019, over half of this FDI went to the manufacturing sector. This article will assess the state of Indonesia’s industrial land, infrastructure and labour market, and provide some practical tips for manufacturers looking to invest in the country.

Industrial Clusters across the Java Region

Given Indonesia’s vast size, Hong Kong manufacturers looking to set up in the country need to be very careful about how they select a location that best suits their operational needs. Indonesia is the world’s largest archipelago, with five main islands - Sumatra, Java, Kalimantan, Sulawesi and Papua. Java, which is home to more than half the country’s population, is Indonesia’s main industrial base, generating 70% of the total manufacturing value added. Within Java, the West Java province is home to the clusters of automotive, electronics, machinery and electrical equipment manufacturers, including global brands like Toyota, Samsung and Schneider. Thanks to its proximity to the capital Jakarta, West Java provides manufacturers with better infrastructure and an increasingly affluent consumer market.

However, with labour and land costs in West Java rising, some manufacturers have shifted to lower cost regions within Java, such as Central Java. While the average monthly wage in the manufacturing sector is about US$300 in Jakarta and US$230 in West Java, it is only around US$140 in this province. Makalot Industrial, a leading apparel manufacturer from Taiwan, has already shifted its production from Jakarta to Central Java; Japanese company Aoyama Trading has set up a factory producing high-quality business wear in the province; and Hong Kong’s Combine Will International Holdings (Combine Will) has established a toy factory there, specialising in labour-intensive production processes. Other Hong Kong manufacturers in labour-intensive industries should consider setting up in Central Java to take advantage of its lower labour and land costs.

Many foreign manufacturers choose to establish their factories on Industrial estates (IEs), because the industrial infrastructure outside the IEs is often underdeveloped and they face higher risks in terms of land acquisition and construction permit issues. There are currently about 100 operational IEs in Indonesia, more than half of which are located in Java.

Many IEs have been jointly developed with foreign corporations, including ones from Japan, Singapore and China. This sort of IE tends to target foreign investors looking for more reliable production support. They typically provide a complete set of utilities, including electricity, water, sewage treatment and telecommunications, as well as one-stop-services covering business licences, building permit applications and worker recruitment. Because of these advantages, land costs are generally higher in these IEs. Hong Kong manufacturers thinking of basing themselves here should also consider the transport infrastructure and the wage level of the workforce in the area surrounding the IEs.

At present, there are about 25 IEs in West Java, including the MM2100 Industrial Town which was jointly established by a Japanese conglomerate and an Indonesian industrial property developer in 1990. This IE is home to more than 350 companies, with about half of the tenants coming from Japan (including companies like Toyota, Yamaha and Honda). One of this IE’s key advantages is its location, situated just 30km east of central Jakarta with direct access to a toll road connecting it with Jakarta and the Tanjung Priok Port.

Karawang New Industry City (KNIC) is another large-scale IE, newly established by Chinese developer China Fortune Land Development (CFLD). KNIC is 47km east of Jakarta, and is close to the Cikarang Dry Port, which allows customs clearance to be carried out before goods are transported to the Tanjung Priok Port. This helps avoid the congestion that occasionally affects the Port. KNIC’s transport links will soon be enhanced by the completion, scheduled for 2021, of the high-speed rail line connecting Jakarta and Bandung, the capital city of West Java.

Indonesia’s transport infrastructure is less efficient than those of other countries in the region, like Thailand and Malaysia. Manufacturers should therefore expect logistics to be more expensive and more time-consuming. In the country’s main international port, Tanjung Priok in Jakarta, the time taken in port handling and border compliance is longer than the regional average. However, according to manufacturers in West Java, the dwelling time at Tanjung Priok has been falling gradually in recent years. In the latest Logistics Performance Index compiled by the World Bank in 2018, Indonesia ranked 46th, a significant improvement on the 63rd position it achieved in 2016. Nevertheless, it still lags behind some of its regional peers, such as Malaysia (which ranked 41st), Vietnam (39th) and Thailand (32nd).

In the near future, Indonesia’s transport and logistics efficiency is likely to improve further, as President Jokowi has made infrastructure development a priority for his second term in office. The government has kick-started several transport projects surrounding Jakarta, such as the Greater Jakarta LRT (light rail transit) and the Jakarta-Bandung high-speed railway. The country’s longest elevated expressway, Jakarta-Cikampek II Toll Road, was opened in December 2019. It is designed to ease traffic congestion between Jakarta and nearby cities in West Java. Manufacturers looking to set up in West Java should consider industrial parks or areas with direct highway connections in order to facilitate freight movement between their factories and Tanjung Priok in Jakarta.

Indonesia’s underdeveloped industrial supply chain means that companies face extra logistics costs for importing raw materials, components and other inputs. According to several electronics producers in West Java, although some low value-added inputs can be sourced from local suppliers, most raw materials and parts still have to be imported. Consumer product manufacturers should note that Indonesia lacks a good supply of packaging materials that meet the safety standards and Corporate Social Responsibility (CSR) requirements of developed markets like the US and EU.

Although minimum wages in Indonesia have been rising faster than in other ASEAN countries, the wage levels in the main industrial areas such as West Java are still comparatively low for the region. Since 2015, Indonesia has applied a standard minimum wage formula, which takes into account the rates of national economic growth and inflation. Minimum wages have risen about 7-9% annually over the last three years, with the latest increase of 8.5% coming into effect in January 2020. There is a considerable difference in wage levels across the country. For example, the monthly minimum wage in Jakarta is IDR 4,276,350 (US$305) in 2020, more than double those in Central Java (IDR 1,742,015 or US$125) and West Java (IDR 1,810,350 or US$130).

With a labour force of 134 million, Indonesia’s large pool of low-cost workers makes it an ideal production base for labour-intensive industries. According to several foreign manufacturers in West Java, there is no difficulty in hiring enough workers, even in the area surrounding Greater Jakarta with its high density of factories. However, Hong Kong manufacturers should be aware that Indonesia is a predominantly Muslim country. It is important to respect the country’s religious customs and practices, such as Friday prayers[1] and Ramadan[2], by providing dedicated spaces for people to pray. Indonesian workers are self-disciplined and are able to perform their religious rituals without affecting the production process.

In general, since Indonesian workers tend to have a lower level of vocational skills and are less efficient than their counterparts in China and Vietnam, it is essential to provide more intensive training and detailed instructions. According to an electronic components manufacturer in West Java, it is worthwhile investing in skills training as the turnover rate of workers is low (about 5%). It also helps to build staff loyalty as Indonesian workers appreciate the opportunity to learn.

[1] Friday prayer usually takes place during the afternoon on Fridays.

[2] During the month of Ramadan, Muslims fast every day from dawn to sunset. The dates of the holy month of Ramadan varies every year as it is linked to the Islamic lunar calendar year.