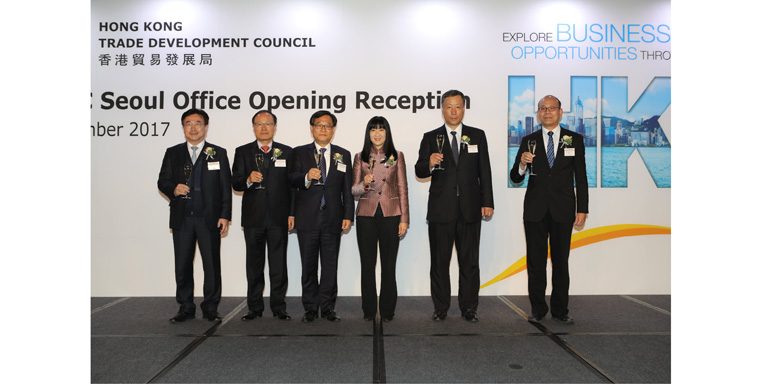 WHAT: Trade and business ties between Hong Kong and the Republic of Korea are set to strengthen with the official launch of the Hong Kong Trade Development Council (HKTDC) office in Seoul.

WHO: More than 280 government officials and business leaders from Korea and China attended the reception, including Kim Youngsam, Deputy Minister for Trade and Investment, Ministry of Trade, Industry and Energy, Republic of Korea; and Gu Jinsheng, Minister-Counsellor, Economic and Commercial Counsellor’s Office, Embassy of the People's Republic of China in the Republic of Korea.

WHY: The HKTDC has been operating a consultant office in the Korean capital since 1990. The upgraded presence will further boost Hong Kong’s trade and business promotion in Korea.

With a full-fledged HKTDC office in Seoul, run by staff from both Hong Kong and Korea, the HKTDC will provide more comprehensive services to connect companies from both places and help them capture new opportunities.

Korea is Hong Kong’s sixth-largest trading partner and fifth-largest source of imports. In the first nine months of 2017, bilateral trade surged 26 per cent year-on-year to US$28.2 billion, while Hong Kong imports from Korea grew 32.3 per cent to US$22.9 billion. During the same period, the city’s total exports to the country rose 4.5 per cent to US$5.3 billion, making Korea Hong Kong’s 10th-largest export market. Major imports and exports between the two economies include semiconductors, electronic valves and tubes, as well as telecom equipment and parts.

About 1,700 Korean companies are operating in Hong Kong, according to the Consulate General of the Republic of Korea in Hong Kong. Korea’s cumulative foreign direct investment in Hong Kong amounted to US$3.3 billion at end-2015.

The Seoul Office is part of the more than 40 HKTDC offices globally that help promote Hong Kong’s role as a platform for doing business with the Chinese mainland, Asia and the world.

And You Can Quote Me: “Hong Kong and Korea share a long and close partnership. New opportunities have emerged with the Belt and Road Initiative, the Guangdong-Hong Kong-Macau Bay Area development plan, and Hong Kong’s recently signed Free Trade Agreement with ASEAN – three more good reasons for Korean companies to expand their business in Hong Kong. We welcome more Korean firms to use Hong Kong as a base to unlock the massive business opportunities that the Belt and Road Initiative and the Bay Area bring.” (Margaret Fong, HKTDC Executive Director)