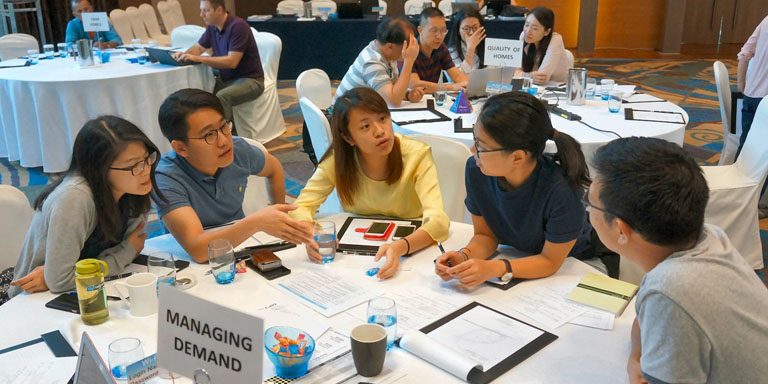 Leadership for the 21st Century

In 2004, Chandran Nair founded the Global Institute for Tomorrow (GIFT) in Hong Kong, an independent think-tank whose executive education programmes have reached more than 1,500 executives in 15 countries. Mr Nair authored several books, including Consumptionomics: Asia’s Role in Reshaping Capitalism and Saving the Planet, The Other Hundred and, in 2015, The Other Hundred Entrepreneurs, and is a sought-after speaker for his work on sustainable development.

How did you develop the idea for GIFT?
I was intrigued by the many changes taking place in the world, yet there wasn’t a general “Asian narrative.” I felt that with the rise of Asia, there needed to be one that was pertinent and relevant to the challenges. Much of the discourse that was taught in schools was through the lens of the West. I thought that this was totally irrelevant to our world, and wanted to set something up that started to bring a new narrative.

What is GIFT’s business model?
GIFT was set up as a Pan-Asian think tank, but also as a company. The idea was not to set up a company that grew for the sake of growth and a mission of becoming a multinational with an IPO, but one with a whole different notion of success, growth and how to spread ideas.

One of the reasons why I set up GIFT is because I feel the dumbing down is pervasive and that intellectual dishonesty seems to be the currency of our times. There was a growing audience interested in more discussion, particularly from this part of the world. Therefore, the idea was: if the ideas that we were sharing were relevant and of interest, I should be able to monetise it. I felt the best way to monetise and legitimise it was to take it into the largest economic entities and organisations in the world – global and large local companies, civil society organisations and, of course, governments.

Tell us about the GIFT leadership programme.
I started them mainly because many leadership programmes run by business schools and Western think tanks are part of the 20th century and past their sell-by date. They are in denial about the world, unable to accept the new reality in the rise of the others, and thus continue to be purveyors of old ideas.

So in our Young Leader Programme, I think three things make us different. Firstly, the intellectual premise is very different. Secondly, it’s a premise born out of real-world experience in Asia. And last, it’s experiential-based unlike business schools, which are case study-based.

What is this intellectual premise?
Essentially, the world’s population will peak in the next 30-40 years. We live in a very unique time. We have entered the age of the carbon world, which has essentially been created by humans, and an era of tech overreach – too much technology for our own good. We have climate and resource constraints. Which part of the world will face these consequences the most? Asia. What happens here will matter because it’s 60 per cent of the world’s population. Our narrative is essentially that we need a whole new narrative: what does leadership look like in a world of constrained prosperity? The idea that six billion Asians in 2050 can live lifestyles taken for granted in North America and Europe – well you don’t need to be a rocket scientist to know, no way. Therefore, what do we do?

What happens in these programmes?
The next step is that we take them into a real world problem. Most recently, it was affordable housing. We introduce people to solving a problem. They learn how to think outside the box, speak out, connect numerous dots and embark on a journey of leadership based on creative thinking and intellectually robust analysis.

Every year, we bring 30 young professionals (typically I would want them to be in their late 20s, early 30s) from government, businesses and civil society. The Hong Kong programme is a virtual think-tank that convenes every year; not a stuffy think-tank, but to say here’s how you look at these things and here’s a social dilemma. What is the new business model and what are the policy changes to do this?

And every year we take on an issue so participants go away most importantly with renewed confidence in Hong Kong. Secondly, they feel that things can be done – you have to think positive. They go away with new skill sets and better understanding. I don’t pretend they can change the world; the idea is that they will take this back and start to spread that.

What are GIFT’s growth plans?
I’d like to get more people to partner with us. Late last year, we opened an office in Kuala Lumpur to get much of our discussions, methodologies and viewpoints into the ASEAN region. There’s a huge market in Asia for what we talk about. Japanese companies are also a big client of ours, because post-Fukushima, I think the Japanese understand that unfettered growth based on relentless consumption and promoting externalities is not possible. So we’ve been invited to open an office in Tokyo.

I see a very important need for us to be in mainland China. I want a presence there, but we’re ahead of the curve and maybe that’s where China faces its greatest risk: not understanding that the new world in which they operate requires a completely different understanding of the challenges facing the 21st century.

Related Links
Global Institute for Tomorrow (GIFT)
The Other Hundred