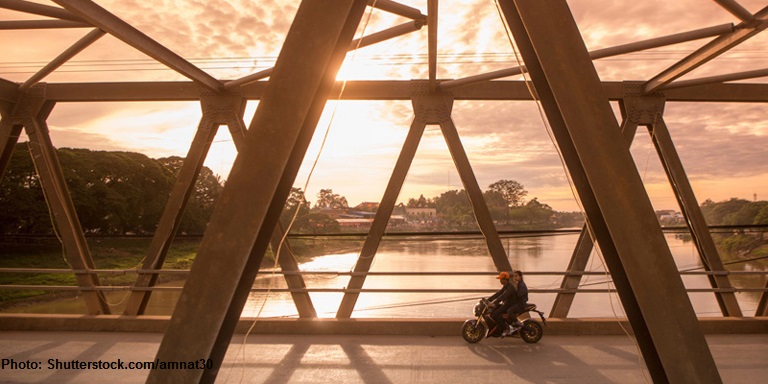 At the end of last month, Cambodia's Ministry of Public Works and Transport (MPWT) announced that work had been completed on 2,000 kilometres of new roads, seven major bridges and a container terminal servicing the Phnom Penh Autonomous Port. All these initiatives had largely been backed by the Chinese mainland, with funding provided from within the framework of the Belt and Road Initiative (BRI).

The announcement was triggered by the official opening of a section of National Road No 6, a 251km stretch connecting the provinces of Kampong Cham in the southeast with Siem Reap in the northwest. The road has a particular economic significance in that it provides a direct and rapid link between Phnom Penh, the Cambodian capital, and Angkor Wat, the country's principal tourist attraction.

It took four years and two months to complete this key part of the country's road network, with the Shanghai Construction Group – the company responsible for much of Shanghai's mid-1990's architectural makeover – acting as the lead contractor. The cost of the project is estimated at about US$255 million, with 95% of that covered by a concessional Chinese loan and the balance made up by the Cambodian government.

While significant in its own right, the work on the road link is just a small part of the BRI-led transformation of Cambodia's transport infrastructure. According to the MPWT, some 70% of Cambodia's upgraded roads and bridges have been built with Chinese backing. To date, this includes 2,301km of new roads, with an additional 735km still under construction. Of these, the most recently commissioned is the 96km National Road No 11, which was given the go-ahead in March and will connect the provinces of Prey Veng and Tboung Khmum.

Work has been completed on seven of the new bridges, with a combined length of 6.8km. Work on an eighth bridge, spanning the Mekong river, began in February this year with the structure ultimately set to connect the Stung Trang district of Kampon Cham with the Krouch Shmar district of the northwestern Tbong Khmum province. With a construction length of just over 1km, the project is estimated to cost US$57 million. The principal contractor is again the Shanghai Construction Group, with the work expected to take some three-and-a-half years and an opening date pencilled in for early 2021.

China's total investment in the redevelopment of Cambodia's roads and bridges now stands at about US$2 billion. It is generally conceded that, with Cambodia fast becoming a regional manufacturing hub, improved transport infrastructure is all but essential. Given the country's economic growth in recent years, its government has every reason to trust that its escalating debt level will prove to be sustainable. Over the past six years, Cambodia's gross domestic product (GDP) has grown by an average of 7% a year, with the current infrastructure redevelopment programme seen as essential for sustaining that momentum. There are signs that the government's faith might not be misplaced.

Already hailed as one of the first real successes to emerge from the ever-closer Phnom Penh-Beijing partnership is the Cambodian capital's Autonomous Port. The facility, the country's largest freshwater port, gained a new container terminal due to a China-sourced concessional loan of US$28.2 million.

When the terminal became operational in January 2013, the port's container loading capacity was trebled overnight, with the aim of processing 150,000 20-foot-equivalent units (TEUs) a year. Exceeding even the most optimistic predictions, the port's container throughput totalled almost 180,000 in 2017, some 20% higher than its official target.