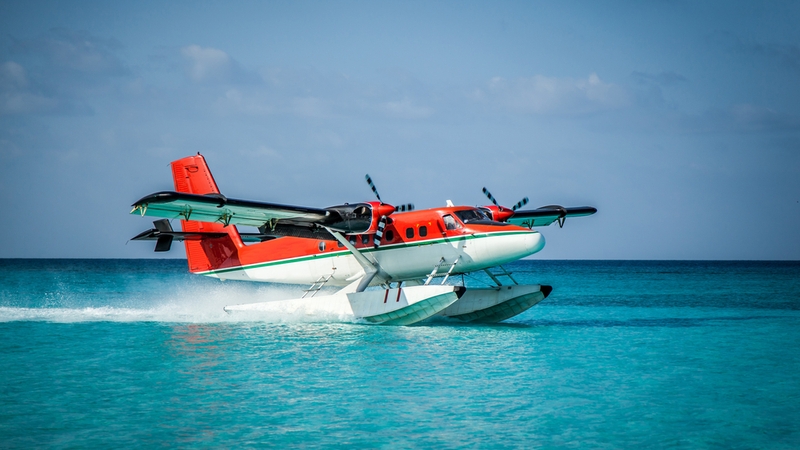 Despite the stalling of the global aviation industry during the Covid-19 pandemic, Steven Cheung, a pilot by profession, established Seaplane Hong Kong in Hong Kong in the midst of this difficult period. With life getting busier, people need to conduct their business at ever greater speeds. This has led to a strong demand for transport in Hong Kong and the Greater Bay Area (GBA). In order to take advantage of this, Cheung has dedicated himself to developing unmanned aircraft powered by hydrogen fuel cells. The idea is to develop an affordable, fast and convenient air taxi service for people travelling between GBA cities and also to offer an innovative tourism option.

Founded in 2020, Seaplane Hong Kong focuses on R&D aimed at enhancing Urban Air Mobility (UAM) – specifically, on developing unmanned aircraft powered by hydrogen fuel cells, with a vertical take-off and landing function. The company has also put a lot of effort into conducting in-depth research on lowering hydrogen power costs, popularising the use of hydrogen power and building hydrogen stations in helipads for electric helicopters. Detailing the company’s work progress, Cheung said: “Currently, we are still carrying out R&D on our aircraft, aiming to obtain the relevant certification from the US Federal Aviation Department and European Aviation Safety Agency in 2024-2025. We envisage that during the initial trial run, the aircraft will mainly be used for goods transport. We will wait until the public have a better understanding and confidence in the aircraft’s safety before carrying passengers on board.” Cheung added that the design, R&D and assembly of the aircraft will all be carried out in Hong Kong. The company now employs 10 full-time staff members who take charge of project management and promotion, while its R&D activities are conducted jointly via partnerships with universities and other businesses.

Compared to an electric aircraft, a hydrogen fuel cell aircraft has a longer range, creates less noise, carries a greater load and costs less. Explaining why he expects hydrogen fuel cell aircraft to become a future trend, Cheung said: “The cost per person per km will be less than six US cents, the noise level can be kept below 65 decibels and the aircraft can travel 400 km after a 2-minute recharge of hydrogen. The problem, however, is that for new-generation nickel-based batteries, their electrode materials’ structure becomes less stable with increased usage, thus reducing the batteries’ life and safety level. We are researching more advanced hydrogen fuel cells to address this problem and to ensure that passengers can travel safely and comfortably.” 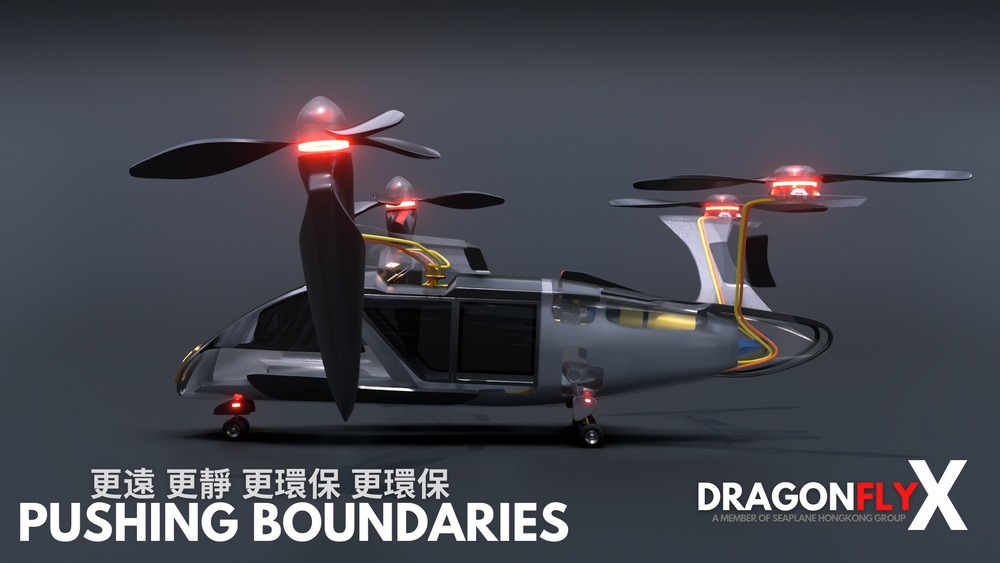 Development of the GBA is one of China’s strategic goals, with the Chinese government sparing no effort in recent years to launch a whole host of preferential policies aimed at developing the region. Cheung is optimistic about the company’s prospects in the GBA, and has devised specific plans to tap the huge opportunities there. Outlining the plans, Cheung said: “Hong Kong has a population of only seven million, while the GBA is a market with 80 million people. Because of this, our eyes have always been set on the mainland market. We plan to set up waypoints in areas not served by high-speed rail or other operators, providing early morning and evening air services designed to make travelling easier for business travellers. The concept of a GBA one-hour living circle will become a real-life experience. In the long run, we are looking to set up an R&D centre in the GBA to nurture world-class aviation technology talent.”

China’s 14th Five-Year National Plan calls for efforts to improve aeronautics and astronautics technologies, promote sustainable green energy, and support Hong Kong in enhancing its status as an international aviation hub. Noting that Seaplane Hong Kong’s business plans align with the nation’s development direction, Cheung said: “Hydrogen fuel cell is a new-generation energy which is green, safe and non-toxic. Since it does not contain carbon, the only byproduct after combustion is water. It is therefore an indispensable source of energy in the drive to achieve zero carbon emission. Major car manufacturers worldwide have successfully developed hydrogen fuel cell vehicles and buses. We want to push the boundaries by applying the technology to the aviation industry, developing aircraft run on this new fuel, and popularising the use of hydrogen power to lessen our dependence on fossil fuels.”

Since it began operating, Seaplane Hong Kong has strived to improve the environment and engage the community in its work, as well as enhance its corporate governance. The company plans to release an ESG (environmental, social, governance) report regularly to spell out its sustainable development roadmap in full support of the United Nations’ sustainable development plan. Cheung suggested that start-ups should keep an eye on China’s development directions in order to seize hold of associated opportunities. Giving his take on the merits of starting a business in Hong Kong, Cheung said Hong Kong is a “blessed territory” for being able to capitalise on the resources, labour and advantages of the mainland nearby. Among the city’s other plusses are an international horizon and network, a free and open market and a huge talent pool with extensive international experience and proficiency in both the English and Chinese languages. It can therefore serve as a key platform for start-ups venturing into the GBA and mainland markets. Summarising its advantages, Cheung said: “Hong Kong is a city where east meets west, and our unique culture means that Hong Kong people have a good understanding of both the mainland and global markets. Hong Kong talent can provide insightful views and advice on how to seek market expansion.”

Furthermore, Hong Kong is served by a well-developed transport infrastructure, comprising an international airport and high-speed rail system closely linked with major cities on the mainland, Asia, Europe and North America, making the GBA an ideal destination for start-ups. Expanding on the strengths of Hong Kong’s transport links, Cheung said: “The journey from Kowloon to Shenzhen on high-speed rail takes only 20 minutes, while a trip from Hong Kong to South-east Asia can be made in just two to three hours. Start-ups setting up their base in Hong Kong can liaise closely with parties in the GBA and overseas investors. If other GBA cities are picked as their base, they can still easily travel via high-speed rail to Hong Kong, an international financial hub, to seek financing for their enterprises.”

As various mainland cities develop in different directions, local policies and preferential measures to boost urban development differ from city to city. Start-ups without a legal support team are often perplexed and find it hard to grasp different cities’ policies. In trying to understand the mainland market, Cheung came to realise that Hong Kong plays a crucial role in facilitating information flow and exchanges. One example of this is the Hong Kong Trade Development Council’s GoGBA one-stop digital platform, which offers business information through a WeChat mini program to businesses eager to make a foray into the GBA market. Start-ups can access all kinds of information and even make comparisons among different cities via the platform. It is much more convenient than before, when they had to browse individual cities’ websites for information. Furthermore, most Hong Kong websites provide bilingual information, which is particularly useful for expatriates eyeing the mainland market. On the part of the government, the We Venture initiative and the Innovation and Technology Commission run various funding schemes and resource centres to help start-ups. As well as providing R&D support funding, they also offer guidance and professional market consulting services to start-ups.

Seaplane Hong Kong also actively participates in start-up competitions and makes use of the government’s Technology Voucher Programme and the Greater Bay Area Youth Employment Scheme to secure seed funding and save costs. In 2021, Seaplane Hong Kong was selected as a beneficiary of the IDEATION programme1 of the Hong Kong Science and Technology Parks Corporation (HKSTP), under which it is entitled to funding support, the use of co-working space and participation in various types of training. Start-ups in the programme not only save on rental expenses, but can also increase their exposure by joining HKSTP’s events and exhibitions.

According to Cheung, Hong Kong has been rather conservative when it comes to promoting the application of technology compare to mainland China, which could act as a constraint on start-ups trying to innovate their business models and services. Expressing his desire for Hong Kong’s laws and regulations to move with the times and the latest technological developments, Cheung said: “Take unmanned vehicles as an example. Many countries have already legislated on legalising the use of fully autonomous vehicles. Under Hong Kong’s current legal framework, however, unmanned vehicles cannot be registered or licensed.” Cheung noted that while the slow legislative process is somewhat disappointing, the government has started to make determined efforts to catch up, for example the introduction of consumption voucher with electronic wallets, public transport system payment with QR code. Unmanned vehicles pilot projects have been rolled out to promote the application of new technologies – an example of this being the trial runs of unmanned vehicles in the HKSTP and West Kowloon Cultural District.

Underlining how important this issue is, Cheung said: “Regulatory issues present the biggest challenge to any technology startup company working in a highly regulated environment, as countries around the world have different laws which are not aligned. While waiting for Hong Kong to enact a law on unmanned aircraft, we will first use existing regulatory framework, and apply for a helicopter licence to offer an air taxi service flown by a pilot. After the relevant legislation has been enacted and we have obtained an unmanned aircraft licence, our pilots will gradually be replaced by unmanned technology.” For now, Seaplane Hong Kong has yet to discuss the project with the Civil Aviation Department and Transport Department. But Cheung is confident that once the infrastructure and legislation are in place, Seaplane Hong Kong is poised for phenomenal growth. In his view, unmanned aircraft will not only provide a completely new transport option, but also reshape the tourism landscape and have a revolutionary impact on society.

1 The IDEATION programme of HKSTP is a support fund dedicated to nurturing technology talent for the future. Every year, applicants with new and practical ideas in the innovation and technology sector are selected to receive a one-year seed funding and other resources to help them establish their platforms and turn their ideas into reality.