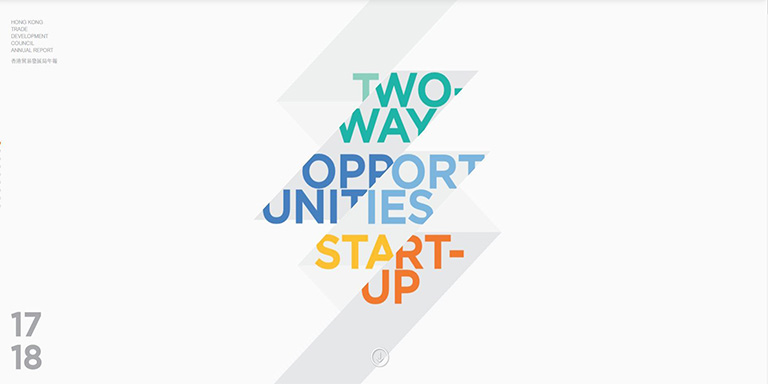 The 2017/18 Annual Report summarises the wide range of promotional events and activities the HKTDC conducted to support Hong Kong business and SMEs.

The Hong Kong Trade Development Council (HKTDC) recently published its 2017/18 Annual Report, highlighting its activities held during the past financial year ending March 2018, including promotions for the Belt and Road Initiative.

The Council’s work and achievements, as well as key objectives for the immediate future, are detailed in the Annual Report, which was tabled in the Legislative Council in early July.

The Report outlines the HKTDC’s work in promoting Hong Kong’s unique strengths as a two-way global investment and trading hub, while creating business opportunities for start-ups as well as small and medium-sized enterprises (SMEs). The Report also recaps the HKTDC's global promotional initiatives undertaken during the year.

Putting “Belt and Road” in the spotlight

HKTDC Chairman Vincent HS Lo said in a message published in the Report that 2017 was a turnaround year for the global economy, with synchronised growth across regions and sectors.

He noted Hong Kong benefited from the improved conditions, as the economy grew by 3.8% in 2017 over the previous year. The HKTDC, however, remained vigilant about adverse factors such as geo-political risks, financial volatility and social and environmental issues that could turn the tide and have a long-lasting effect.

Mr Lo pointed out that the game-changing Belt and Road Initiative, which was driving global development through economic and social connectivity, would deliver opportunities that benefit the Hong Kong economy.

He said the HKTDC had worked closely with various stakeholders and made significant headway in expanding its global presence. Through the annual flagship Belt and Road Summit and the newly formed Belt and Road Committee, the HKTDC facilitated business collaboration and consolidated Hong Kong’s role as a commercial hub in Belt and Road.

“With its long-term, global remit and its emphasis on connectivity, the Belt and Road Initiative provides the ideal framework for Hong Kong to partner with the Chinese mainland to conduct business for the Belt and Road,” Mr Lo said.

He added that the HKTDC would further develop the potential of SMEs and young entrepreneurs, and help them develop networks to find success in the competitive business environment.

In her message, HKTDC Executive Director Margaret Fong wrote about the HKTDC’s work in promoting Hong Kong as a hub for business, innovation and creativity.

“In addition to continuously enhancing our world-class exhibitions and conferences, which have long been global highlights for many sectors, we focused on strategic directions that would fuel growth in the future, such as the Belt and Road Initiative, the continued growth of Asia, the importance of branding and the transformative effect of technology on every aspect of our lives,” she said.

All these trends have created opportunities for Hong Kong to play a central role as a two-way platform for investment and trade between the Chinese mainland and the world, she added.

In terms of overseas promotion, she pointed out that the TDC launched an international business and lifestyle promotion “In Style•Hong Kong in Kuala Lumpur, Malaysia, and staged “Think Asia, Think Hong Kong” in London for the second time to showcase Hong Kong’s new lifestyle brands to the world.

“In the new financial year, economic growth may be under pressure from the many geopolitical and economic challenges. But Hong Kong will continue to adapt, innovative and thrive,” she said, stressing that the HKTDC will help Hong Kong companies open doors and create business opportunities by staying agile and proactive.

The Annual Report includes a Fast Fasts section highlighting key facts and numbers, such as the participation of about 39,000 exhibitors and 752,000 buyers in HKTDC events in 2017/18.

Major chapters include “Reinforcing Hong Kong’s Roles as a Two-Way Investment Hub”, “Capturing Opportunities in Mature and Other Key Markets”, “Empowering SMEs for the Digital Age”, and “Developing Our Organisation”.

The HKTDC Annual Report is available in online and mobile formats, with videos, multi-media images and other interactive features. It can be accessed at www.hktdc.com/annualreport2018.