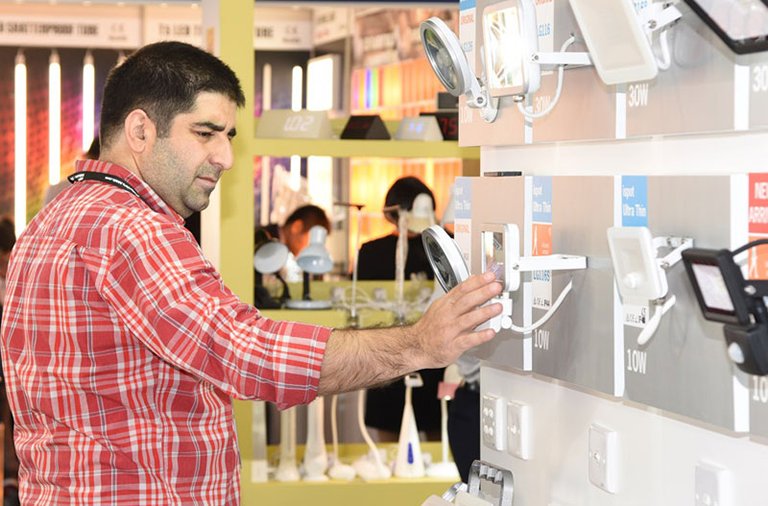 The lighting market remains promising in 2018, according to the HKTDC survey conducted at the HKTDC International Lighting Fair 2017 (Autumn Edition) and the Hong Kong International Outdoor and Tech Light Expo 2017. The Asian markets, including Japan, mainland China and the ASEAN countries, are seen as the ones with the most promising growth prospects for lighting products.

The market for household lighting is expected to do well in the near future, according to the industry players surveyed. Sales of indoor household lighting, in particular, are likely to benefit from the need to replace obsolete lighting items. LED products are likely to be popular items because of the growing level of environmental awareness, while smart technology continues to facilitate the development of the lighting industry.

HKTDC Research interviewed 386 buyers and 250 exhibitors at the HKTDC International Lighting Fair 2017 (Autumn Edition), held from 27-30 October 2017, and the Hong Kong International Outdoor and Tech Light Expo 2017, held from 26-29 October 2017. Industry players were asked for their views on the market prospects for lighting products and on the product trends they see as emerging in the coming years.

The outlook for the lighting market in 2018 remains positive, with 95% of the buyers and 97% of the exhibitors surveyed agreeing that their overall sales will either increase or remain unchanged in the coming year. Exhibitors were more optimistic than buyers, with 59% of exhibitors expecting positive sales growth (a small drop from the 62% who held that opinion at the last Lighting Fair in April 2017), compared to 40% of buyers. Only 5% of buyers and 3% of exhibitors were pessimistic about the growth of their sales in the coming year.

In terms of growth prospects for overseas markets, Japan is expected to be the brightest spot among the traditional markets in 2018. Overall 86% of the respondents active in that market rated it as “promising” or “very promising”. Taiwan is another market where lighting products are expected to do well in the coming year, with 82% of respondents rating it as “promising” or “very promising”. The South Korean market is looking less buoyant, however, with just over half of respondents (53%) expressing confidence in its growth prospects in the near future. Among the emerging markets, the outlook looks most positive in mainland China and in the ASEAN countries. In total, 93% of respondents were confident about growth in China, with 85% expressing a similar sentiment with regard to the ASEAN market.

Sales of household lighting continue to do well and this sector of the lighting market is expected to achieve the highest growth in 2018, according to 29% of the industry players surveyed (a significant rise from the 18% who held the same opinion at the last Lighting Fair in April 2017). Notably, 24% of respondents thought the LED and green lighting sector would be the one showing the greatest growth, while significant numbers also plumped for commercial lighting (16%, up from 4% in April 2017) and outdoor lighting (12%, an increase from 3%). By contrast, prospects for lighting accessories, parts and components – chosen by 38% of respondents at the last Lighting Fair in April 2017 as the sector expected to enjoy the highest level of growth – appear to have cooled, with just 7% of respondents confident that sales would grow in this sector this time around.

Demand for LED products has long been driven by the need to replace obsolete lighting items, and this may be what bolsters the confidence of industry players with regards to future household lighting sales. More than half (55%) of those surveyed thought that indoor household lighting sales would continue to benefit from such replacement demand for the coming two years (up from the 48% who expressed a similar belief at the last Lighting Fair in April 2017). Other areas which many respondents thought might benefit include indoor office and commercial lighting (cited by 30% of those surveyed), outdoor lighting other than signage and advertising lighting, and indoor industrial lighting (both of which were chosen by 21%). Automotive and transportation lighting is seen as the sector least likely to benefit from replacement demand.

The growing level of environmental awareness has led to bans on the less environmentally-friendly incandescent light bulbs in many major markets, including the US, the EU, mainland China and Australia. An overwhelming majority of respondents (84%) believed that the bans on incandescent light bulbs would benefit the sale of other lighting products. Among those who expressed this opinion, 67% specified that the sale of LED products will benefit in particular, while the rest believed that integrated electronic compact fluorescent lamps would be the primary beneficiary.

Many industries are striving to incorporate smart technology, and the lighting industry is no exception. An overwhelming majority of respondents (93%) believe that smart technology will facilitate the development of the lighting industry over the next two years (a very slight increase on the 92% who held that opinion at the last Lighting Fair in April 2017). Among those who expressed this sentiment, just over half (53%) believed that household lighting systems that are compatible with – or can be controlled by – smartphone or tablet applications will have the greatest potential for development, a rise from 45% in April 2017. Also seen as having high potential for development are smart lighting systems designed to save energy for household/industrial/commercial purposes. In total, 40% of respondents thought this would be one of the sector’s main growth areas.

The survey revealed that buyers were more satisfied with the performance of Hong Kong’s lighting products suppliers than they were earlier this year. In order to assess this, buyers rated their level of satisfaction in nine major areas on a scale of 1 to 5, with 1 denoting “very dissatisfied” and 5 “very satisfied”. Hong Kong’s suppliers performed best in terms of compliance with safety regulations and standards, and services, achieving scores of 4.06 in both areas, up from 3.88 and 3.79 respectively in April 2017. They were also highly scored for complying with environmental regulations/standards (4.05) and for the quality of their products (4.03).