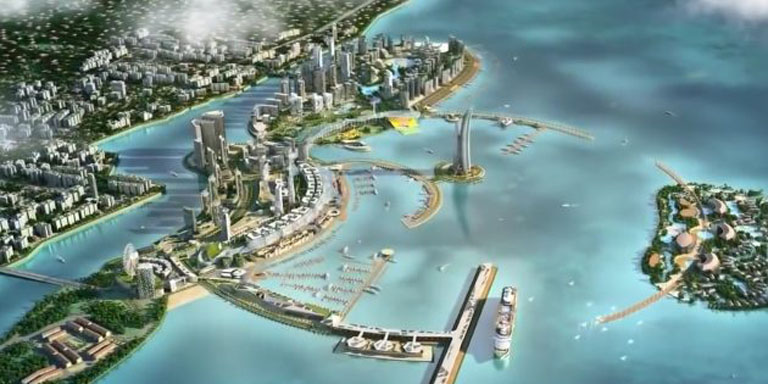 The Southeast Asian nation is a key beneficiary of funding to realise China’s economic development blueprint.

The level of Chinese investment in Malaysia grew by an astonishing 119 per cent in 2016, with a further 64 per cent surge recorded in the first quarter of the current year. Much of this increased investment relates to China's commitment to its ambitious Belt and Road Initiative, a global blueprint for boosting trade through enhanced infrastructure and streamlined export/import procedures.

At the heart of Malaysia's contribution to the Initiative is the Melaka Gateway, a US$10 billion redevelopment project, backed by Chinese investment, which will transform a series of artificial islands off the country's southern coast into a vast sprawl of shopping, commercial and residential districts, complete with state-of-the-art port and freight terminal facilities. Work on the site began in 2015, with construction expected to be completed by 2025.

It is hoped that the Gateway's freight facilities will ultimately compete with Singapore to become Southeast Asia's leading trading port. Given the site's ease-of-access to the Straits of Malacca, one of the world's busiest shipping lanes, it is considered an achievable goal.

In 2016, more than 80,000 ships passed through the Straits, before docking in Singapore, just 200 kilometres away from the Melaka project. Once the Gateway is completed, it is estimated that up to 100,000 vessels will bypass Singapore in favour of the upgraded Malaysian facilities.

The project is being managed on a joint-venture basis by two state-funded firms – KAJ Development (KAJD), a Malaysian real-estate company, and Powerchina, a Beijing-headquartered specialist in infrastructure development. Its ambitious scope will see three artificial islands constructed off the coast of Bandar Hilir, close to Palau Melaka, and the substantial redevelopment of one natural island. While KAJD is the official master developer, it is said to be consulting with Powerchina on all issues related to the project, including investment, development and construction.

According to the official blueprint for the Melaka Gateway project, the completed site will consist of 12 zones, including designated areas for hotels, malls, restaurants, theme parks, museums, sports centres and commercial districts. Its centerpiece will comprise an international cruise terminal, Southeast Asia's largest marina, luxury residences, a multipurpose deep-sea port and a maritime industrial park.

Under the plan, Island One will be dedicated to tourism, entertainment, commercial and property development, while Island Two will be home to a Free Trade Economic Zone that aims to establish itself as Southeast Asia's premier international business and financial centre. Island Three – the natural island of Pulau Panjang – will be the designated site of the project's deep-sea port facility, largely on account of its strategic access to the Straits of Malacca.

The final site, Island Four, has been reserved for the establishment of a maritime industrial park focusing on marine engineering and manufacturing, as well as container terminal and port logistics. It will also function as a bulk and break-bulk terminal, while also offering shipbuilding and ship-repair facilities.

Designated as a Priority National Project under the terms of Malaysia's Economic Transformation Programme, the Gateway project has already secured some MYR42 billion (US$9.8 billion) in funding. Once completed, it is expected to attract about 2.5 million visitors a year, while providing full-time employment for up to 45,000 people.

The project is one of the most high-profile of the joint initiatives agreed between Malaysia and China during the Malaysian Prime Minister's official visit to Beijing last November. Overall, Malaysia is considered to be one of the key beneficiaries of China's commitment to fund infrastructure development throughout the ASEAN region, in line with the priorities of the Belt and Road Initiative.