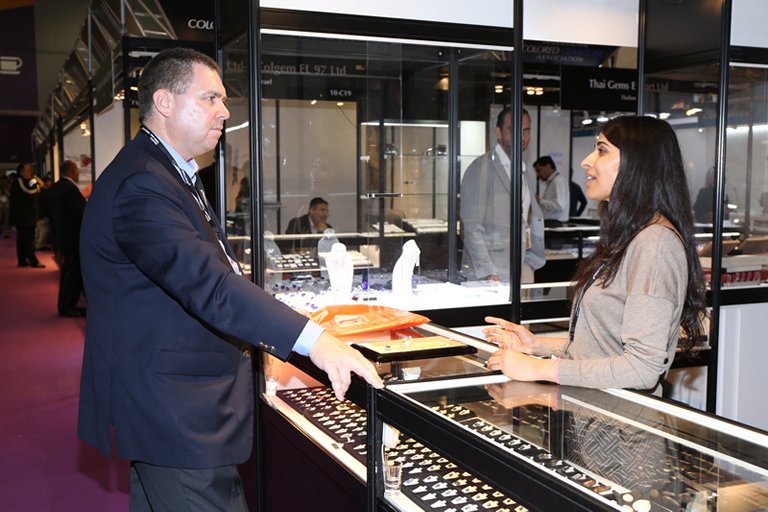 International buyers see the Chinese mainland and North America as the more promising markets for 2016, followed by Western Europe and the Middle East. However, compared with last year, buyers have less confidence towards most markets. The only market attracting growing optimism is North America.

They also confirm a few prevailing changes in consumer behaviour – consumers are increasingly concerned about quality, craftsmanship and product design, and are more inclined to carry out price comparisons and look for mix-and-match fashion jewellery.

The trend of jewellers selling online continues and items sold, or expected to be sold, through online platforms are increasing in value – more diamonds but less karat-gold jewellery and pearl jewellery are being sold online compared with last year.

The jewellery sector anticipates sales will weaken in 2016. Just 15% of buyers and 14% of exhibitors expect an increase in their overall sales this year, down from 27% and 21%, respectively, last year. In contrast, 31% of buyers and 49% of exhibitors anticipate a fall in sales in 2016, up from 15% and 31%, respectively, in 2015. So while both exhibitors and buyers are more pessimistic than optimistic towards sales performance this year, pessimism among exhibitors is higher.

Upward pressure on exhibitors’ production or sourcing costs persists, with a net of 44% (50% minus 6%) of respondents expecting an increase for 2016, the same net percentage (49% minus 5%) as last year. Yet for 2016, exhibitors expect to absorb the higher costs, as more of them anticipate their FOB (free on board) prices to fall (18%) than rise (15%). Buyers, on the other hand, still expect their sourcing costs to be higher in general, with 22% expecting an increase and 16% anticipating a decrease. However, the margin of 6% is much lower than last year’s 28% (34% minus 6%). The retail price of jewellery is generally expected to go down in 2016, with 23% of buyers predicting a fall against 14% who anticipate a rise.

As part of the survey, buyers were asked to give their views on the prospects for the market on a scale of one to five, with one indicating that the market will be “very unpromising” for the next two years, and five indicating “very promising”. The Chinese mainland (3.35) and North America (3.34) were rated as the most promising markets, followed by Western Europe (3.22) and the Middle East (3.21).

Compared with the 2015 survey, North America is the only market where buyers have gained confidence, its rating inching up to 3.34 from 3.31. However, all other major markets, including the Chinese mainland, see declines. Despite a weaker outlook, buyers’ ratings of all markets remain above 3, the neutral level.

According to Ms Fan Qin Fen, Managing Director of 21Gem, one of the participants of the HKTDC Hong Kong International Jewellery Show, the overall jewellery demand in China is expected to slow for the coming year amid a weaker economic outlook. Retailers are destocking. However, she believes the jewellery market potential in China is far from fully tapped as the country has a rigid demand for wedding-related jewellery and consumers are hungry for new products and designs.


Quality and Craftsmanship Most Valued

In the 2016 survey, buyers agree on a number of changes in consumer preferences. On a scale of one to five, with one denoting “completely disagree” and five denoting “completely agree”, buyers indicate that consumers are increasingly concerned about quality, craftsmanship, product design and price, all scoring ratings above four. Yet after-sales service / warranty and product branding are also major concerns, with ratings of 4 and 3.91, respectively. In fact, buyers’ ratings are higher in all aspects of the 2016 survey than in the previous year’s poll.

Along with a weaker market prospect, buyers overwhelmingly agree that consumers conduct more price comparisons (3.95, up from 3.86 in 2015). Also, buyers believe that consumers increasingly look for mix-and-match fashion jewellery (3.93 from 3.61), and buy fewer, but better, products (3.85 from 3.84).

Even though online shopping is less common for jewellery than other products, buyers agree that consumers increasingly rely on online reviews / social media opinions for product information (3.83 from 3.79) and make more online purchases (3.76 from 3.73).

Selling through e-tailing is a growing trend, although it appears to be less common for jewellery items than in other sectors. In the 2016 survey, 18% of respondents are reported to be e-tailers, up from 15% last year. For those who have not engaged in e-tailing business, 9% say they will offer e-tailing within the next 12 months, the same percentage as last year.


Among those who either engage in, or are going to engage in, e-tailing, the majority say they sell, or will sell, diamond jewellery (35%) through this platform, followed by gemset jewellery (31%) and diamonds (16%). Items sold, or expected to be sold, through e-tailing appear to be moving towards a higher value. Compared with last year, diamonds have gained to 16%, from 11%, whereas silver jewellery, karat gold jewellery and pearl jewellery all have seen substantial declines in their percentage shares.

Buyers are highly satisfied with jewellery suppliers from Hong Kong. On a scale of one to five, buyers gave ratings of 3.77 to 4.02 across seven performance indicators in the 2016 survey. They are especially satisfied with Hong Kong jewellery suppliers’ quality (4.02), and design and technology (4.00). However, ratings on quality, variety, craftsmanship, service and brand have declined compared with those in the 2015 survey.