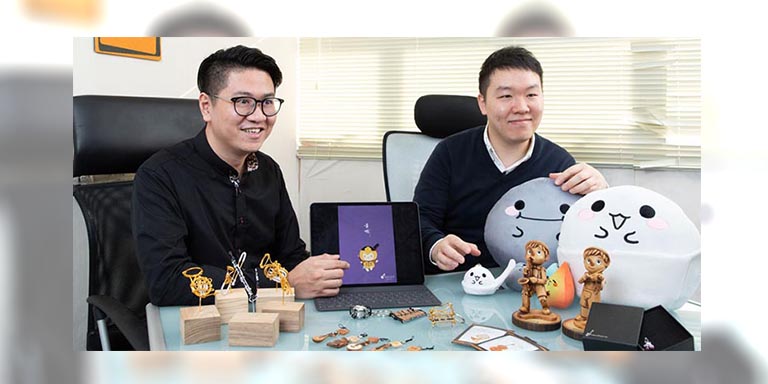 Musicians harmonise melodies and visual arts to turn out keepsakes.

The power of music transcends boundaries between languages, races and professions, and so it has brought a group of musicians and designers to work together at Musician Designer – a Hong Kong-based gift design and production company. Driven by passion, the team designs gifts with a musical theme to jazz up the lives of urbanites consumed by work.

“As a musician, I despise some designs on the market, such as those created by designers who claim to know music but end up flipping musical notes for the sake of aesthetics, presenting incorrect musical information. It was this lack of authenticity that made me commit to creating unique gifts that give accurate information about music,” said Calvin Ng (main picture, left), who embarked on his entrepreneurial journey and set up Musician Designer in 2006 while studying classical music at the Hong Kong Academy for Performing Arts.

Drawing from his musical background, Mr Ng designed a series of innovative musical gifts by referencing the characteristics of different instruments and combining them with everyday life stories of musicians.

“Take ‘Bow’ for example. It is one of our illustrations that are very well received in the European markets. The inspiration came from a trivial fact that the hair used in violin bows comes from horses. That’s why we depicted a trembling horse being frightened that its tail hair will be trimmed off by humans. These are some jokes that would resonate with musicians and bring a smile to their faces,” he said.”

Musician Designer’s Creative Director Wilson Ma (main picture, right), who is also a musician, said the company’s earlier works focused on music education, such as the creation of “Rhythm Kingdom”, a cartoon character for the Hong Kong Philharmonic Orchestra.

“Our creations need to be educational. You’ll see a musical note on Rhythm Kingdom’s head. Great precision is involved — the stem [of the note] goes up when the face tilts left, and drops when the face turns right,” he said.

“We insist on paying attention to such details not only because we are committed to design aesthetics but also music education.”

Rather than making their products too commercial, the team wants to hit just the right note in balancing education and the arts.

“Many people who enjoy music might not have a wealth of musical knowledge. Some people will refer to brass instruments as ‘trumpets’ but there are actually other categories, such as the French horn, trombone and tuba. When we first started creating, we focused on the basics and introducing different types of instruments to the public,” Mr Ma explained.

Having succeeded with a range of musical gift items, in 2009 Mr Ng decided to focus on beefing up own brand designs and selling them globally.

“We started out designing and manufacturing products for other brands, including arts groups like the Hong Kong Academy for Performing Arts, Hong Kong Philharmonic and Asian Youth Orchestra. We helped them with producing one-of-a-kind gifts to open up their revenue streams. That got us thinking about concentrating on our own brand as music is a universal language,” he recalled.

The company’s bestsellers include keychains which are made with metal wire and feature different instruments that are miniaturised to scale. Its “Music Wooden Strap” series of accessories features hand-carved hard-wood designs, some of which are fitted with strings for a more authentic look. There is also a figure series, the “Pinocchio”, which is hand-made in Italy with wood and pulp. The craftsmanship gives each figure a unique look.

“We exhibited in various big cities. First, we went to Los Angeles, then Frankfurt, St Petersburg, Tokyo, Guangzhou, Beijing and Shanghai. We kept participating in gifts events and music shows to promote our products and brand story abroad,” he said.”

Whether it’s the “music wooden strap” or “music metal pin” accessories, the “music wire” key chains, the Pinocchio displays or other stationery items, Musician Designer has managed to strike a chord with music lovers. Its products have been sold worldwide through musical instruments companies Martin Guitars, Salvi Harps and Yamaha. The United Kingdom and Japan markets are Musician Designer’s two biggest markets, making up roughly 60% of overall sales.

Having built an international reputation, Musician Designer shifted its attention back to the Hong Kong market several years ago. For four consecutive years since 2018, it has participated in the Hong Kong Trade Development Council’s (HKTDC) DesignInspire. The Hong Kong exhibition of creative works has provided the company with greater exposure and business opportunities, according to Mr Ng.

“We met most of our Hong Kong clients through DesignInspire. They include big names like Joint Publishing HK, Chung Hwa Book Company and The Commercial Press,” he said.

“Although last year’s DesignInspire was held online [amid the pandemic], the organiser still lined up business matching sessions for us and we received enquiries from customers based in Mainland China.”

Like other businesses, Musician Designer has inevitably been affected by the pandemic, which has put global exhibitions on hold. Still, both executives are firm believers that crises and opportunities co-exist.

“We have always focused on producing gifts that are sold on tourist sites, at museums and concert halls. These venues have been forced to shut during the pandemic and we got no income at all. That’s why we have shifted to selling directly online,” shared Mr Ng.

“We teamed up with local illustrator ‘Oh… little sweet’ on a series of gifts, which has been doing well – a testament that consumers still appreciate good designs amid the pandemic.”