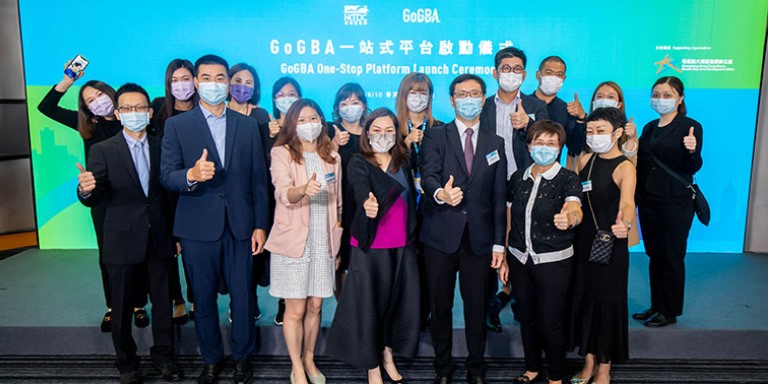 The Greater Bay Area development strengthens Hong Kong’s role as a super-connector between Mainland China, Southeast Asia and the world.

Early in Mainland China’s reform drive that began in the 1970s, Hong Kong served as the showroom for factories in Guangdong.

Since then a rapid move up the value chain by Guangdong firms, the communications revolution, a massive research and development drive by mainland companies and government and the change in north-south flows of goods and funds from one way to two way have transformed Hong Kong’s role.

The city has become a super-connector between the mainland, Asia –especially Association of Southeast Asian Nations (ASEAN) members – and the world at large. And development of the Guangdong-Hong Kong-Macao Greater Bay Area (GBA) has underscored that transformation.

The platform comprises a digital platform consisting of the GoGBA WeChat mini programme; advisory services and training; as well as relevant online and offline activities.

The platform includes the GoGBA digital platform, which comes in the form of a WeChat mini programme that is convenient and easy to use. It offers useful economic and trade information including government policies, business support and preferential treatment, said Dr Lau.

The digital platform also includes practical tools such as pandemic updates for GBA cities, interactive maps, cross-border transport details and a counter for the number of days the user has spent in the mainland, which can help them arrange GBA trips from a taxation perspective.

For offering advisory and training services, the HKTDC GBA Centre had been established at the HKTDC’s Shenzhen office, Dr Lau said. The HKTDC had also signed cooperation agreements on the introduction of GoGBA Business Support Centres in Shenzhen’s Qianhai, Guangzhou’s Nansha, Zhuhai’s Hengqin, Dongguan and Zhongshan. The HKTDC targets to introduce the centres in all nine mainland cities in the GBA, establishing a comprehensive support network that can connect companies with partners and consultants from across the region.

In addition, the HKTDC’s Transformation Sandbox (T-box) programme will extend its services from Hong Kong to Shenzhen and other cities in the GBA. Together with the Digital Academy and E-Tailing Academy, the HKTDC will provide advisory workshops related to e-commerce and digital business as well as marketing solutions and other digital platforms.

The GoGBA platform also features online and offline activities, including the debut Guangdong-Hong Kong Co-operation Week to be held in the GBA in December. The event will include SmartHK in Guangzhou and ChicHK in Shenzhen, which will promote Hong Kong services and products.

Chen Yuehua, Deputy Director of the Guangdong Provincial Department of Commerce, said that under the GBA development plan, Guangdong province would cooperate with Hong Kong and Macao to build the region into an international innovation and technology centre. He said the province will expand support services for foreign businesses.

Hong Kong, as an international financial, logistics and commerce centre, plays the role of a super connector, linking the GBA with international markets, which will help promote China’s new dual-circulation economic development model, said Mr Chen. The model features domestic demand as the main economic growth driver, with domestic an external demand reinforcing each other.

At the webinar, business development facilitator Tricor Hong Kong’s CEO Joe Wan said the GBA is a huge market undergoing rapid economic development. “The Greater Bay Area … provides many opportunities for enterprises, and Hong Kong acts as a super liaison. With professionals in finance, law, commerce, and more, we can assist companies in exploring the Greater Bay Area market."

Tricor’s services include assisting companies from establishment to listing and the firm has offices in 13 locations in the mainland, including Guangzhou and Shenzhen. "For Hong Kong small and medium-sized enterprises, the GBA has huge opportunities but there are also many challenges. For example, there are different business regulations in the nine mainland cities,” said Mr Wan. "Opportunities have increased with the rapid development but the turnover rate of talent is also high. Amid the complicated recruitment rules in the mainland, SMEs [small and medium-sized enterprises] can cooperate with reliable partners in the local area to help recruit talents."

For overseas enterprises, the GBA is the ideal entry point into the mainland, which offers ample business opportunities in various sectors, including sustainability.

Ms Chui noted that China’s 14th Five-year Plan covers food-waste treatment, which shows the mainland market has good potential. Enquiries from the mainland had increased especially during the pandemic. Hong Kong is an ideal platform for overseas companies to enter the huge mainland market and explore business opportunities, she said.

Jefrey Hironaka Carvalho dos Santos, Managing Director of Mundial Asia, a unit of Brazilian kitchenware company Mundial, said that the company regards the city as a window to the mainland market, that that Hong Kong has helped the firm understand the culture of the mainland and Asia as a whole.

He said Hong Kong's stable financial system, tax advantages and other policies are helpful to businesses while the city’s close ties with other GBA cities will help Mundial further develop the mainland market. Belt and Road pivots on GBA