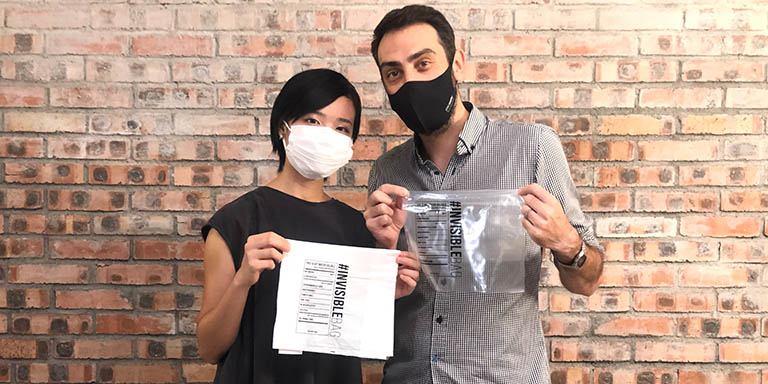 Seeking to cut down on single-use plastics, this start-up’s plastic dissolves in hot water.

Extra packaging might be around for a while in the post-COVID era but a new Hong Kong start-up has launched a biodegradable, water-soluble alternative to plastic bags and wrapping which could be a game-changer in the war against waste.

Distinctive Action was established in February 2020 after married couple Devana Ng (main picture, left) from Hong Kong and Flavien Chaussegros from France, together with friend Jorge Torres from Colombia, sought a solution to the rubbish they encountered on hiking trails in Hong Kong.

“We saw no other people, but plenty of discarded plastic,” Ms Ng said. She previously worked in marketing for a beauty company and was already concerned about excess packaging ending up in landfills. “We thought, how far could we go just by picking up the trash? You have to reduce the source, so we looked for a solution.”

That solution was a plastic bag that dissolves in water, launched on the market in May 2020.

Early in their research the founders discovered polyvinyl acetate (PVA). Invented in the 1920s by two German scientists, it was commercialised in the 1950s by a Japanese company for applications such as embroidery, laundry pods and medicine-capsule coatings.

Partnering with a manufacturer to bring this material to Hong Kong, the company added plant-based starch to create a non-toxic, environmentally safe bag, branded #INVISIBLEBAG, which behaves like regular plastic but dissolves in water at 80C and above.

“In a container for example, it will dissolve within a few minutes without residues,” Ms Ng said. Aside from being water soluble, the product is also compostable and biodegradable.

Initially targeting the garment and retail industries – sectors which Ms Ng says cannot avoid using plastic packaging – the company currently has three products (one shopping bag and two garment bags in different sizes) sold online through its e-commerce platform. To keep the products accessible for smaller companies, the minimum order is 200 bags. The bags can hold as much as 4 kilograms and may be printed with a company’s logo using eco-friendly ink.

In business for just a few months, Distinctive Action already supplies more than 100 customers around the world. It spreads the word largely through social media, partnering with different communities such as industry advocate G.R.E.E.N Hospitality, bloggers and Instagram influencers. It is also involved in beach clean-ups to promote the message to more people.

“We are not limited to talking about plastic bags, but packaging of all sorts,” Ms Ng said.

Alternatives such as #INVISIBLEBAG are currently two to three times more expensive than permanent plastics but she believes brands will be willing to pay in pursuit of the common good.

“Already we have avoided 250,000 pieces of plastic going into landfill. The trend to reduce consumption of plastic is here, and companies cannot afford to miss it on their agenda.”

Find out more about green technologies and products through the Hong Kong Trade Development Council’s Eco Tech exhibition, part of Autumn Sourcing Week Online which runs from 16 to 27 November this year. Jab draws in one drawer