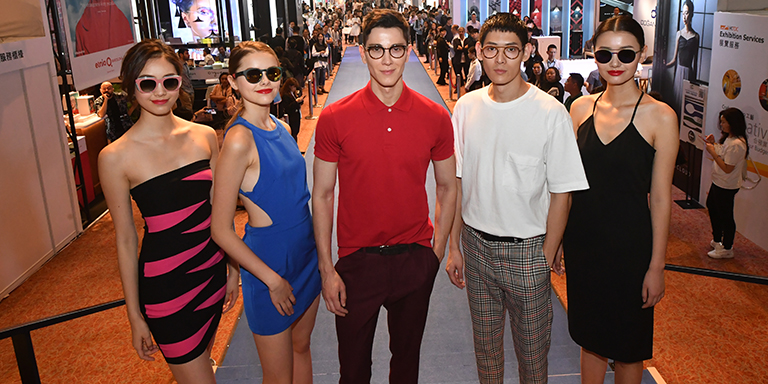 The world of eyewear is not immune to disruption by start-ups, as attendees at this year’s optical fair found out.

Advances in both optometry and information technology are driving rapid changes in the eyewear industry; professionals and traders in the optical world converged on Hong Kong in November to learn more.

As technologies continue to evolve, the industry is focusing on smart eyewear. The fair showcased a range of eyewear products employing innovative technologies, bringing it in line with changing market demand. Local brand OSSII SOUND showcased its sports eyewear that uses bone conduction technology. Johnnie Li, Founder of the brand, said the company had met new buyers interested in smart products from Canada, India, Japan, Korea, Thailand and the United States. “Nine buyers have already purchased our eyewear,” he said.

Virtual eyewear customisation software company nuVision joined the fair for the first time in the IT Solutions, Shop Fittings & Equipment Zone. Co-founder James Lin said the company had signed distribution agreements with five brand owners from the mainland and Southeast Asia during the fair, while more than 10 buyers had placed orders to develop their customised platforms.

The 17th Hong Kong International Optometric Symposium held during the fair was certified by the Council on Optometric Practitioner Education (COPE) for the first time this year. Under the theme “Advancements in Optometric Specialties”, the symposium explored topics including aviation optometry, sports vision, and the application of artificial intelligence (AI) in ophthalmology. Haotian Lin, Director of AI & Big Data at the Zhongshan Ophthalmic Center of Sun Yat-sen University in the mainland, examined AI applications in congenital cataract treatment as well as the world’s first AI robot consultation.

Start-ups are creating a disruptive wave in the traditional retail eyewear market, said international research institute Coresight Research as it revealed the latest trends in the global eyewear market at a seminar held during the fair.

The global eyewear market was valued at US$127 billion last year and is forecast to reach US$141 billion by 2023, according to Coresight, which specialises in delivering data-driven market insights for a range of industries globally. Bricks-and-mortar stores currently account for 87% of global retail eyewear sales as patients prefer personal services such as measurement and adjustment, while online sales – which make up the rest of the market – continue to experience steady growth.

Albert Chan, Head of the Hong Kong Office for Coresight, explained that in the essentially oligopolistic global eyewear industry – which has been long dominated by the four giant players EssilorLuxottica, GrandVision, Johnson & Johnson and Alcon – start-ups are beginning to disrupt both the online and offline eyewear markets in innovative ways.

One method of disruption is to use direct-to-consumer (D2C) sales models to bring down the retail prices by up to 90%, Mr Chan said. This appeals to more price-conscious consumers who are looking for cheaper alternatives to speed up the replacement cycle.

One way to help eyewear manufacturers cut production times significantly and bring a wider variety of products to consumers is to adopt 3D printing, he said. This aligns with the growing trend for product customisation and personalisation.

Different technologies are also helping to open new doors for start-ups in the eyewear market, with Mr Chan recognising the growing popularity of smart eyewear that has encouraged technology providers and lens manufacturers to develop smart optical solutions for augmented reality (AR) glasses.

While spectacle lenses, eyewear frames, sunglasses and contact lenses are named by Coresight as the four key product categories in the global eyewear market, sustainable eyewear is seen to have great growth potential in the future as people become increasingly motivated to live an eco-friendly life. “This has created space for start-ups to develop products that differentiate themselves from their mass-market rivals,” Mr Chan said.

Ukrainian start-up Ochis has developed what is believed to be the world’s first eyewear made from coffee grounds. The high-quality biodegradable and aromatic compound used to make the spectacle frames has gained popularity, offering a sustainable alternative in the global eyewear market.

Another example of sustainable eyewear is from Australian company Dresden Vision which has turned empty shampoo bottles into spectacle frames by using a closed-loop injection system to ensure there is no negative impact on the environment.

Affat Eid, owner of Egypt’s Joy Company, a wholesaler of eyewear frames and sunglasses, was sourcing at the Optical Fair for the fifth time. He said he found three suppliers on the first day and decided to purchase more than 10,000 eyewear items. First-time fair visitor Alfonso Gea, CEO of Spanish optical retailer Buy Well which sells eyewear from more than 100 global brands, remarked that the event had helped him find various kinds of eyewear with innovative designs. He said he had approached three potential suppliers and planned to purchase 10,000 items of different models from a new supplier.