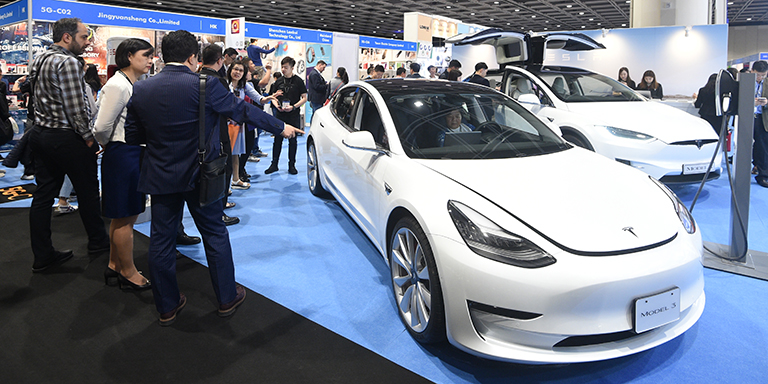 Innovators use fairs to show how their cutting-edge technologies can create smart cities and smart living.

“Smart” was the word du jour at the Hong Kong Trade Development Council’s (HKTDC) twin innovation showpieces in April – the 16th HKTDC Hong Kong Electronics Fair (Spring Edition) and HKTDC International ICT Expo. Cities, regions and lines of business are rapidly turning smart, and are eager to tell the world about it.

Benjamin Chau, HKTDC Deputy Executive Director, said: “In the digital era, innovation and technology have become mega trends and smart cities are beginning to change the way people live, work and play. To meet the demand from buyers globally, this year’s ICT Expo and Spring Electronics Fair put the spotlight on smart city solutions and cutting-edge electronic products. Sourcing and business discussions were brisk throughout both events.”

Buyers came from 153 countries and regions and there was a significant increase in the number of buyers from several markets, including Mainland China, Macao, Japan, Korea, Thailand, South Africa, Brazil, the Netherlands, Czech Republic, Russia and the United Kingdom. The Spring Electronics Fair drew more than 67,000 buyers, while 34,000 buyers attended the ICT Expo. The 100,000-plus buyers marked a 3.6% year on year increase.

To gauge the industry’s views on market prospects, product trends and hot issues, the HKTDC commissioned an independent on-site survey during the fairs that interviewed 903 buyers and exhibitors.

The survey found most respondents (96%) expect overall sales to rise (50%) or remain steady (46%) in 2019. In terms of growth prospects in major sales markets, respondents view Korea (85%) as being the most promising among traditional markets over the next two years, followed by Western Europe (79%) and North America (77%). Among emerging markets, survey respondents favoured Mainland China (77%), the Association of Southeast Asian Nations (71%) and Latin America (70%). Regarding product trends, the survey showed that electronic/electrical accessories (27%), digital imaging (13%) and audio-visual products (12%) have the highest growth potential in their major sales or export markets in 2019.

Asked about current global issues, 59% expect trade friction between the United States and the mainland will have no impact on the sector’s export performance, while 65% of respondents believe Brexit will have no impact. The survey also showed 86% of respondents are either neutral or optimistic about smart city development in Hong Kong, thanks to the Hong Kong Special Administrative Region (HKSAR) Government’s push to launch smart city initiatives.

The ICT Expo adopted the theme of Smart City • Smart Living and featured a broad range of technologies and applications. The expo featured several pavilions including those of the Office of the Government Chief Information Officer (OGCIO) of the HKSAR Government and the Hangzhou Government. The “So French So Innovative” pavilion featured more than 30 French organisations, including multinational corporations, small and medium-sized enterprises (SMEs) and start-ups.

Marie-Hélène Prévot, Vice President, Foreign Trade Advisors of France, Hong Kong Committee, said: “Hong Kong is a nice platform for companies to expand their presence in Asia and go into the Mainland Chinese market. We are keen to explore the opportunities presented by the Guangdong-Hong Kong-Macao Greater Bay Area through this expo. The pavilion is a good showcase of how French companies integrate innovative solutions into business operations, and the expo is a great event for us to meet with all sorts of professionals behind the smart ideas.”

A highlight at the Spring Electronics Fair was the new artificial intelligence (AI) & Voice Recognition zone, set up in the Tech Hall to meet the market’s demand for products and solutions related to these emerging technologies. The fair also hosted multiple seminars and networking events to give participants a better understanding of the latest technological trends and opportunities, including the anchor conference, “Tech Trends Symposium 2019 – Roadmap to the Future”.

Tuya Global Inc participated in the fair again to showcase smart home appliances and AI solutions. Co-founder & COO Alex Yang said: “We have met with new buyers from many countries and regions covering Australia, the Americas, the Middle East and Asia. Many of them have expressed their intention in cooperating with us. The establishment of the Guangdong-Hong Kong-Macao Greater Bay Area helps encourage the flow of information and resources and enhances the efficiency of overall development. Riding on Hong Kong’s role as an international financial centre, it will accelerate the commercialisation of AI and consumer related IoT [Internet of Things] applications.”

Buyer activity was brisk at both events. Kim Eui Geun, Manager/Equipment & Raw Material Purchasing Team at Korea’s Hyundai Mobis, was joining the Spring Electronics Fair for the first time. He said he found several potential suppliers of car electronics products such as air purifiers, wireless chargers, smartphone chargers, and smart watches with GPS and car-key functions. If the suppliers were suitable, he said he would probably buy 50,000 pieces per item every year.
Exhibitors included electric-vehicle giant Tesla which presented its latest car, the Model 3 (main picture).

In a flagship event, industry experts took to the stage for the “Tech Trends Symposium 2019 – Roadmap to the Future” held concurrently with the fairs to discuss technological advancements in their respective fields. In the afternoon session, titled “Futures Realised: Technologies and Innovations in Arrays of Life”, it was highlighted how the most cutting-edge areas of technology − from augmented reality to artificial intelligence − are now being used to enhance our everyday lives. Some of the most talked-about innovations are now on the brink of effecting ground-breaking changes for the consumers they reach. Panellists selected four key trends.

Using AR to excel at sports

In 2018, the global market for augmented reality (AR) and virtual reality (VR) was Rmb 70 billion (US$10.4 billion). That number looks set to grow exponentially, and is expected to exceed Rmb 200 billion by 2020, according to Kenny Cheung, General Manager and Vice President of Kopin Asia, who spoke on the topic of AR/VR.

The practical applications of these technologies outside gaming, enterprise or military applications might not seem obvious but much of that has to do with finding the right fit – literally.

“Every time I try VR, I find it is really not easy,” said Mr Cheung, explaining that the weight and cumbersome nature of the headset commonly used in VR gaming makes it impractical to wear for very long. “A lot of people think display is one of the major roadblocks to make VR and AR widely popular,” he explained.

Kopin, an electronics manufacturer based in Massachusetts in the United States that specialises in display devices for mobile electronics, has refined its AR hardware to mimic the style of ordinary glasses, said Mr Cheung. The result is Kopin’s SOLOS smart sunglasses, a stylish line of wearables designed with professional cyclists and runners in mind. Developed with feedback from Team USA Cycling, these sunglasses can deliver real-time information to the wearer about pace, heart rate and distance travelled, among a host of other useful features.

Giving stroke patients their voice back

Speech is something so integral to our everyday lives and how we experience our world that we often don't stop to consider its complexity. Research by Helen Meng, the Patrick Huen Wing Ming Professor of System and Engineering & Engineering Management at the Chinese University of Hong Kong (CUHK), has focused intensely on speech recognition and synthesis, in the pursuit of developing assistive applications for people suffering from speech disorders.

Presenting her CUHK research, she detailed how she developed a world-leading program capable of understanding the speech of people suffering from dysarthria, an impeded articulation of speech that results from stroke or cerebral palsy.
By working with patients with dysarthria, and assisted by deep learning, her team now boasts a speech-recognition program capable of understanding the words of affected patients with about 70% accuracy, representing a life-changing development for anyone suffering from loss of speech.

Autonomous driving is the future of our roads but it will take more than just robots in cars to get there. Charles Cheung, Deep Learning Solution Architect and Data Scientist at American technology company NVIDIA, outlined the incredible scale of data collection, analysis and testing that was required to make autonomous vehicles a reality.

“Actually, we cannot just put our AI model into the cars and let it run through the miles to wait for the result,” said Mr Cheung, explaining that it could take more than 500 years to acquire the necessary training to match a human’s performance of safely operating a vehicle. Instead, said Mr Cheung, his team developed NIVIDIA DRIVE Sim − simulation software that tests different scenarios and environments without the need for an actual road test in the real world.

By artificially building and manipulating the environment within which an autonomous driving model operates, the model becomes more intelligent, nimble, and safer for the individuals who will ride in the self-driving cars of tomorrow.

About 80% of people affected by sleep apnea, or irregular breathing patterns during sleep, aren’t aware they suffer from the problem. What might seem like an annoying snoring issue could actually be a medical condition that can develop into more serious ailments such as depression, heart disease and diabetes.

Previously, to medically diagnose the condition, sufferers would need to sleep in a lab for a nocturnal polysomnography, or sleep study, that could prove expensive in terms of time, money and resources. Ms Fok said wearable technology paired with cloud data collection represents a perfect example of the impact smart innovation can have in the quality of life of patients.