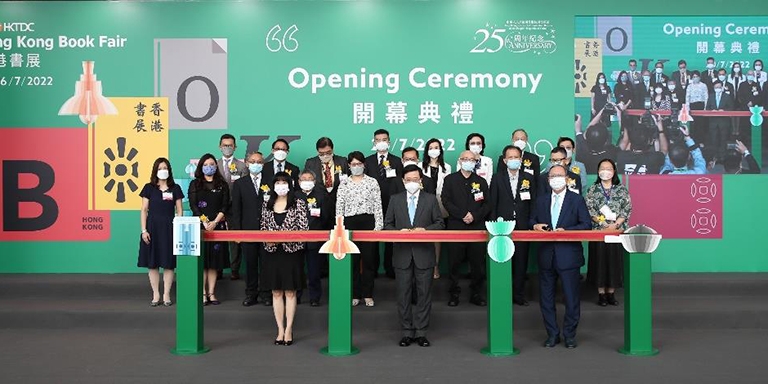 Three events brought together reading, recreation and snacking to draw a strong interest from the public during the summer break.

As Hong Kong gradually eases restrictions following the fifth wave of the COVID-19 pandemic in the city, large-scale public events are making a comeback. The HKTDC Hong Kong Book Fair. which in previous years drew as many as a million visitors, marked the largest such event held in the city so far this year.

As an event celebrating the 25th anniversary of the establishment of the HKSAR, this year's Book Fair, under the theme “History and City Literature” and with the tagline “Reading the World: Stories of Hong Kong”, gathered numerous acclaimed writers and hosted more than 600 seminars and cultural activities at the HKCEC and across the city to celebrate the joy of reading.

Dr Lam said: “As the first large-scale public event this year, we hope the Book Fair can help bring positive energy to the community. This year’s theme is ‘History & City Literature’. The fair’s Art Gallery features five ‘History Writers’ and 25 books from the ‘City Literature’ category chosen to mark the 25th Anniversary of the HKSAR. We hope the public can discover and be inspired by the city’s historical development.”

In keeping with this year’s Book Fair theme, four exhibitions were staged at the Art Gallery in the HKCEC Hall 3 Concourse. The “History Writers” exhibition features the works of five outstanding writers – Ting Sun-pao, Lui Tai-lok, Elizabeth Sinn Yuk-yee, the late Yeh Ling-feng and Cheng Po-hung. A selection of their books, out-of-print works, manuscripts and precious memorabilia went on display to help readers understand the philosophy and inspiration behind their lives and works.

Ting drew on the past in a seminar “My Journey on Historical Research”, while Lui analysed the historical context of Hong Kong from multiple perspectives in “Hong Kong Society’s Social Landscape: Description” (23 July). Sinn discussed the ups and downs experienced in her historical research in “Hardships and Joys in 40 years” (24 July). Yeh Zhong-min, attending the Book Fair on behalf of her late father, spoke about his research into Hong Kong's literature and history in “Hong Kong – My Second Home” (25 July). Meanwhile, Cheng discussed the city’s culinary delights and entertainment development in “A Century of Hong Kong Food and Delicacies” (20 July) and “A Century of Hong Kong's Entertainment" (25 July).

“City Literature” featured 25 works about Hong Kong by renowned local writers, including Xiao Si, Xi Xi, Eileen Chang, Shu Xiang-cheng and Liu Yi-chang. There was an interactive exhibition that took readers on a tour of the city from multiple perspectives through words and texts.

The “Eight Seminar Series” continued to be a highlight of the Book Fair. Topics covered a wide spectrum of literary interests, including “Stories of Hong Kong”, “Renowned Writers”, “English and International Reading”, “World of Knowledge”, “Children and Youth Reading”, “Lifestyle, Hong Kong Culture and History”, and “Personal Development and Spiritual Growth”. Authors and booklovers were able to interact and exchange ideas at the seminars.

Partnering with Ming Pao and Yazhou Zhoukan newspapers, the HKTDC again organised the “Renowned Writers Seminar Series”, inviting leading authors to share on their creative journeys and insights. Documentary photographer Liu Heung-shing shared his insights on capturing the visual history of the city in person on the opening day. Art curator Li Pi described how the M+ Museum had made Hong Kong a cultural capital in the region, while Hong Kong writer Shum Sai-shing reminisced on the late Ni Kuang in the seminar “Recalling Our Literary Giant – Ni Kuang” (23 July).

The “English and International Reading Series” supported by Book Depository, an international online bookstore, invited a number of famous English- and foreign-language writers to host virtual and in-person seminars, helping readers learn more about foreign cultures. Two British writers – Clare Mackintosh and Gillian McAllister – met reading enthusiasts virtually on the opening day. Mackintosh described the way she moved from being a police officer to an accomplished crime writer, while McAllister discussed her creative journey and the sources of her ideas.

The Book Fair featured numerous thematic zones, including General Books Pavilion, English Avenue, University Press Square, Spirituality Zone, Children’s Paradise and more. The International Cultural Village was attended by representatives of various consulates in Hong Kong to promote their own cultures and publications. The Consulate General of France in Hong Kong and Macau presented French culture through classic works of art in “Uncovering the Smile of the Mona Lisa”, while the Consulate General of Switzerland in Hong Kong and Macau introduced the attractions of Switzerland in the seminar “Exploring Switzerland through Train Rides”. The Virtual Classroom continued to cater to the new normal in teaching. For instance, a Hong Kong start-up highlighted its research and development into cloud-based interactive virtual classrooms, providing artificial intelligence and programming certificate courses and helping schools promote science and technology education.

Alongside the Book Fair, the HKTDC has collaborated with numerous partners, including the Leisure and Cultural Services Department, publishers, cultural and educational institutions, shopping malls and cafes, to organise a series of more than 300 cultural events in the 18 districts of Hong Kong as part of Cultural July. This year, Chocolate Rain stickers have been designed for the event. Participants can redeem gifts at the Book Fair after collecting a full set of four stickers.

In the Sports Hub zone visitors enjoyed an e-sports racing competition and simulator trials, lacrosse demonstrations and mini-games. Exhibitors from the Health & Fitness zone offered free massages and a massage-chair experience while Fun & Learn promoted boules and petanque along with a 3D printing workshop. Hong Kong racing driver Darryl O'Young and members of the Hong Kong Baseball Association had sharing sessions at the expo.

The Japan National Tourism Organization (JNTO) and nine Japanese prefectures and cities again joined the Japan Pavilion to showcase the country’s attractions and cultural characteristics. JNTO's experience hall included a Japanese hotspot map to display the featured attractions and delicacies of many counties and cities. Visitors could choose their own Japanese tour route from the map according to their preferences. Meanwhile, Kadokawa Corporation, among the top four publishing houses in Japan, collaborated with Tottori Prefecture to introduce local cultural highlights and bestselling books and magazines from Japan. There were also sessions on traditional Japanese dance, strategies for travelling in Japan and more to showcase the charm of Japanese culture.

Photography World and Board Games showcased a variety of products, including the world's first F2 aperture mirrorless camera with a high-magnification zoom lens, Kodak cameras, and fascinating table games with Hong Kong themes.

The HKTDC Education & Careers Expo was held at the HKCEC from 21 July to 24 July, running in parallel with the Book Fair and other events. Youngsters and jobseekers accessed the latest information on education and career opportunities at this one-stop event.