The Greater Bay Area: Bin with the New

If you are going into business you might as well think big, and so it is with ORCA Asia, the company that ventured into the Hong Kong – and by extension mainland – markets just three years ago with the Canadian food waste technology, ORCA, and the stated aim of “taking every garbage truck hauling food waste, off the road”. To turn such a bold vision into reality will no doubt require a killer business instinct – a bit like the famous fictional whale with which ORCA shares its name.

ORCA is a unique hyperlocal waste technology solution that not only provides a space-saving, environmentally-responsible way of disposing, treating and tracking food waste, it does away with the need to store and transport it. How? Because the technology's hardware is connected directly to the sewerage system, it can be installed in the smallest restaurants to the largest hotels, municipal facilities and even casinos.

The Canadian-designed technology, which is still exclusively manufactured in Canada, has grown popular across the North American continent and is also in use in the UK, the Middle East and Australia. A testament to ORCA’s growth since its inception in Toronto 10 years ago is the fact that today – among many other businesses – IKEA stores across Canada have installed the system. To build on that growth, three years ago the company decided to push into the Asia-Pacific region and chose Hong Kong as its headquarters.

Today, ORCA has established a solid base in the city and in Macao and is making inroads into the mainland market. It also has customers in South Korea, and the number of staff employed at their Asian headquarters in the Special Administrative Region (SAR) has doubled to six. The company believes the Greater Bay Area (GBA) initiative could be just the springboard it needs to further expand its reach into China and further afield.

While the early stages of the GBA initiative have focused on the huge infrastructure projects which will be required to bring about physical integration across the Pearl River Delta and cross-jurisdictional legal and regulatory issues, there can be no doubt that opportunities will flourish for companies like ORCA to handle the mountain of waste produced by a growing food and beverage sector as the region develops.

The GBA outline plan, unveiled by the Central Government in February 2019, aims to integrate a huge area of Southern China comprising a massive market of 70 million potential customers with a combined GDP of US$1.6 trillion. It includes nine major provincial cities in Guangdong province and the Hong Kong and Macao SARs and is part of Beijing’s global vision to create an inter-linked world through its wider Belt and Road Initiative, and establish long-lasting economic ties not only with its closest neighbours, but with the wider world.

Toronto native Anne Copeland, a Partner in ORCA Asia who is based in Hong Kong, said the decision to make the city ORCA’s Asian base was an easy one.

“We chose Hong Kong for a number of reasons. Obviously, its long track record as an international business centre and the ease of setting up here were factors, but also, it is a city – like many others – grappling with the problem of what to do with its waste. Landfills are filling up and the congested roads are causing an increasingly pressing pollution problem. And of course, the city is geographically very close to the GBA. Hong Kong was just the right fit,” said Copeland. Importantly, the initial and ongoing support of the Consulate General of Canada for Hong Kong and Macao has been invaluable. ORCA is an integral contributor at the annual Canadian Pavilion at the Eco Expo Asia in Hong Kong and the Consulate’s business partnering initiatives.

“There is also a very large and vibrant hospitality industry in Hong Kong with restaurants, bars and caterers of all shapes and sizes. We felt our simple to use, easy to install and maintain technology would not only fit the city’s F&B landscape, it might also help to alleviate some of the environmental problems the city faces with landfill site overuse and roadside pollution,” she added.

Copeland said clients who have installed the system – which consists of easily installed and operated units of four different sizes – baby, small, medium and large, depending on available space and amount of waste generated – include hotels, schools, private clubs, restaurants and in the case of Macao, the casino operator MGM. “We have incorporated our technology into international schools through a partnership with Sodexo, for example at the King George V School and the Hong Kong International School. It is also in operation in two IKEA stores with restaurants, New World Development’s Hong Kong Golf & Tennis Academy, and in many hotels, including Hotel ICON, Sino Group’s Hong Kong Gold Coast Hotel, the Island Shangri-La, Hong Kong and Swire Hotels, including EAST, Hong Kong and The Temple House in Chengdu. Sun Hung Kai Properties’ New Town Plaza shopping mall has installed it to enable different users and tenants to access this shared resource to further their sustainability performance. Furthermore, Sino Group’s subsidiary, Perfect Green Supplies Company Limited, operates an ORCA unit for its residents at Bowen's Lookout. ORCA is operating in other hotels in Hong Kong and the Philippines, and at Gate Gourmet Korea’s operations at the Incheon airport,” said Copeland. 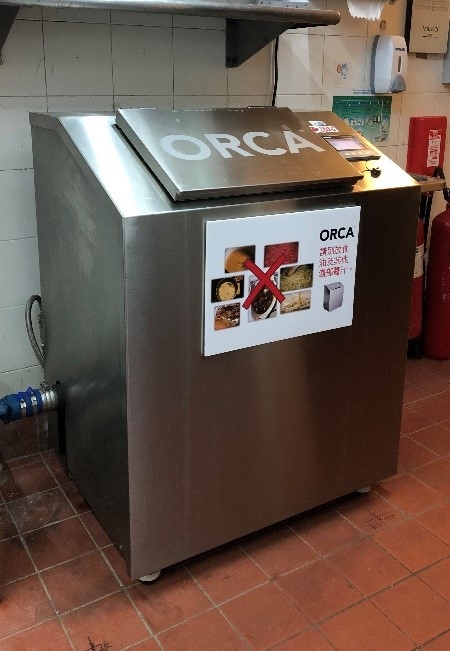 “In addition, we have been doing some early business development work in Southern China but clearly due to circumstances out of our control over the past year, things have slowed down a bit. However, we do have some clients who are taking the longer-term view of things and this can only bode well for the future,” she added.

In total so far, across Hong Kong, Macao and other locations in Asia, more than 30 food waste digester units are now in operation on either a buy-or-rent basis, the businesswoman said, with the smallest model available for a monthly rental rate as low as HK$6,500. ORCA also offers three larger versions which efficiently digest more food and take up a smaller space onsite than other types of food waste treatment options.

“This aerobic process produces effluent that can be safely discharged into the sewer system via a grease interceptor. Where sewage treatment plants generate energy from waste, as in Hong Kong, the effluent can be captured to generate renewable energy, offering a sustainable option for managing food waste,” Copeland added.

With the different sizes of the ORCA you can digest from seven to 45 kgs of food waste an hour, 24-hours a day. It works well in a variety of locations – from individual food service establishments, hotels and arenas, to a multi-user mall where food waste quantities can be tracked for each tenant. 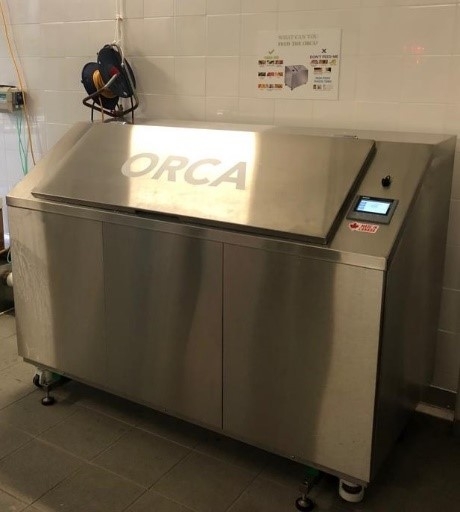 The system includes an on-board scale which measures the amount of food waste, helping food waste management and facilitating reporting. By analysing the data, businesses can gain insight to identify how to reduce wastage in the procurement, preparation and serving of food.

The businesswoman described the benefits of ORCA as environmental, operational and economical, adding that customers typically experience up to 50% savings on food waste disposal costs, as well as reduced odour and pest control bills and space savings as waste storage space is freed up.