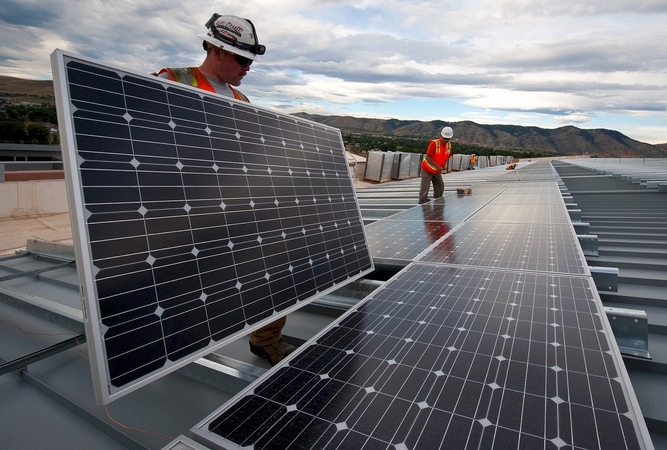 The development of China’s environmental industry has been slowed somewhat by the Covid-19 pandemic. National Bureau of Statistics data show that in 2020, investment in water conservation, environment and public-facilities management amounted to RMB8.75 trillion, an increase of 0.2% year-on-year. The green and energy conservation initiatives proposed in the 14th Five-Year Plan include energy-saving and emission reduction, environment governance, green and low-carbon transformation, circular economy and energy transition. Market consultancy Askci Corporation estimated the size of China’s environmental protection equipment market at RMB378.9 billion in 2020, and the figure is projected to reach RMB390.5 billion this year.

China’s environmental-protection sector encompasses equipment manufacturing, engineering and services in a wide range of technology areas. It includes the provision of equipment and services for environmental pollution control and monitoring, the removal of pollutants, waste treatment, and energy conservation; the provision of technology and equipment for clean production; and the collection, safe disposal, recycling and recovery of waste resources. It also covers services related to the protection of resources and the natural ecology. The sector can be broadly divided into the following areas:

In July 2020, China launched an implementation plan on the sorting of municipal solid waste and remedying the shortcomings in processing facilities. The plan envisages that by 2023, cities at prefecture level or above will be able to sort waste effectively and their waste-incineration capacity will be substantially raised. Meanwhile, the transport system for domestic waste in rural and township communities will also be improved. Askci projects that, by 2021, solid waste in China could reach 2.11 billion tons. According to official estimates, of the solid waste generated in China every year, agriculture accounts for about 47%, industry about 30% and construction about 18%.

The China Environmental Labelling Programme is a voluntary product certification scheme administered by the MEE. Products carrying this label comply with specific environmental requirements regarding their design, production, usage, handling and disposal, and have environmental advantages over similar products such as low toxicity, low hazard and resource conservation. With green consumerism on the rise, certified products are increasingly in demand, prompting more manufacturers to apply for environmental labels for their products.

By the first half of 2021, the total number of pollution control and green low-carbon projects in the PPP management database of the Ministry of Finance had reached 5,887, accounting for investment of some RMB5.7 trillion.

Studies by the China Association of Environmental Protection Industry (CAEPI) show that in China’s environmental industry, about 90% of enterprises are in the fields of prevention and control of water and air pollution and treatment and utilisation of solid waste resources. During the 14th Five-Year Plan period, it is expected that some enterprises will, through expansion or acquisition, extend their industry chain and broaden their business scope to become integrated environmental services providers while using smart technologies to lower costs and improve service quality.

A study of the sector released by Forward Industry Research Institute indicates that the smaller the revenue of an enterprise, the higher the share of revenue from environmental protection business as a percentage of total revenue, and the higher its professionalism in environmental protection. Statistics from the China Environmental Protection Association reveal that 91.6% of the enterprises are engaged in four business areas: environment monitoring, water pollution prevention and control, solid waste disposal and utilisation as a resource, as well as air pollution prevention and control.

In view of the policies under the 14th Five-Year Plan, many traditional landscaping enterprises are seeking a breakthrough by switching to engaging in ecology restoration. Major ecological environment restoration projects generally involve the restoration of diverse scenic areas and have higher requirements for professionalism. This means that the enterprises concerned must be able to carry out specific system planning and provide integrated ecological restoration solutions.

As rural domestic waste is transferred gradually into the system for the collection, transportation and treatment of urban domestic waste, the quantity of domestic waste in urban areas is increasing exponentially, to the extent that existing collection and transportation facilities can no longer meet the demand. Just 50% of the cities in China are equipped with waste incineration facilities. Meanwhile, enterprises engaging in the recycling of domestic waste are still small-scaled, decentralised and unorganised. Moreover, their level of recycling is low – the rate of re-utilisation of resources is a mere 50%.

A development plan for sorting and disposal facilities for urban domestic waste during the 14th Five-Year Plan period issued by the National Development and Reform Commission (NDRC) in May 2021 has set specific targets to be achieved by the end of 2025. First, the utilisation rate of urban domestic waste resources should reach approximately 60% nationwide. Second, the capacity for the collection and transportation of domestic waste nationwide should reach 700,000 tons a day and the relevant sorting procedures should be completed. Third, the capacity for the incineration of domestic waste for urban areas across the country should reach 800,000 tons a day, with the corresponding capacity for cities accounting for 65% of the total. From this, it is apparent that waste sorting in China is still at a starting stage, and there are huge business opportunities to be had by the solid waste disposal industry.

According to a report by China National Resources Recycling Association, in 2019 there were about 100,000 renewable resources recycling enterprises in China that together provided work for about 15 million people. In the year, the total value of recycling for the whole country was about RMB900.38 billion, up 3.7% year-on-year. There are currently some 159,600 recycling outlets, 1,837 sorting centres, 266 terminal markets and 63 sorting cluster areas nationwide. With a recycling network taking shape, the use of hotline platforms, internet and mobile apps is making the network all the better.

Recycling enterprises in China are typically small-scale technology laggards heavily reliant on manual labour. As a result, recycling costs are high, making it more difficult for these small enterprises to make a breakthrough in their development. Because the entry barrier is low and regulation is wanting, the majority of small businesses in the industry are adopting guerrilla hit-and-run tactics in running their business. This can easily cause environmental pollution problems and also make government supervision difficult.

Under the Law on Preventing and Controlling Soil Pollution, which came into effect on 1 January 2019, soil restoration works initially came under the guidance of the government while a top-down approach to soil control and restoration was adopted. The Measures for the Administration of the Funds for the Prevention and Control of Soil Pollution (Chinese version only), which is meant for implementation in the 14th Five-Year Plan period, has established a system for regulating funds used for the prevention and control of soil pollution and has set up such funds at the central government and provincial levels. This may be able to make a change to the current competitive situation.

Multinational companies have also been actively targeting the Chinese market through exports of their products, technology transfer and the establishment of joint ventures with local businesses. The majority of the processing equipment used in China is imported from overseas. One example of overseas involvement in China’s environmental industry is the partnership between France’s Suez Group and NWS Holdings of China, to provide services in hazardous waste incineration and waste-water treatment. Another example is the Veolia Group of France, which has established an office in China to offer environmental services. China is one of the key markets of the ALBA Group of Germany, which is engaged in the recycling and reutilisation of scrap cars and scrap metals, the third generation of domestic waste disposal technology and the disposal of kitchen waste and electronic waste, etc. The US environmental protection sector is also offering a wide range of preferential policies to promote the export of their technologies as a way to boost market share.

The environmental market in China is still in its development stage. Related exhibitions and expositions serve as business platforms for industry players to learn from one another, share experiences and explore business opportunities. The following are some of the upcoming exhibitions due to be held in major mainland cities:

Since the implementation of Supplement II to the Mainland and Hong Kong Closer Economic Partnership Arrangement (CEPA) in January 2006, all products of Hong Kong origin, including those related to environmental protection, can be imported into the mainland with zero tariffs. Hong Kong service providers can also set up wholly-owned enterprises on the mainland under CEPA to provide architectural design and engineering services, including environmental system engineering services. When Hong Kong service providers apply to set up construction engineering design enterprises in China, their track record in Hong Kong and on the mainland can be used by the authorities as the basis for assessing their application.

Also, under Supplement IV to CEPA, Hong Kong service providers may set up wholly-owned enterprises on the mainland to provide the following environmental services (not including environment quality monitoring and pollution source inspection):

Under the Agreement Between the Mainland and Hong Kong on Achieving Basic Liberalisation of Trade in Services in Guangdong, Hong Kong service providers offering the environmental protection services mentioned in the list above in Guangdong are entitled to national treatment, while the Agreement on Trade in Services under CEPA signed on 27 November 2015 allows Hong Kong service providers to enjoy national treatment when providing the same services across the mainland.

The State Administration for Market Regulation and the Ministry of Industry and Information Technology have jointly issued the Implementation Arrangements for the Conformity Assessment System for the Restriction of Hazardous Substances in Electrical Appliances and Electronic Products. This aims to curb the environmental damage caused by discarded electrical and electronic products. The new policy obliges suppliers of any electrical appliances and electronic products that were manufactured/imported after 1 November 2019 and are listed in The Standard Achieving Management Catalogue, to complete a conformity assessment on either a voluntary certification or self-declaration basis.

The MEE has established various national environmental standards and related technical requirements, and amended existing ones in response to changes in actual situations. These industrial standards are directly related to the environmental industry and several of its related businesses, and include:

Detailed information on these standards and technical requirements is available from the MEE website.

Since 11 July 2017, all mainland sewage and refuse treatment projects involving the government have been run under the PPP model. The government authorities and non-government investing parties concerned will enter into a PPP agreement in which equity distribution and risk-sharing mechanisms are clearly set out and the commercial risks of the project will be isolated by the setting up of a PPP project company with independent legal entity status.

In a bid to totally ban the entry of foreign refuse, advance the reform of the administration system for solid waste importation and promote the non-hazardous utilisation of domestic solid waste as a form of resources, the State Council launched the Implementing Program for Prohibiting the Entry of Foreign Refuse to Promote the Reform of the Solid Waste Import Management System on 1 April 2021. For details, please refer to MEE notice (in Chinese only).