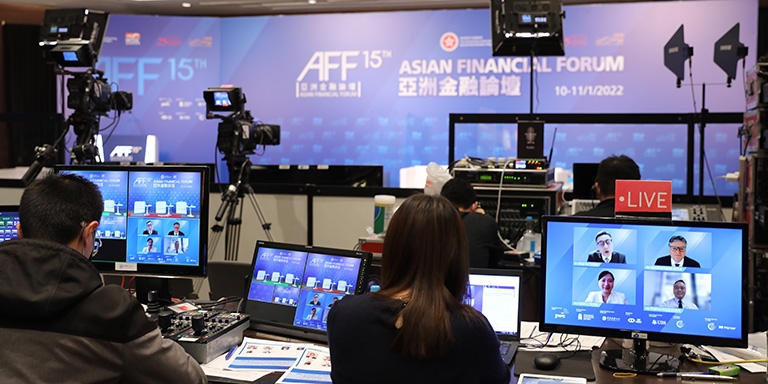 The Greater Bay Area lies at the heart of the world’s sustainable-development hotspot and Hong Kong has a key role to play.

The fast-growing and densely populated Asian region is home to half the world’s population and the source of 50% of greenhouse gas emissions, making centrally located Hong Kong a natural base for efforts to counter global warming.

At the same time, many emerging markets in Asia have yet to achieve or enjoy wealth in line with developed economies, giving the continent the double challenge of expanding economies and improving the living standards of its citizens while simultaneously reducing carbon dioxide emissions.

Jonathan Drew, Managing Director, ESG Solutions in the Global Banking division of HSBC, pointed this out during a panel discussion titled “Sustainable Development in the Greater Bay Area: Opportunities for Hong Kong” at the Asian Financial Forum earlier this month. He explained why the global bank had chosen to base its worldwide environmental, social and governance (ESG) efforts in the city. “Hong Kong has role in providing finance in the GBA and Asia generally,” he said.

As of 2020, assets being managed under sustainable development strategies amounted to a staggering US$35.3 trillion, a 15% increase from two years previously and accounting for more than one third of global assets.

He said more than 130 countries and regions had committed to cut carbon dioxide output. Mainland China had committed to reach peak output by 2030 and achieve net zero by 2060. The Guangdong-Hong Kong-Macao Greater Bay Area (GBA) was looking towards becoming a comprehensive green and sustainable development site requiting Rmb2.2 trillion (US$347 billion) in Guangdong. This has prompted Hong Kong to consider its role in this context.

As China's international financial centre with extensive links to the world, Hong Kong has a natural connector role to play. The city can serve sustainable investments on both sides. To capture long-term opportunities, Hong Kong can look at carbon markets, which will soon reach US$50 billion globally. The European Union is a leader in this space, while the United States and Mainland China are increasingly active. As the world transitions towards net zero, demand for capital will increase, Mr Li pointed out.

Panel moderator Dr King Au, Executive Director of the Financial Services Development Council, pointed out that China’s 14th Five Year Plan named Hong Kong as a green financial centre and set 2060 as its net-zero carbon goal, which means the country might need as much as US$15 trillion in green project investment over the next 30 years. An estimated 75% of this funding will need to come from the private sector, Dr Au said.

The Hong Kong government has been responding to the challenges, and since the establishment of green bonds the instrument had gone from strength to strength in the city, turning Hong Kong into a green bond hub. ESG bonds make up 21% of bond offerings, the highest proportion in Asia-Pacific. The government plans to issue US$20 billion in green bonds within the next five years and introduce retail green bonds later this year.

Posing a question to Thomas Pang, Partner in smart-city solutions provider Venturous Group, Dr Au first explained that Hong Kong government began looking at sustainability as early as 2003, establishing the Council for Sustainable Development along with the Sustainable Development Fund. In May 2020 the government also established a green and sustainable finance cross-agency steering group with the Hong Kong Monetary Authority and Securities and Futures Commission as co-chairs and including such bodies as the Mandatory Provident Fund Authority. Smart cities are also regarded as a solution – so how, Dr Au asked, would Venturous Group contribute?

Mr Pang said sustainable city technologies are probably the best for addressing sustainability problems. Rapid urbanisation and climate change challenges have become the main concerns of governments, which are the most important players in sustainability issues.

The mainland is now most important economy for smart-city development, he said. Three converging factors led to this. The mainland’s rapid technology development, and the fact that almost all citizens eschew cash; the mainland is rapidly urbanising, probably at the fastest pace in world; and there is also a growing middle class and younger generation. Mr Pang said since 2004, about 800 smart-city projects had been announced with most of these having a data collection bureau.

Mr Drew said Hong Kong could establish carbon markets through a localised carbon dividend scheme, taxing at one point and redistributing as a per capita dividend – this, he explained, would be the simplest approach.

Another alternative is cap and trade – compliance markets where the right to emit is allocated and becomes transferable. The mainland’s power sector has a national market in this, covering 40% of emissions. The baselining concept is critical and tough, with emitters needing to compensate if they deviate from the baseline.

He said in order to really cut emissions a twin approach was needed – decarbonising emissions and also demonstrating support for low-carbon alternatives. He added that offsets through trading may not be appropriate.

Ms Li said Mercer expected this area to develop but the company did not have a complete platform yet.