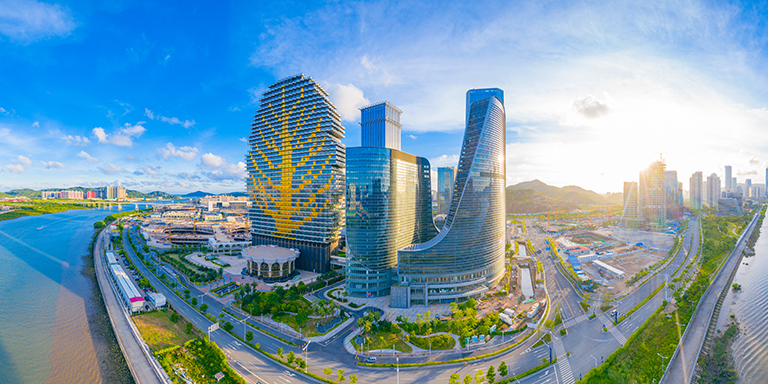 Many businesses operating in the GBA expect the new economic strategy to expand their returns.

The quarterly Greater Bay Area Business Confidence Index (GBAI) survey, carried out by Standard Chartered and the Hong Kong Trade Development Council (HKDTC), asked businesses operating in the Guangdong-Hong Kong-Macao GBA how they planned to adapt to the new strategy.

Manufacturers and financial services firms were most upbeat on the strategy, expecting their businesses to benefit from the change.

The survey asked respondents whether they had plans to roll out products and-or services targeting the mainland market as the economy transitions to a more domestic consumption-driven model, Kelvin Lau, Senior Economist, Greater China at Standard Chartered said. “Almost 40% of respondents said yes, marginally exceeding those saying no (39%), with the remaining 21% needing more time to decide,” he said.

“Manufacturing and trading” and “financial services” had the highest share of positive responses; by city, Foshan topped the list with 67% yes responses, and Huizhou and Dongguan rounded out the top three. More generally, larger companies (by annual turnover) tended to report a higher percentage of those planning to tap the mainland domestic market.

Respondents expected to sell more onshore but appeared less to source more domestically with just 4% saying they would substantially increase sourcing from mainland companies, and 15% saying they would increase slightly. Most said there would be no change to their sourcing strategy, and a further 19% said they need time to decide. “Manufacturing and trading” again posted the most positive results among industries.

“This makes sense, given the mainland’s traditional strength in the manufacturing supply chain,” Mr Lau said.

The “dual circulation” development strategy could lead 20% of respondents to increase their investment in the mainland, while 58% anticipated no change and almost 20% saying they “need time to decide”. By industry, “financial services” had the most positive responses (27%), followed by “manufacturing and trading” (22%).

Expectations of the impact of “dual circulation” on profits in the short to mid-term (the next five years) were positive as 24% anticipated a rise, while just 5% saw a negative effect; the remaining 52% saw no impact and a further 18% said they needed more time to tell, Mr Lau said.

Respondents said the employment market in the region remained hot, as more than 20% of applicable firms reported difficulty in recruiting executives/managers, marketing/sales, and engineers/technicians; this was closely followed by research & development personnel and general workers, both in the 19% range. Clerks and other professionals were less difficult to hire, at 12% and 15%, respectively. Hiring problems had varying impact across job types, with the highest share of applicable respondents saying the shortage of executives/ managers (15.9%), marketing/sales (15.1%), and R&D personnel (15.1%) had the most impact on their business.

The new development plan at Qianhai in Shenzhen, just north of Hong Kong, is aimed at accelerating integration and collaboration between the two GBA cities. Under the new development plan the zone will be eight times bigger, providing a broader economic base to build on cross-border technology innovation, financial opening and services trade expansion (in household wealth, advance manufacturing or transport infrastructure, for instance). The new plan for Hengqin (main picture) in Zhuhai, adjacent to Macao, should accelerate Macao’s industry diversification and integration with Zhuhai and other GBA cities, mainly through Macao’s more direct participation in Hengqin’s policy-making and execution. These two new development plans were announced in September, and the latest GBAI survey captured respondents’ initial thoughts on them. Many were optimistic on opportunities the zones present.

Of the respondents, 19% saw the Qianhai and Hengqin plans as having at least some positive effect on their businesses in the short to mid-term (within five years), versus just less than 2% seeing a negative impact. A further 17% said they needed time to judge, but a majority (62%) thought the plans would have a neutral or no impact. Foshan, Huizhou and Dongguan had the highest share of positive responses (29%, 26% 23%, respectively), followed by the core cities (Hong Kong 19%, Shenzhen 18%, Guangzhou 16%). By industry, “financial services” topped the ranks with 24%, with “manufacturing and trading” (20%) and “innovation and technology” (19%) rounding out the top three spots.

Mr Lau said the GBAI, based on quarterly surveys of more than 1,000 companies operating in the GBA and conducted in collaboration with the HKTDC, showed businesses emerging from a challenging third quarter of 2021 reported weaker confidence towards the outlook. The GBAI’s “current performance” index for business activity in the fourth quarter of last year fell for a second consecutive quarter to 50.3 from 52.7 in the third quarter. It would have dipped below the 50 neutral mark if not for decent “new orders”, which continued to grow and companies’ ability to raise final prices.

“In addition to most sub-indices’ expectations component remaining comfortably in expansionary territory, we think the authorities’ recent shift to a more pro-growth policy bias (the latest actions are not captured in the fourth quarter survey) should support sentiment in the first quarter of this year,” Mr Lau said. “Our credit indicators suggest that GBA credit conditions tightened evidently in Q3, and as such, any loosening of monetary conditions would be welcomed.”

By city, Foshan and Hong Kong improved on a quarter-on-quarter basis, while others dipped below 50 for “current performance”.

Growth is unlikely to rebound swiftly, Mr Lau said, but appears to be stabilising after a challenging third quarter.

“Demand for exports is likely to stay strong and power-rationing measures have been largely halted; that said, headwinds from slowing real-estate activity and disruptions from COVID-19 resurgences still call for more policy support to limit further downside risks to growth.

“The latest example of the authorities making growth a higher priority is the broad-based 50 basis point cut in the reserve requirement ratio (RRR), effective 15 December. According to the People’s Bank of China, the move unlocked 1.2 trillion renminbi [US$189 billion] of long-term funding and should lower banks’ funding costs by Rmb15 billion annually. This was followed by a 25 basis-point cut in re-lending rates to small and medium-sized enterprises and agriculture loans. Judging by the recent tightening in GBA credit conditions suggested by our credit indices, our survey respondents would welcome the confirmation of a policy shift to easing growth headwinds.”