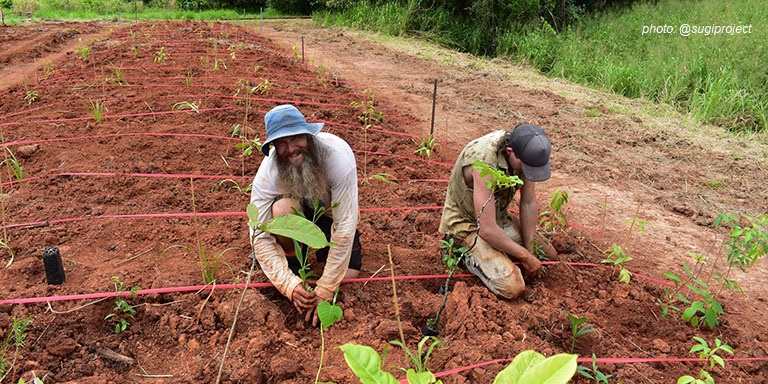 Entrepreneurs in Hong Kong can join a thriving innovation ecosystem by plugging into the worldwide UpLink network.

As the COVID-19 pandemic has moved health to the top of everyone’s agenda, sustainable development — which is conducive to a healthy environment — is gaining traction.

The United Nations has put forward 17 Sustainable Development Goals (SDGs). The leader of a start-up incubator which helps entrepreneurs work towards these goals believes start-ups of all varieties should put SDGs front-and-centre as their primary aims.

Challenges on UpLink range from the Trillion Trees: Amazon Bioeconomy Challenge – to protect and restore biodiversity in the massive South American rainforest – to Clean Air for all – tackling air pollution.

Mr Kwok said the project gave Hong Kong entrepreneurs an opportunity to become eco-unicorns. “You are not just worth US$1 billion, but have the opportunity to enrich a billion lives.”

UpLink, which launched last year, was WEF’s first open-to-all project, he said. Even high-school students can join, and anyone can make their voice heard and submit a solution. The WEF established the UpLink platform in 2020. Mr Kwok is an UpLink innovator.

The WEF is an international organization for public-private cooperation established in 1971. The Forum engages “political, business, cultural and other leaders of society to shape global, regional and industry agendas”.

UpLink also has action groups that offer thought leaders and activists curated platforms to discuss roadblocks to achieving SDGs and link up with like-minded people worldwide. Hong Kong has a thriving start-up ecosystem and many entrepreneurs are interested in attaining SDG goals. Networking and technology sharing comprise the life-blood of start-up hubs such as Hong Kong. In the same way, working with a global hub of hubs UpLink opens the entire world to the city’s entrepreneurs.

Stephen Liang, Assistant Executive Director at the HKTDC, said the HKTDC is eager to form links between the start-up ecosystem in Hong Kong with overseas and international ecosystems such as UpLink.

To give first-hand examples of how start-ups can achieve sustainability goals, Elise van Middelem addressed the webinar from Switzerland where she runs SUGi, the activation hub for the Rewilding Generation which she founded. SUGi aims to boost biodiversity and enrich people’s lives by restoring natural forests in urban areas. One project in Gurrbum, south of Cairns in Australia’s Queensland, was established to give the endangered southern cassowary a corridor between stretches of forest habitat.

The webinar also heard from a high-technology start-up established by Ziga Drev, Founder & Managing Director at Trace Labs which uses blockchain technology to ensure that all supply-chain materials and services that went into a product were sustainably and ethically sourced. Both SUGi and Trace Labs are UpLink Innovators.

Both speakers said joining the UpLink community backed by WEF gave them tremendous visibility to the global market and partners who shared similar visions on sustainable development goals. Being UpLink Innovators gives them a platform to raise capital through crowdsourcing, access to data they needed to gather for their business and expand their global footprints.

Ms van Middelem said the SUGi rewilding initiative boosted biodiversity, educated communities and restored the environment by involving the entire community in planting dense forests in previously derelict areas. There are more than 90 SUGi projects on every inhabited continent, including one in the New Territories of Hong Kong. The projects have planted 95,000 native trees (at a density of three per square metre) and restored more than three hectares of land so far.

SUGi uses a rewilding technique pioneered by Japanese botanist Akira Miyawaki who planted a wide range of native plants, packed extremely density, to create forests, sometimes in small plots. Mr Miyawaki planted more than 40 million native trees, she said. His technique is based on resilience, bringing back the ancient forests.

Ms van Middelem initially worked in luxury marketing. “But I was overwhelmed by the scale of the ecological problems,” she said. “I wanted to do something positively impactful.” She looked at many tree-planting schemes. “But many were monoculture schemes which were not restorative. Also none of them seemed to offer the opportunity to track and follow my investment.” That is why she founded SUGi which lets investors stay in touch with what they do.

The first project was on a landfill site within Beirut, Lebanon.

“We believe sustainable supply chain networks are only possible by allowing people and organisations to benefit from trusted knowledge exchange,” he said.

Indicating the scale of the problem, he quoted a 2017 report in the United Kingdom saying 32% of manufacturers could not guarantee the ingredients they used were not fraudulent.

Origin Trail works with the Supplier Compliance Audit Network (SCAN) in the United States which includes 55 members that represent the largest American importers, with US$1.5 trillion in annual purchasing power and accounting for 40% of imports into the US.

They developed a solution for a retailer which in turn brought them the business of WalMart China. This encouraged them to set up in Hong Kong where they have established a company developing traceability solutions.

“We need to make sure that, as products flow, so does data, moving through different parts of the supply chains,” Mr Drev said. “Global supply chains can be disrupted if the flow of data is interrupted.” He said the recent blockage of the Suez Canal by a container ship was caused by a lack of interoperability between two supply chain systems.

Data was moving into silos and out of general view, he pointed out, and supply chains were not, in fact chains, but really complex networks. But reliable data flow depended on inclusivity and interoperability making transparent, visible to all, data vital.

Trace Labs launched the Origin Trail open-source blockchain protocol in 2018, when it also linked up with the British Standards Institution which establishes standards for supply chain data.

Giving an example of how the system worked in practice for consumers, he said a shopper in a supermarket simply had to scan the code on a pack of chicken to obtain full details on the product’s origins. This lets consumers confirm the sustainability of the product. “Some research suggests that as many as eight out of 10 consumers check on such details,” he said.

Since Origin Trail uses public, decentralised data without a hub database, the solution can be easily scaled and used by a wide range of supply chain tracking and reporting systems, according to Mr Drev.