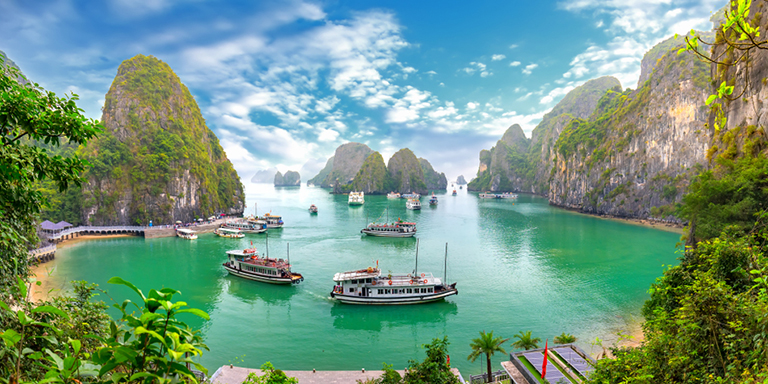 Globally acknowledged for its success in containing COVID-19, the Southeast Asian country is also one of the few to maintain economic expansion.

In terms of how countries have managed the Covid-19 pandemic, Vietnam has undoubtedly been among the most successful. As of 22 February, it had only officially recorded some 2,383 cases, with just 35 deaths attributed to the virus. This is seen as a remarkable achievement for a nation that is home to more than 96 million people.

More impressive still, despite having pretty much closed its borders to all non‑citizens since March 2020, the country still recorded year‑on‑year gross domestic product expansion of 2.91%. This made it one of the very few countries to maintain positive growth last year, although it was, admittedly, notably well below the 7.02% figure recorded for 2019. Looking to the future, the government is now hopeful of securing 6.5% growth overall for the current year.

This success aside, its management of the outbreak was not without its moments of drama, with two spikes in particular having a hugely negative impact on peak domestic travel periods. The first occurred in the coastal city of Danang, a popular vacation spot, in July last year, with the second coming in late January this year, immediately prior to the Tet Lunar New Year holiday, resulting in nationwide movement restrictions. In light of this, it is even more remarkable that VietJet, the nation’s largest low‑cost carrier, reported a 70 billion Vietnamese dong (US$3.04 million) post‑tax profit for 2020, having carried more than 15 million passengers. Bamboo Airways, another local leisure airline, also announced a full‑year profit, after handling more than four million passengers.

Despite the country’s borders being closed to foreign travellers, strong domestic demand for travel and preferential government policies for the aviation sector delivered impressive results for private carriers. Unlike other Southeast Asian countries such as Thailand and Singapore, however, Vietnam has given few indications that it plans to open its borders any time soon.

At present, general travel is still forbidden, while a strictly managed 14‑day quarantine period is obligatory for any overseas experts or investors entering the country, with the same restrictions applying to returning Vietnamese passport holders. Of late, it has also been rumoured that any international arrivals will also need to have secured extensive medical insurance prior to being admitted. Overall, though, as of the current time, strict admission restrictions remain in place with no real suggestion they are likely to be lifted in the immediate future.

Its intransigence may well be down to the fact that Vietnam is seen as less reliant on revenue from international tourism than many of its Southeast Asian peers. With its current containment measures still delivering economic growth despite the borders remaining closed, it is thought the authorities are unlikely to risk compromising this by opening up to the wider world while the external threat level remains high. In addition, once travel is again permitted, it is thought it will be in the form of a gradually phased in Green Lane process, which will see admission granted only to travellers arriving from countries with comparably low infection levels.

Perhaps given its success in containing the outbreak to date, Vietnam has made less haste to initiate a domestic vaccination programme than a number of other jurisdictions. Indeed, to date – and despite having apparently secured some 60 million doses of the vaccine – its inoculation plans have yet to be announced.

As well as the international vaccines secured – including 30 million arranged under the terms of the World Health Organization‑led COVAX scheme – Vietnam has also invested in its own treatment programme, with four domestic institutions said to be developing vaccines. These include Nanocovax (developed by the Vietnam Military Medical University), which has completed phase one of its clinical trials, and Coviva (developed by the Institute of Vaccines and Medical Biologicals), which is expected to begin clinical tests imminently.

In part, Vietnam’s relatively strong economic performance over the past 12 months has been driven by its success in closing export‑related trade deals, boosting foreign direct investment and rolling out a nationwide infrastructure‑development programme. It managed to sign free trade deals with the European Union and the United Kingdom, even with the outbreak preoccupying both respective governments, while also establishing itself as a founding member of the Comprehensive and Progressive Agreement for Trans-Pacific Partnership.

It topped all of this off in November last year when, alongside nine other Southeast Asian nations as well as Mainland China, Japan, Korea, Australia and New Zealand, it signed the Regional Comprehensive Economic Partnership agreement, one of the largest free‑trade deals in history.