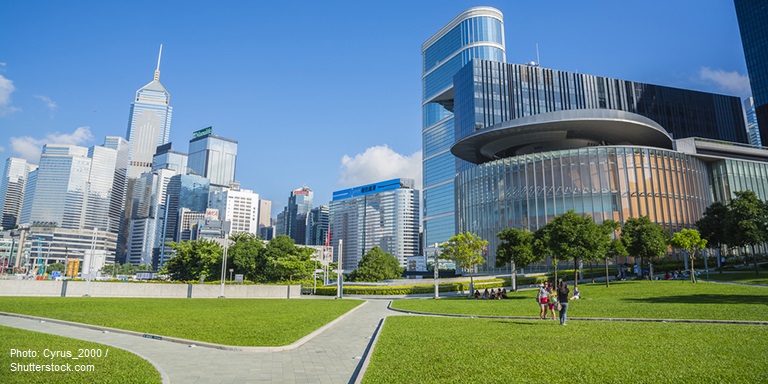 “Hong Kong SMEs are facing many challenges in the face of COVID-19, which has cast a shadow on global economic growth and has led to a ‘new normal’ in international trade and commerce,” said Dr Lam.

“We welcome the economic support measures in the Policy Address that can help Hong Kong businesses overcome these challenges.

“For Hong Kong SMEs facing cash-flow issues, cancelling the double stamp duty for non-residential property will provide them with more flexibility in their finances. At the same time, broadening the coverage of the Export and Marketing Fund will help SMEs find new market opportunities online and offline.

“Working closely with the HKSAR Government, we will assist Hong Kong SMEs to enter the Mainland Chinese market through the Guangdong-Hong Kong-Macao Greater Bay Area (GBA), while helping them to transform through digitisation and to find new global opportunities through different O2O [online-to-offline] promotional platforms.

“For the convention and exhibition industry, which is hard-hit by the pandemic, the Government’s decision to proceed with expansion plans for exhibition space in Wan Chai and at the airport will help sustain the industry’s development, and in the long run reinforce Hong Kong’s position as an international events capital.

“I and the team at HKTDC will redouble our efforts to help Hong Kong companies get through these difficult times and capture new opportunities ahead,” Dr Lam added.

During her Policy Address, Hong Kong Special Administrative Region Chief Executive Carrie Lam said: “To facilitate small and medium enterprises (SMEs) to apply for relevant funding from various government support schemes in a quicker and easier way, we have formed the ‘SME ReachOut’ service team to provide one-stop consultation and referral services. We plan to expand the scope of the SME Export Marketing Fund for two years to cover large-scale exhibitions organised by organisers with proven track record targeting the local market, as well as virtual exhibitions organised by the HKTDC and reputable exhibition organisers with good track record. The eligibility criteria will also be relaxed to cover non-SMEs.”

The Government will take forward the redevelopment of the three government towers in Wan Chai North and the Kong Wan Fire Station into convention and exhibition facilities, hotels and offices, and press ahead with the development of phase two of AsiaWorld-Expo, she said. The Government would also use the HK$1 billion (US$129 million) Convention and Exhibition Industry Subsidy Scheme to subsidise exhibitors of exhibitions organised by the HKTDC and participants of its major conventions.

“These two projects in total will increase [convention and exhibition] space by more than 40%. As for the proposal to develop a new convention centre on the site above the Exhibition Station of the Sha Tin to Central Link, in view of the technical difficulties involved, the uncertainties concerning the construction period and concerns about cost-effectiveness, we have decided to use the site for other purposes,” Mrs Lam said.

The Chief Executive said the Government regarded Mainland China as the city’s hinterland.

“Since the inclusion of the Dedicated Chapter on Hong Kong and Macao in the outline of the National 12th Five-Year Plan, the Central Government has fully positioned Hong Kong’s role in planning and taking forward the country’s overall development. Furthermore, the Belt and Road (B&R) Initiative and the GBA development in recent years have provided unlimited opportunities for Hong Kong,” she said.

“While the US and European economies are falling into deep recession, our country has already regained economic growth momentum by vigorously suppressing and strictly controlling the epidemic. There is no reason for us not to take advantage of this development when we seek to inject impetus to relaunch our economy.”

“The fifth plenary session of the 19th Central Committee of the Communist Party of China has recently adopted the Proposals for Formulating the 14th Five-Year Plan for National Economic and Social Development and the Long-Range Objectives through the Year 2035, stating that reform and innovation will be the fundamental driving forces to accelerate the establishment of a new development pattern featuring ‘dual circulation’, which takes the domestic market as the mainstay while enabling domestic and foreign markets to interact positively with each other,” she said.

“While the main element of the “dual circulation” strategy is to expand domestic demand, it does not mean our country is closing the door to the outside world. Instead, the mainland’s economy will open up in a wider scope, a broader spectrum and at a deeper level, so as to make better use of international circulation to enhance domestic circulation.”

The Government will also launch a five-year Global STEM Professorship Scheme at a cost of HK$2 billion to attract outstanding research & Development talent from overseas to engage in R&D work in Hong Kong, and will release the Smart City Blueprint for Hong Kong 2.0 in December this year with more than 130 smart-city initiatives.

The Government will also launch the Fintech Proof-of-Concept Subsidy Scheme to encourage traditional financial institutions to partner with start-ups to conduct Proof-of-Concept projects and conduct a public consultation on establishing a licensing regime to monitor virtual asset service providers.

Mrs Lam said Hong Kong’s banking system remains robust with major banks’ average liquidity coverage ratio and average capital adequacy ratio exceeding 156% and 20% respectively, both well above the international regulatory standards. From end-2019 to the end of September this year, the total deposits of banks grew 7.3%. Other facets of the financial services sector such as the securities and insurance markets also continue to operate in an orderly manner. In these turbulent times of international and geopolitical tension, the Government and the financial regulators will continue to closely monitor financial market development to ensure financial stability. Cash is king in GBA