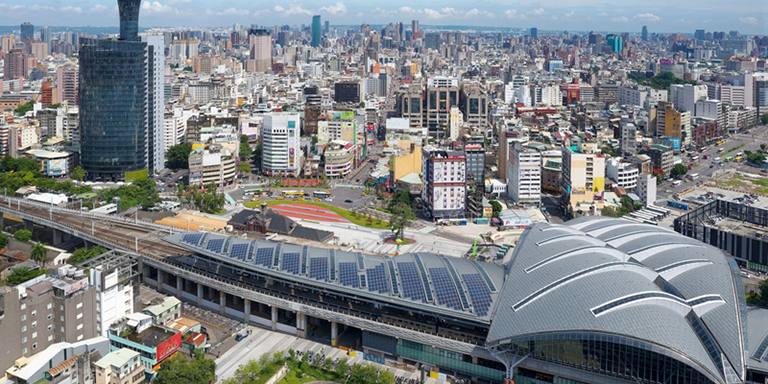 The island is close to achieving its aim of meeting the power needs of a new generation of domestically relocated and overseas-headquartered high-tech manufacturers.

Since 2016, as part of a bid to meet rising demand from local and overseas‑invested businesses, Taiwan has been actively looking to develop its renewable‑energy resources. This has seen it focus on nurturing its domestic solar‑photovoltaic and wind‑power sectors, with the stated aim of reducing its reliance on imported energy and creating a nuclear‑free society.

Over the past four years, the strategic planning undertaken by the territory’s economic and energy departments has been seen as having delivered positive results on both the solar and wind‑power fronts. This has been regarded as a priority given the likely future shortfall in energy supply as demand grows from the many domestic and international businesses stepping up their activities locally.

In order to facilitate its planned switch to green energy, Taiwan amended its Electricity Act in 2016 with a view to extending the installed capacity of its environmentally friendly power plants to 27 gigawatts by 2025. At that point, green power is expected to account for 20% of Taiwan’s total electricity output, up from just 4.1% in 2015.

According to figures from the Bureau of Energy, Taiwan’s renewable power generation capacity stood at 7.797GW as of the end of 2019, some 13.9% of its overall generation capacity. In all, local renewable power plants produced 15.36 billion kilowatt-hours of electricity in 2019, some 5.6% of the total generated. This is expected to rise dramatically as a number of new facilities come online.

This drive to boost local generational capacity has been given added urgency by the ongoing Sino-United States trade dispute. Since 2018, this has led to many Taiwan companies domestically relocating their production facilities from Mainland China. Already in full flow, this process only accelerated still further following the COVID-19 outbreak earlier this year.

The problem has only been exacerbated by the growing number of international manufacturers said to see Taiwan as an ideal investment destination. Among the most high‑profile of these is Idaho‑headquartered Micron, the world’s third‑largest dynamic random‑access memory (DRAM) producer, which announced plans to build two wafer foundries in the Central Taiwan Science Park in August 2019. A year later, meanwhile, Dutch semiconductor producer ASML unveiled its Global EUV (Extreme Ultraviolet) Training Center in the Southern Taiwan Science Park. Adding to this enhanced demand for energy access, several domestic tech giants – most notably Taiwan Semiconductor Manufacturing Company (TSMC), one of the world’s largest contract chipmakers – have also committed to opening additional local production facilities.

Most significantly, the arrival of additional multinationals has represented a particular challenge. With many such businesses having publicly committed to environmental protection and carbon reduction programmes, access to green power is a prerequisite when it comes to determining new locations. In order to meet such expectations, and to ensure inward investment flow is sustained, it has become incumbent on Taiwan to “green” its energy generation resources in as brief a period as is viable.

As the twin focuses of Taiwan’s renewable‑energy programme, it is understandable that solar‑photovoltaic and wind‑power generation resources have enjoyed the fastest growth within the wider green‑power sector. In the case of solar power, local installed capacity is expected to have risen to 6.5GW by the end of the year, a significant increase on the 2.8GW recorded for 2018. This will represent an annual power‑generation capacity of 4.6 billion kWh, enough to supply 1.32 million households. By 2025, it is anticipated that total installed solar photovoltaic capacity will top 20GW.

In order to deliver this growth, the Taiwanese authorities are encouraging both public and private‑sector bodies to participate in solar photovoltaic projects in three key ways. Firstly, the expansion of rooftop photovoltaic installations has been prioritised. In line with the territory’s Renewable Energy Development Act, major electricity users are now obliged to install a specific quota of such solar photovoltaic panels at their facilities.

Secondly, moves have been made to optimise the use of electricity through the co‑location of agriculture, fishery and livestock breeding operations whenever feasible. Finally, strengthening co‑operation between central and local government bodies has been prioritised, including the adoption of joint initiatives to transform some southern townships into solar energy development zones.

With regard to wind power, the focus has been on developing off‑shore resources. This is largely because, with the number of suitable sites somewhat limited, the onshore sector is already close to saturation point. Despite this, the total installed capacity of the territory’s onshore facilities is expected to reach 814 megawatts this year, up from 696MW in 2018, before rising to 1,200MW by 2025.

On the offshore front, the Taiwan Strait has long been considered a prime site for the development of wind farms. Backed by investment and technology from a number of the leading offshore wind‑power companies in Denmark, Germany and the United Kingdom, work on several major wind farms along the western coast of Taiwan has accelerated in recent years, with many now approaching the harvest stage.

Taiwan’s offshore wind‑power development plan essentially consists of three discrete stages. The initial stage, scheduled for 2019‑2020, has involved the construction of three clusters of demonstration wind farms. Of these, the installation managed by Taipei‑headquartered Swancor began commercial operations at the end of 2019, while the first phase of the facilities developed by government‑owned Taipower is expected to be connected to the grid by the end of this year.

Phase two, which is scheduled to be completed by 2024, will see 15 approved sites further developed, 11 by selected suppliers and four via a bidding process. In addition to such major local players as Taipower, China Steel Corporation and Swancor, two Danish companies – Ørsted and the Copenhagen Infrastructure Fund (CIP) – and Germany’s wpd are expected to participate in this second stage. Should everything go to plan, all the relevant wind farms will be connected to the grid within four years.

The third and final stage will focus on mass development and roll out from 2025. Assuming the government forecasts are borne out, the installed capacity of Taiwan’s offshore wind‑power facilities should have reached 520MW by the end of 2020 and rise to 5GW in the next five years.

In addition to helping Taiwan overcome its power shortfall issues, the accelerated growth of the offshore wind‑power sector is also expected to benefit local industries in a number of other ways. CIP, for example, has employed the services of more than 80 Taiwanese suppliers across a wide range of fields, including underwater foundation work, wind‑turbine manufacturing and marine engineering. This is widely regarded as a significant undertaking by the Copenhagen‑based firm and one that has been replicated by several other major overseas‑headquartered businesses.

It is hoped that such moves will bring technology transfer benefits to Taiwan and help boost its industrial localisation process. It is believed that this will ultimately help the territory make good on its ambition to be one of East Asia’s key offshore wind‑power production and R&D (research and development) hubs.