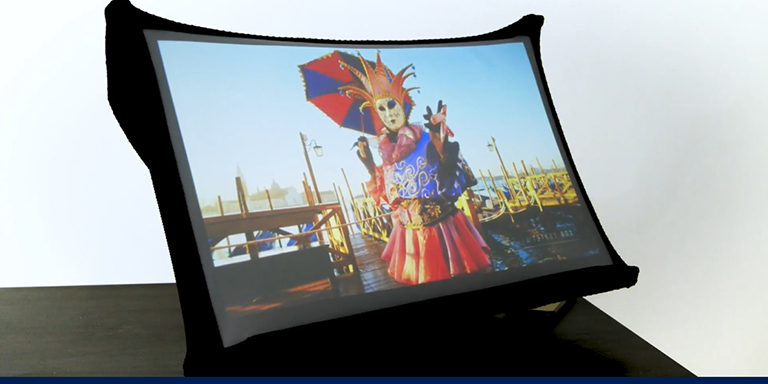 A big screen in a little package brings the advantage of large displays to users on the move.

Many people put books in their bags when going on journeys since they are useful as small, light packages of content. But in the digital era, readers and viewers need to have their content on big screens. Now, Hong Kong start-up Arovia is taking the traditional screen concept and focusing on developing light, thin, high-resolution, foldable, non-wrinkle screens with the compact lightness of a book – the Spontaneous Pop-up Display (SPUD). After successfully selling 2,000 first-generation units during a crowdfunding campaign, a branch was established in Hong Kong Science Park in 2019, with the founders hoping to achieve synergy in the Science Park to create a more complete second-generation SPUD.

Traditional projection technology uses a light source to project an image on to a white screen. But images on such screens can easily be washed out by ambient light and the big screens are not particularly portable. SPUD combines the projector and screen. It uses rear projection, beaming the image directly to the back of the screen through the High-Definition Multimedia Interface (HDMI) cable. The projection technology allows the image to be clearly displayed even at an ultra-short projection distance. Leonard Wong, Supply Chain Manager at Arovia, said SPUD users do not need to carry a large, heavy external screens, greatly improving the convenience.

Screen design is the core technology of SPUD, which is produced with a flexible material blended with nanomaterials that make it foldable, portable and suppress wrinkling. The technology has been patented in many countries, including European nations, the United States, Japan and India. The SPUD, which weighs about 1.5 kilograms, has a screen of 24 inches when unfolded; when stowed, it is the size of a book (17.8 centimetres wide, 7.6cm high and 25.4cm long).

"One of the main founders of SPUD, CEO Alexander Wesley, used to work in optical instruments and he needed to fly frequently. It is extremely important to use laptops for a mobile office but laptop screens are small. He had difficulty viewing design drawings and materials. This inspired him to design SPUD," Mr Wong recounted. His idea, together with the efforts of Mr Wong and the other Co-founder, Chief Technical Officer George Zhu, led to the first-generation SPUD. The founders successfully raised US$800,000 on the Internet in 2016 by selling the devices at $499 each. In just one month, 2,000 units were sold. Orders flowed in from all over the world, including the US, Europe, Japan, Australia, Southeast Asia, Africa and South America. Of the orders, 50 were from Hong Kong.

SPUD can act as the second screen of a computer. "In the US, dual screens are often used in offices, especially for work programmes that require multiple windows at the same time, such as checklists, design drawing and engineering drawings. When working away from the office, the size of a single desktop computer and laptop computer is small. The screen inevitably limits work to varying degrees. SPUD can make work more convenient," Mr Wong advised.

In the accounting or auditing industry, dual screens can improve the efficiency of reporting and audit work, while also being used to present results to a client.

SPUD can serve as a large display screen in In exhibitions or during presentations. When sales staff introduce products to customers, images can be outputted from mobile phones, tablets and laptops, enabling customers to comfortably watch the display on the large screen.

Second generation on the way

Arovia has discontinued the first generation of SPUD to focus on the second generation of research and development (R&D). Mr Wong said second-generation screens would be smaller and lighter, and have improved functions including increased definition and improved sound effects.

The firm aims to make 2,000 second-generation SPUDs. R&D and testing are in progress and the management believes the prototype can be completed within three months. Part of the R&D work was carried out at Arovia’s premises at the Hong Kong Science Park.

"The production line is in Mainland China but Hong Kong has certain geographical advantages in terms of connecting with international standards,” remarked Mr Wong. “Many scientific research or innovative technology companies are in the Hong Kong Science Park. We can explore adding innovations from other firms to the design of the second-generation SPUD, and the synergistic effect will enhance product development.”

Production issues mean the unit price of SPUD is not low but Mr Wong believes reductions are possible. The key lies in attracting sufficient investors to start mass production. Previously, Arovia raised funds through crowdfunding – production was determined by sales, and the production cost was much higher than that for mass production. For the second-generation product, the company aims to complete product prototypes by the end of this year and then actively seek funds, hoping to achieve mass production.