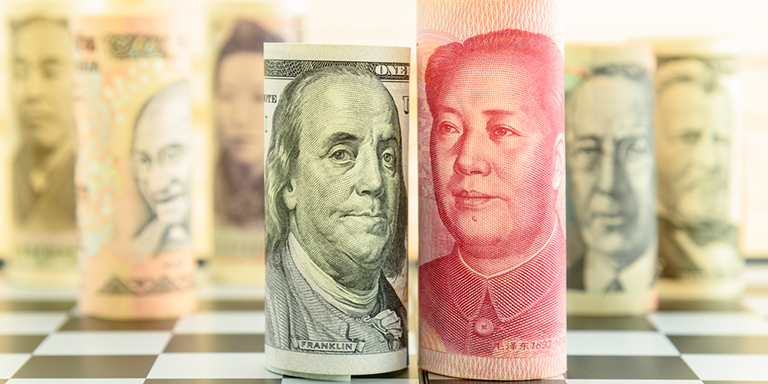 Businesses in China’s Guangdong-Hong Kong-Macao Greater Bay Area have turned bullish, seeing a positive outlook for exports and expecting a strong drive towards internationalisation of the renminbi.

The GBA Business Confidence Index (GBAI), based on quarterly surveys of over 1,000 companies operating in the Greater Bay Area, suggests an improvement in business confidence in the third quarter.

In the first update since Standard Chartered Bank and the Hong Kong Trade Development Council (HKTDC) jointly launched the GBAI in July, the GBAI’s “current performance” business activity index rose to 42.4 in the third quarter from 37.0 in the second quarter, reflecting easing contractionary pressure. A reading of below 50 indicates contraction, and above 50 expansion.

Even more encouraging is the larger jump in the corresponding “expectations” index, to 56.2 from 47.0 in the second quarter. “This reflects a swing back to expansionary territory in the fourth quarter, now that we have probably seen the steepest part of Mainland China’s V-shaped post-COVID recovery,” said Kelvin Lau, Senior Economist for Greater China at Standard Chartered Bank. He added the reading is consistent with the bank’s prediction that the mainland’s gross domestic product (GDP) growth will return to about 6.0%.

A detailed breakdown shows that business recovery is becoming more broad-based. Stronger production and sales helped lift profit expectations, while new export orders are improving alongside domestic ones. Retailers, who were more pessimistic in the third quarter, are expected to start catching up with manufacturers in fourth quarter. The sub-indices for non-core mainland Greater Bay Area cities were doing as well as Shenzhen and Guangzhou, the outperformers in the second quarter.

The latest GBAI credit indices indicate borrowing costs are likely to rise, Mr Lau said, confirming Standard Chartered’s view that the mainland’s monetary policy easing is nearing an end as the urgent need to support growth fades. The index compiler’s thematic questions showed 42% of respondents expected the overall pace of renminbi internationalisation to accelerate in the coming year, echoing recent signs of a stronger policy push, although just 23% of respondents planned to use renminbi more themselves. Trade-settlement redenomination is expected to lead this transformation.

In the April-June quarter, the inaugural GBAI readings suggested weak business activity in the second quarter but expectations indicated a better third quarter with the region set to recover from COVID-19 disruptions. The latest GBAI confirms that Greater Bay Area business activity has been on the mend, Mr Lau said. More importantly, the “expectations” index suggests further improvement in the fourth quarter as all sub-indices climbed above 50, a broad-based return to expansionary territory (see table).

Lower borrowing costs have also been a tailwind for respondents but the forward-looking GBAI credit indices confirm the view that the mainland’s post-COVID-19 monetary easing cycle is coming to an end. An Industry breakdown shows that the manufacturing and technology sectors are leading the way, with a likelihood of the services sector catching up. By city, Hong Kong respondents remain the most pessimistic. Respondents also expect an acceleration in renminbi internationalisation in the coming year, based on the responses to thematic questions.

The GBAI current performance index for business activity rose to 42.4 in the third quarter from 37.0 previously, reflecting easing contractionary pressure. All eight sub-indices improved quarter on quarter, led by “production/sales” (up 9.6 points), “new orders” (up 11.3 points) and “profit” (up 9.4 points), indicating a broad-based recovery. This is consistent with recent official data, most encouraging being the marked pick-up in industrial production growth to 5.6% year-on-year in August (from 4.8% year-on-year in July), matching pre-COVID-19 levels. August manufacturing investment growth also turned positive for the first time in 2020, driven by strong industrial profit growth (over 19% year-on-year in July and August) and upgrading demand. The China SMEI – Standard Chartered’s monthly sentiment gauge for more than 500 SMEs throughout the economy – showed an average “new orders” sub-index of 56.5, against 52.6 in the second quarter and 39.5 in the first, echoing GBAI’s indication of solid demand ahead.

Reasons for optimism in Q4

The GBAI expectations index for business activity saw an even bigger quarter-on-quarter jump, by 9.2 points to 56.2. This clear swing from below the neutral 50 mark to above– not only for the headline index but also all eight of its sub-indices – indicates a strong consensus that further improvement in economic activity is in store in the coming months, again led by “production/sales” (up 16.9 points), “new orders” (up 11.6 points) and “profit” (up 16.1 points). Mr Lau said Standard Chartered separately tracked expectations for “new export orders”, which came in at a similarly strong 60.8, reflecting improving external demand, possibly amplified by the Greater Bay Area’s ability to resume operations and handle orders faster than most other manufacturing hubs around the world. The mainland has probably seen the steepest part of its post-COVID-19 rebound but the latest GBAI “expectations” numbers still bode well for the prospect of the mainland’s overall GDP growth returning to and being sustained at about 6% throughout the second half.

Improving growth prospects are dampening expectations for more monetary policy support. The GBAI current performance index for credit rose marginally to 45.9 from 45.3 prior, mainly because of easing cash-flow stress, as reflected by the surplus cash sub-index (up 6.8 points) and receivables turnover sub-index (up 7.6 points) (Figure 2).

They are also the main drivers for the two-point increase in the GBAI expectations index for credit to 52.4, reflecting the tailwinds from prior monetary policy easing. However, both the “current performance” and the “expectations” sub-indices for bank and non-bank borrowing costs declined, suggesting borrowing costs had fallen at a slower pace in the third quarter compared with the second; the expectation is for financing costs to stop falling in the fourth quarter. Standard Chartered expects the mainland’s central bank, the People’s Bank of China (PBOC), to keep market liquidity ample through open-market-operations and re-lending, but the Medium-term Lending Facility (MLF) rate is likely to be kept unchanged at 2.95% until the end of 2021, Mr Lau said.

By industry, “innovation and technology” once again scored the highest among the five designated sectors in the third quarter. Riding on the Greater Bay Area’s inherent advantage as China’s leading innovation hub, the sector is expected to receive a further policy boost given the need to seek growth from within via industrial upgrading, and to reduce its dependency on technology imports amid rising decoupling risk with the United States. Equally impressive this time, however, is the “manufacturing and trading” sub-index, which seems to have been lifted by the swift normalisation in domestic demand, as well as the gradual recovery in exports with second quarter lockdowns lifted in many economies. Manufacturing respondents reported a 6.2-point rise in “current performance” to 43.3, and a sector-best 10.3-point increase to 57.2 in the “expectations” sub-index.

Services sector expected to catch up

“Retail and wholesale”, which barely rose in the third quarter, had the lowest “current performance” sub-index for business activity (36.9) among the five designated sectors; its “expectations” score, however, climbed to 50.5, beating “professional services” (47.6) and “financial services” (46.5). The financial sector, which outperformed in the second quarter, could start to see the drag from rising non-performing loans; banks’ still-cautious approach towards lending to retail respondents (36.0) – alongside retailers’ relatively weaker cash positions – also helped explain retailers’ low current credit performance (41.7).

Renminbi internationalisation back in the spotlight

The survey’s thematic questions focused on respondents’ views on renminbi internationalisation. Standard Chartered recently noted clear policy signals that the mainland is making a renewed push towards renminbi internationalisation, possibly fuelled by the rising risk of financial decoupling with the US. Noting the strong motivation for the mainland to prepare for – and limit any fallout from – a potential disruption of access to US-dollar liquidity and clearing, the bank expects two-way capital account opening and redenomination of trade and investment to accelerate again. The Greater Bay Area, an aspiring megacity cluster that thrives on promoting cross-border integration, especially with Hong Kong, is one of the mainland’s designated testing grounds for financial liberalisation.

Of the respondents, 46% said their business would benefit more from renminbi internationalisation by operating in the Greater Bay Area compared with other mainland cities-regions; the top three reasons cited were “stronger policy support” (22.0%), “sizeable international trade” (20.8%) and “closer ties with Hong Kong” (13.4%). Moreover, 42% expected the overall pace of renminbi internationalisation to accelerate in the coming year. Asked whether they planned to use more renminbi for cross-border and/or offshore activity in the coming year, 23% of respondents said they would. The top three reasons given for increasing renminbi use were “wider acceptance among their clients”, “strong directional view on the renminbi outlook” and “currency diversification to hedge risk”.

Of the respondents 66% said they were already using renminbi trade settlement, and 45% said they planned to start using or increase usage, both way above other renminbi products such as cross-border cash pooling, investment and capital raising. Currently just 3.1% of respondents said they have offshore renminbi holdings (CNH). Among those that do, CNH accounts for a material 26% of their total holdings on average. Meanwhile, 38% of respondents said they have US dollar holdings, which account for a significant 45% of their total holdings on average. These findings reflect plenty of room for further renminbi redenomination, even if the transition is likely to be gradual.