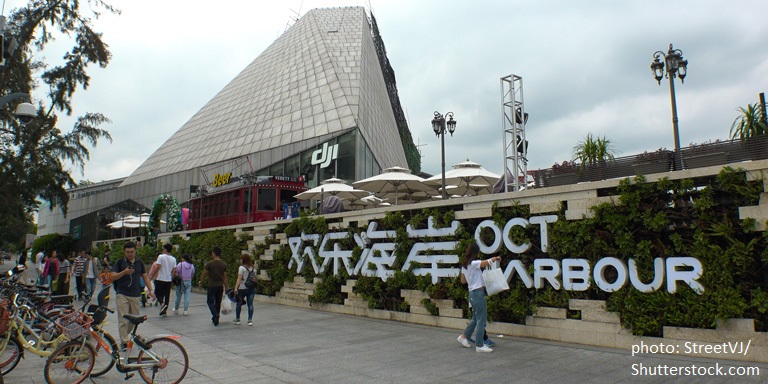 Businesses believe the city is well-placed to serve as a hub connecting the world with this fast-growing region.

One of the most profound changes the world has seen in the first two decades of the 21st century has been the massive expansion in Mainland China’s economy. With the growth has come diversification and specialisation, including geographic diversification, underlined by the Guangdong-Hong Kong-Macao Greater Bay Area, which groups the Hong Kong and Macao special administrative regions with nine cities and their environs in the neighbouring Guangdong province, including Shenzhen (main picture). The area is rapidly maturing into its role as a launching ground for new companies, technologies and entire industries.

As a highly open and internationalised city in the Greater Bay Area, as well as a hub for international finance, logistics and transportation, professional services, trade and aviation, Hong Kong plays an important role in the region. A recent survey showed that senior business executives generally recognise Hong Kong’s advantages as an international business hub for the Greater Bay Area, including its robust legal regime, open business environment, free-market economy, robust infrastructure and transportation systems as well as its quality pool of international talent.

The survey was commissioned by the Hong Kong Trade Development Council (HKTDC) and conducted by global accounting and business-services firm PricewaterhouseCoopers (PwC) to obtain detailed insights into Hong Kong’s role in the Greater Bay Area. PwC surveyed nearly 500 senior executives from the area to gauge their views on how six major industries – financial services, logistics and transportation, trade services, manufacturing, legal and dispute resolution and innovation technology – can leverage Hong Kong’s advantages in business operations. The consultancy firm also made suggestions on how to reinforce the city’s position as an international business hub in the Greater Bay Area, assessing the potential opportunities and likely challenges.

Survey respondents believe the five trends most important to Hong Kong in the next five years are: increasing application of emerging technology; integration of Hong Kong with the Greater Bay Area, including capital connectivity; increasing cross-boundary transactions due to the Belt and Road Initiative; extending global value chains out of the Greater Bay Area; and industrial upgrading and transformation in the area.

Respondents believed that to further enhance Hong Kong’s position as the international business hub for the Greater Bay Area, the five most important measures the city has to take are: facilitate the free flow of capital within the area; improve data privacy protection; improve the research and development (R&D) capability of Hong Kong by encouraging R&D activities and the adoption of emerging technologies; promote tax simplification/harmonisation in the Greater Bay Area; and promote regulatory transparency in the area.

“For the sake of the financial sector, Hong Kong should facilitate cross-border capital flow, take the lead in reforming its financial regulatory system and financial products and services, and develop sustainable and green finance,” Ms Tsang said, citing the report. “In the area of professional services, those who have completed professional training programmes should be allowed to practise in specific areas within the Greater Bay Area. Hong Kong should also enhance its position as an international arbitration centre and establish itself as a protection base and trading platform for intellectual properties in the area.”

Ms Tsang added that to reinforce Hong Kong’s position as a logistics, transportation and trading hub, the city should facilitate the flow of people and goods to and from other cities in the Greater Bay Area. “Hong Kong should also establish a unified product quality certification mechanism with other cities in the area for innovative services and products yet to gain international certification. This could reinforce the city’s position as a centre for testing and certification,” she said.

Suggestions were also made to capitalise on Hong Kong’s advantages as an innovation and technology centre by supporting the industry’s development, creating an ecosystem in which Greater Bay Area cities’ relative advantages can complement each other and develop in concert, and attracting venture capital institutions to the city. Hong Kong should also extend preferential policies for setting up businesses in the city to further attract Greater Bay Area enterprises to expand their business. This would help to make Hong Kong more attractive as a location for business headquarters.

At the news conference, the Council also announced that the HKTDC Export Index has risen for the second consecutive quarter, indicating that exporter sentiment continues to improve. The reading for the third quarter of 2020 stood at 25.1 – up 6.9 points from the previous quarter, and 9.1 points from the record low in the first quarter of this year. HKTDC Director of Research Nicholas Kwan noted that export indexes continued to contract in all major industries despite the recent rebound. Times will remain tough for Hong Kong’s exporters, he added.

As the initial COVID-19 pandemic shock begins to wane, the number of exporters having orders cancelled, payments deferred or logistics and distribution disrupted fell significantly from the previous quarter. Mr Kwan noted that 60.5% of respondents indicated that reduced orders from buyers was the biggest challenge they faced, up 3.5 percentage points from the second quarter of 2020. A number of exporters (23%, up 4.9 percentage points) said they had to downsize companies and in some cases lay off workers.

“Fewer respondents (51.5%, down 13.1 percentage points) regarded the continuation of the pandemic as the biggest threat to their export performance over the next six months, with more of them concerned about softening global demand (21.5%, up 2.5 percentage points) and trade tensions between the United States and [Mainland] China (15%, up 4.2 percentage points),” Mr Kwan said.

The HKTDC conducted its latest business confidence survey in August, interviewing 500 local traders from six major industry sectors including electronics, jewellery, timepieces, toys, clothing and machinery. The HKTDC Export Index reflects the prospects of the city’s near-term export performance. Readings above and below 50 indicate an optimistic or pessimistic outlook respectively.

“Export indexes for all major sectors rose from their lowest readings in the first half of 2020, especially the machinery sector (29.0), toys (27.5) and electronics (25.3), followed by timepieces (21.6), clothing (21.0) and jewellery (20.1). Exporters’ perception on the performance of major markets remained largely unchanged, with Japan (46.1) and Mainland China (42.9) regarded as the most promising markets for Hong Kong exports, followed by the United States (41.2), the Association of Southeast Asian Nations (ASEAN) bloc (41.0) and the European Union (36.0),” HKTDC Economist Samantha Yim said.

Ms Yim added that the Procurement Index, Offshore Trade Index and Trade Value Index all began to stabilise in the third quarter whereas the Employment Index dropped 2.3 points to a four-year low of 39.8. “Compared with other industries, recruitment intentions in toys (38.0) and timepieces (35.6) were notably downbeat, suggesting the probability of headcount losses within these sectors.”