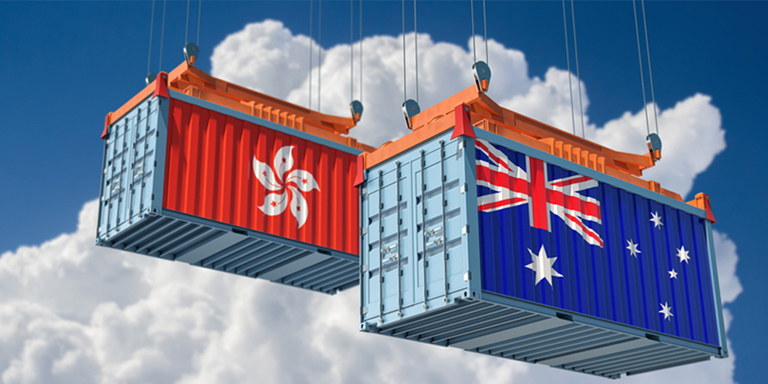 The Hong Kong-Australia Free Trade and Investment Agreement has proven a success, delivering a particular boost to the e-commerce sector.

Given the economic, social, scientific and political issues that continue to dominate news agendas it is perhaps no surprise that the six‑month anniversary of the implementation of the Hong Kong Australia Free Trade and Investment Agreement has largely gone unacknowledged. This, however, does not necessarily suggest the deal has little or no ongoing significance.

When the agreement was signed in early 2019, it marked the end of two years of negotiations, with both jurisdictions keen to broaden their already close ties. It also came some four years after Mainland China and Australia had implemented their own historic Free-Trade Agreement (FTA), a deal that Hong Kong was not a party to.

Overall, there were a number of convincing arguments for striking such a deal. In 2018, Hong Kong was Australia’s 12th‑largest trading partner and, at A$52 billion (US$37 billion), the 11th most significant destination for Australian foreign stock investments. For the same period, the country’s two‑way trade in goods and services with Hong Kong was valued at A$17.8 billion, according to figures provided by the Australian government.

One sector, in particular, has been singled out as a development priority – e‑commerce.

In line with this, the FTA featured a number of related provisions, extending across e‑signatures, paperless trading, cross‑border digital payments, the protection of personal information and reduced restrictions on the location of information technology (IT) facilities. While it’s undeniably an expanding sector, it’s also, latterly, become essential for businesses at a time when many are still reeling from the impact of COVID-19.

One Australian businessman with particular expertise in this field is Jackson Meyer, Chief Executive of Verus Global, a Melbourne‑headquartered freight‑forwarding specialist. Launched in 2019, the company works closely with a number of high‑profile e‑commerce businesses, shipping everything from stationery and skincare products to oil and drilling materials out of Hong Kong via both air and sea routes. Although a relatively new business, the company already has a presence in 14 locations worldwide, including offices in Australia, Hong Kong, Mainland China and the United Kingdom. In its first full financial year, the company recorded impressive sales of A$43 million.

Explaining just how Hong Kong has played a pivotal role in the company’s success to date, Mr Meyer said: “When it comes to doing business with overseas companies, having a presence in Hong Kong has really helped to facilitate transactions. As we do a lot of business in Europe, we tend to meet our European partners in Hong Kong, largely because it’s relatively central. It’s an arrangement that’s helped us generate a lot of business.

“Overall, operating out of Hong Kong is extremely easy, largely because it’s home to a business community that’s accustomed to making things happen. This becomes apparent to overseas agents when they visit and meet people who are clearly keen to identify the optimum end product, while working out how best to collaborate.”

Of late, of course, the measures put in place to contain the global spread of COVID-19 have curtailed Mr Meyer’s opportunities for visiting Hong Kong on a regular basis. While having resorted to online communications channels in the interim, he firmly believes that online platforms remain a poor substitute for actually interacting with business colleagues and customers on a face‑to‑face basis. Summing up his concerns, he said: “Overall, the hardest part has been not being able to catch up and mingle with many of our overseas partners.”

Undoubtedly, it has been a challenging year for the freight‑forwarding sector, with Verus Global among the many businesses that has had to contend with reduced sailing schedules and limited air‑freight options. Despite all this, Mr Meyer remains relatively upbeat, saying: “We’ve actually seen increasing orders and sales, particularly in the case of those coming out of [Mainland] China.

“At the same time, while the actual cost of producing goods is undoubtedly increasing, the quality of those goods is terrific. If you have to find a new supplier, there’s inevitably going to be ups and downs. The chances are, though, that you will still end up with a fantastic product.”

Another Australian company looking to capitalise on the new opportunities represented by the FTA is Think China, a Sydney‑headquartered e‑commerce and digital marketing consultancy that also has offices in Mainland China and Hong Kong. In the case of the latter, three years ago it established a dedicated presence in Causeway Bay, where it now employs 20 full‑time staff with a focus on helping brands market to Chinese‑speaking consumers throughout Macao, Taiwan, Malaysia, Singapore, Australia and New Zealand, as well as both Hong Kong and Mainland China.

As well as working directly with a number of global brands – notably L’Oréal, Fiji Airways and Bayer – Think China also helps small and medium-sized enterprises (SMEs) set up e‑commerce stores, including training staff to manage online sales and marketing in‑house. According to Benjamin Sun, the company’s Co‑founder and Managing Director, an ever‑increasing number of clients have been looking to grow their online sales capacity since the Covid-19 outbreak began early this year.

Outlining the changes as he sees them, he said: “All our clients now have their own e‑commerce website or channel – up from about 50% just four or five months ago. Although some of these sites aren’t perfect, they all incorporate an online sales facility. This shift has also had an impact on ad spend and promotional strategies. While many businesses used to prioritise PR and look to work with influencers, everything is now geared to driving e‑commerce.

“Crucially, if you got your e‑commerce right in Hong Kong, it’s going to help build your brand presence across [Mainland] China. Indeed, for the majority of Australian SMEs, Hong Kong is still seen very much as the gateway to the mainland.” The Jewel of Hong Kong: The Magic of Jade