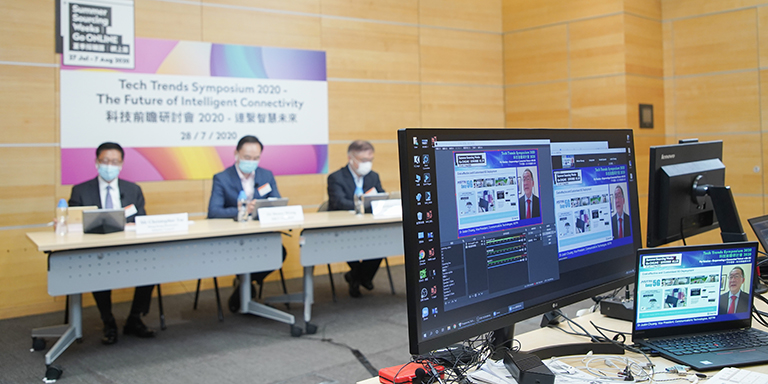 A host of sectors in Hong Kong are set to leap ahead by unleashing the power of AI on these freshly launched networks.

A 5G network provides much more than just increased bandwidth and speed - 5G provides the opportunity to deploy artificial intelligence (AI) technology to bring the much-discussed Internet of Things (IoT) out of the laboratory and into the real world. To give people from all walks of life a better understanding of 5G networks, the Hong Kong Trade Development Council (HKTDC) held the Tech Trends Symposium 2020 – The Future of Intelligent Connectivity on 28 July. Forming part of the HKTDC’s Summer Sourcing Weeks | Go ONLINE virtual trade fair (27 July-7 August), the symposium was streamed online (main picture). At a session titled “Empowering a Connected Future with 5G”, industry leaders introduced the latest developments in 5G networks and expressed the hope that Hong Kong will keep pace with the world in moving towards 5G and building a smart city .

More importantly, Mr Chuang pointed out, 5G networks could deploy artificial intelligence (AI) and a marriage of the two would completely change the ecology of manufacturing. Factories would be able to use automated vehicles, robots and monitoring sensors. AI applications, instead of human managers, would coordinate and monitor this fully automated production system. Human engineering expertise could be applied to remotely formulating workflows and ordering work patterns. The saved human resources could then concentrate on quality monitoring and decision-making, said Mr Chuang. He believes 5G is not only a new era of networks but also a way to promote the progress of the entire city.

Henry Wong, Head of Strategic Wireless Technology & Core Networks at local telecommunications company HKT Limited, said network technology in Hong Kong has advanced step by step in recent decades from voice and data Internet access to the latest 5G networks. The speed and usage pattern of the network had improved.
During the 2G and 3G eras, watching videos was just about viewing. With 4G came high-definition videos and video conferences but the network was prone to time delays and freezes or even bad frames on screen.

5G, however, supports not only a wide range of visual innovations such as high-definition multi-dimensional 360-degree images, but also interactivity thanks to virtual reality (VR) technology which enables the screen view to change to match users' movements and become whatever the user wants to see.

4G technology was unable to fully support VR, and there were lags and delays in transmitting images, which greatly weakened the application of VR, Mr Wong added.

Changes are also impacting television broadcasting. Citing the example of HKT’s pay TV,  Mr Wong said on-demand viewing, as opposed to the traditional broadcast-by-schedule model, has been introduced in recent years and audiences can freely choose viewing times for content such as concerts, sports events and more without the limitation of a schedule, which improves convenience. The 5G network can combine these two modes to give high-definition, freely selectable content, even including 360-degree virtual-reality images, presented directly to the audience, he remarked.

In addition to expanding network bandwidth, 5G permits the era of the Internet of Things (IoT) to begin in earnest, according to Andrew Young, Associate Director (Innovation) for Sino Group, A leading Hong Kong real-estate developer.

IoT applications are more reliable on 5G networks with less time delay and the ability to process large amounts of data quickly and efficiently. In the real-estate sector 5G networks could be used in such applications analysing the flow of people in shopping malls and gauging their consumption habits, helping managements adjust the distribution of stores and arrange activities based on the analysis.

These 5G technology applications could become "pervasive". Mr Young pointed out that 5G can handle a large amount of data but the subsequent data processing and storage would inevitably raise network security concerns. While the networks develop rapidly, personal information and network security should also be protected, so the 5G network can continue to grow healthily.

Noting the potential of smart buildings and related technologies, Sino Group established the Sino Creative Research and Development Office in 2018 to monitor related technology trends and introduce technologies such as artificial intelligence (AR) and robotics into the group's business. It analyses the potential of innovative technology, including 5G, under three criteria - business model, operation process and customer experience.

Safe passage through the metaverse