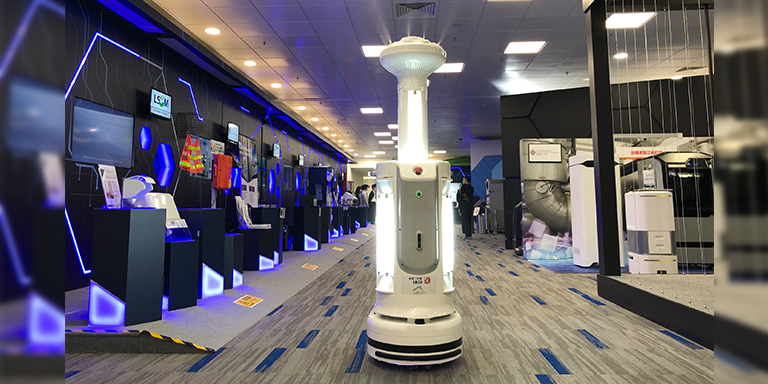 Faced with arrivals streaming in from across the world, the transport hub of Hong Kong urgently needed an intelligent disinfecting solution.

The COVID-19 outbreak has underscored the need to regularly clean and disinfect surfaces in areas where large numbers of people congregate and pass through - such as airports.

Noting the problem applied to its premises, the Airport Authority Hong Kong (AA) has deployed the Intelligent Sterilization Robot (ISR) to thoroughly disinfect lavatories at Hong Kong International Airport, drawing a great deal of interest in the process. The robots, which developers say can eliminate as much as 99.99% of bacteria and viruses in the air and on the surface of objects, was built by Hong Kong medical device maker Time Medical Systems.

Storm in a port

The AA fast-tracked plans to automate sterilisation in the early stages of the COVID-19 outbreak when faced with the task of dealing with the arrival passengers airlifted from the Diamond Princess cruise ship, which had been stranded in Japan in February. At that stage sterilisation was a sticking point for authorities who were trying to arrange charter flights to take the Hong Kong passengers from the cruise ship and return them to the city, because all the passengers had potentially come into contact with the virus. Every part of the airport would need to be strictly disinfected but this was not a problem that could be solved simply by increasing the number of staff involved. Realising the problem, Time Medical suggested the AA use the company's intelligent disinfection robots for this task.

Alec Leung, Time Medical Vice-President – International Sales & Marketing, said the company arranged an on-site demonstration of the robot disinfection procedure and invited a university laboratory to test the bacterial killing efficiency before and after disinfection. Seeing the results, the AA decided to deploy the robots. When the Hong Kong passengers from Diamond Princess came through the airport, the AA ensured full disinfection to avoid cross-infection. The AA noted the robots' work performance and bought a batch from Time Medical. The ISR team has since then been serving passengers and airport employees.

Mr Leung said the firm began cooperating with a robot manufacturer in Shanghai three years ago, and they spent a year developing and upgrading products. The upgraded ISR can perceive objects as much as 25 metres away, letting it avoid obstacles more flexibly. Managers enter details of the area to be disinfected, and the machine then performs the task automatically. He described the robot as the first one in the world with three disinfection modes – it has nine units of disinfecting Ultraviolet-C lamps, nine units of atomisers that spray liquid disinfectant as well as two HEPA filtration modules with plasma generator for complete disinfection. A single robot can disinfect up to 15,000 square feet (1,400 square metres) in a session.

Health authorities in leading economies, including the European Union and Australia, had certified the disinfection robots. The robots were launched on to the market two years ago but mainly in hospitals. The airport deployment could be regarded as the first time these robots have appeared in a non-medical institution. The airport deployment showed that such intelligent disinfection robots are being accepted for use in a wide range of venues such as shopping malls, exhibition halls, schools and commercial buildings. Mr Leung said the firm had started to receive many inquiries about the ISR.

He said most disinfection robots under development have just one disinfection mode. One or two competitors in the world could produce dual-mode disinfection robots but their technology had yet to mature. Mr Leung likened developing such technologies to moving against the wind; it required continuous effort. He said the company would not be complacent and would continue to conduct research, including improving the functions of the AI enabled robots, and developing intelligent robots with other functions to maintain market competitiveness.

The outbreak had raised public awareness of hygiene but people carrying out disinfection work are also humans, Mr Leung pointed out. The vulnerability of staff, who could contract the disease while carrying out disinfection, is another key motivator for outsourcing the work to robots. Mr Leung said the successful airport deployment showed the potential market for intelligent disinfection robots is no longer limited to medical institutions, and had boosted his confidence in prospects for the business. The firm will split the disinfection robots into an independent department to streamline the business.

Time Medical is also focusing on overseas markets since the COVID-19 outbreak is global. Mr Leung indicated that it will actively consider participating in the exhibitions to let more overseas buyers know about the company’s products. The Hong Kong Special Administrative Region Government has also launched a series of special funds to support Hong Kong enterprises "going out".