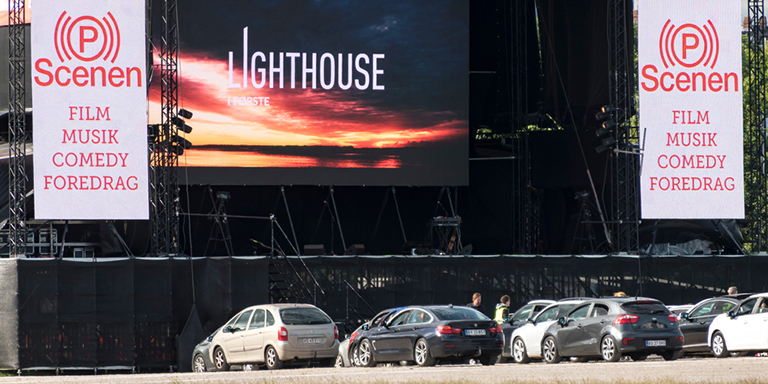 As the pandemic transforms businesses across the world, futurist Gerd Leonhard sees ample opportunities for start-ups to thrive in the ‘new normal’.

The COVID-19 pandemic has brought drastic changes for all businesses with sectors such as cruise liners going into suspended animation while others, such as entertainment, transform themselves with such innovations as drive-in concerts (main picture).

How will the business change in the new COVID-19 reality? Renowned futurist Gerd Leonhard outlined his vision at an online seminar, “T-Chat: Futurizing your Business: Renaissance from the Age of Digitalization”, held on 16 July as part of this year’s HKTDC Entrepreneur Day (E-Day) programme. He predicted t there would not be a post-COVID return to normality, and the new normal would be very different.

His presentation itself underlined the drastic transformation the world is going through into this new normal. Mr Leonhard presented from this home in Switzerland, rather than flying to Hong Kong. Recognising that the new reality allowed fresh presentation style, he displayed words and images next to him as he spoke, rather than the standard format of addressing a series of images projected on a screen.

The world is undergoing a Great Transformation, he said, with four “bigs” playing a leading role – Big Tech, Big Media, Big State and Big Health. The result would be “Hellven” -- it could be Heaven or Hell depending on how it is handled, he cautioned.  The future presents utter uncertainty, he added, and businesses needed to abandon traditional, pre-COVID ways of doing things and adopt a VUCA – volatility, uncertainty, complexity and ambiguity.

Technologies were developing extremely fast, and the COVID-19 pandemic was accelerating this, Mr Leonhard noted. He quoted the late economist Milton Friedman who said: “Only a crisis - actual or perceived - produces real change. When that crisis occurs, the actions that are taken depend on the ideas that are lying around.” And there are ample new technologies and ideas “lying around” at present, the futurist pointed out.

The crisis and technological potential would drive extremely rapid, disruptive change, he said, with more progress over the next decade than the world had seen over the previous three centuries. He expected computers to match many human capabilities as early as 2027, and asked if humans are ready for the “future shock” that such changes would bring.

Mr Leonhard said 10 game changers would shape developments over the coming decade. The COVID-19 pandemic had accelerated these changes. “It’s as if you pressed the warp button and we go off to change land.”

The first game changer would be “data everything” – with data the “new oil”, businesses needed to have the numbers in hand to go forward. “Lots of start-ups in Hong Kong and all over the world are dealing with data.”

Another game changer would be “compute everything – quantum computers would increase the computing power available by many orders of magnitude compared with the classic machines working today. The fifth game changer will be “understand anything” – natural language processing will let mankind speak to machines as if they were humans. “I can say ‘fix the focus on this video’ and it will just know what to do,” explained Mr Leonhard.

“Smart anything” will be a further game changer as machine learning greatly increases the ability of machines and systems to adapt to change. “Transactions” will join “communications” as a game changer, as blockchain technologies greatly expand the scope for, and reliability of, transactions.

Another game changer Mr Leonhard sees which has great relevance to any merchandise traders is the distribution of production. Improvements in the scope and quality of three-dimensional (3D) printing mean items can be produced anywhere. “We will be able to print anything from our tennis shoes to our wrist watches,” noted the futurist, adding this was already happening in the medical industry, with printing of such components as kneecaps and ear lobes.

Massive increases in the power of media technologies would expand the scope of media offerings, letting people of the future “see everything” through such technologies as virtual reality, according to the futurist. He said work-from-home had given this phenomenon a big boost, while improvements in genetic engineering made it possible to change anything – which had massive ethical implications.

Mr Leonhard said the world would move from EGO-systems, where an individual or small group controls everything, to ecosystems, where cooperation is key.

A concern many people have about the future is automation and the rise of robots removing many jobs. The futurist quoted roboticist and artificial intelligence authority Hans Peter Moravec who said what is easy for computers is hard for humans, and vice versa. Employment involving routine, easily reproduced tasks would be automated while those needing unique, human responses would grow. Employees who acted like robots would soon find themselves out of work, Mr Leonhard warned.

Digital ethics would become critical going forward – whether it was those developing artificial intelligence (AI) applications considering the consequences of their inventions, or social media platforms changing their policy of ignoring harmful content. Technology is morally neutral until used, and ethics needed to become a layer within applications, opined the futurist.

Addressing the topical issue of work-from-home, Ms Belin said this would lead to a cultural shift within companies. A key issue would be motivation – what drives people to login from home? Purpose-driven companies would do well in a work-from-home setup. One change that had already taken place was a universal acceptance of virtual conferencing – which the panel members themselves were taking part in. “No one will argue against a virtual conference now,” she said.

Professor Charm said digital, virtual connections greatly increased the potential for entrepreneurs, since the most successful start-ups had a diverse team, in that they were drawn from many parts of the world. Many Hong Kong start-ups began with a set of fellow-students but drawing team members from abroad would let them open up regional markets and build a diverse team, leveraging talents from outside.

Mr Chia said the switch to virtual meetings had greatly increased efficiency. Less time and resources were wasted flying to other cities for meetings or conferences, everyone could simply log in from their desks within seconds. However, he added, work-from-home meant staff needed to be more disciplined and engaged in their work.

Mr Leonhard said physical presence still had a place “You could watch 100 hours of video on the Mumbai night market but within just two seconds of actually being there, your perceptions would be radically different,” he pointed out. He believed work-from-home and the office each had a place, leading to a hybrid model.

Looking ahead and considering resource allocation, Mr Leonhard pointed out that the oil and gas sector employed just 10 million people and had a huge impact on climate change. Conversely the renewable and nuclear energy sectors could employ 100 million people and benefit the climate. Therefore, he saw a shift in investment from the former to the latter and many start-ups would operate in this area.

Prof Charm said the COVID-19 crisis would bring golden opportunities for start-ups since many firms were investing heavily in technology as the pandemic-associated changes, such as consumers staying away from shopping malls, were disrupting established business models.