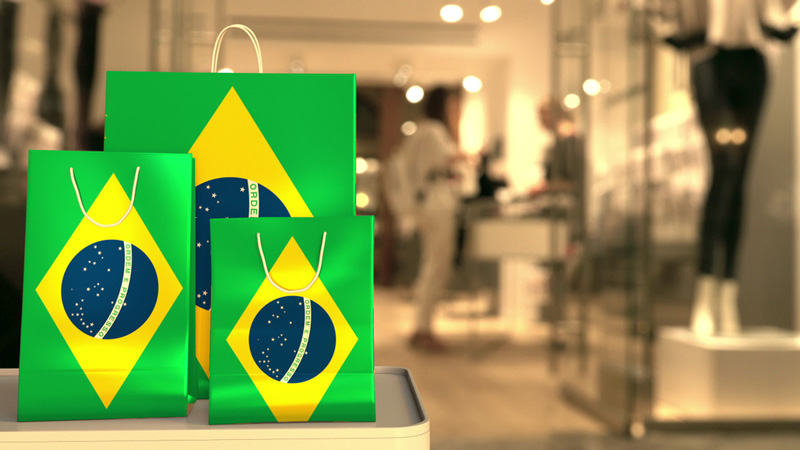 With a population of nearly 210 million, Brazil is the biggest consumer market in Latin America, boasting an aggregate retail sales value of R$1,688 billion (~US$420 billion) in 2017[1]. Over the 10 years ending 2017, the Brazilian retail market tripled in size, posting an uninterrupted yearly growth at a compound annual growth rate of more than 12%, and showed strong resilience during the 2014-16 economic crisis.

While hypermarkets and supermarkets remain the key sales channels of food and groceries in Brazil, accounting for almost one-third of retail sales in 2017, department stores and specialised stores are becoming more popular destinations for other consumer products such as fashion, consumer electronics and personal care for Brazilian shoppers.

Hong Kong companies, being some of the world’s leading traders for many consumer goods, should keep a close eye on the potential of the sizeable Brazilian consumer market. Taking specialised stores as an example, the fashion industry alone was a US$40-plus billion market, while the electronics and electrical appliances sector recorded sales of more than US$20 billion in 2017. Other consumer products, such as sporting goods, eyewear and lighting items were also promising segments in the Latin American country.

Not surprisingly, electronics are Hong Kong’s major export to Brazil, accounting for almost 80% of the city’s total exports or US$1.24 billion in 2018. Also worth noting, however, is that Hong Kong exported a wide array of consumer goods to the Latin American nation, including watches and clocks (US$92 million), giftware (US$50 million), spectacles (US$27 million), clothing (US$20 million) as well as toys and games (US$15 million) in 2018.

Hong Kong’s exports to Brazil have been increasing in line with the Latin American country’s economic recovery from its 2014-16 downturn. The city’s exports to Brazil contracted by a yearly average of more than 13% before resuming positive growth of 21% in 2017, 5% in 2018 and 24% in the first half of 2019.

Asia, including Hong Kong, is widely regarded by Brazilian buyers as their key sourcing hub. Although most big names such as Lojas Pernambucanas (a department store) and Lojas Renner (a fashion chain) have already set up their own buying offices in mainland China or other locations in Asia, most, if not all, small- and medium-sized Brazilian buyers still regularly attend and buy at trade fairs in Asia and rely on local trading companies in Brazil.

To boost their chances of success, Hong Kong companies should prepare themselves for the fact that not all Brazilian buyers are looking for finished products. To cope with the high import tariffs for finished consumer goods, many Brazilian buyers are actually looking for suppliers of parts and components for further processing and assembling in Brazil. This explains why more than 80% of Hong Kong’s electronic exports to Brazil in 2018 were parts and components. The same pattern appears in the timepieces sector where complete watches and clocks represented only 22% of the relevant exports in 2018.

Another tip for Hong Kong traders seeking to win business is to be prepared to support their Brazilian buyers’ product compliance requirements with testing and certification services. For instance, most B2B products, including consumer electronics, household appliances, medical devices, toys and auto parts, require INMETRO certification. Having one’s product certified by an INMETRO accredited Certification Body provides assurance that the product complies with Brazilian regulations and required safety standards. Failure to provide certification could lead to products being banned and a hefty fine being imposed.

Traditional distribution channels aside, many suppliers, including Hong Kong traders, are making inroads into the Brazilian e-commerce market, which saw growth of 20% or more per annum for most of the last decade and hit an all-time high of R$49 billion (~US$12 billion) in 2017. While brick-and-mortar retail, responsible for 95% of total retail sales in 2017, remains by far the major distribution channel in Brazil, the fast-growing e-commerce channels have increasingly drawn the attention of both local and international retailers, e-tailers, e-commerce platforms and service providers.

While online sales are estimated to account for no more than 3% of total retail sales in Brazil, online purchase is becoming more and more popular among Brazilian consumers, especially for products like footwear, leather and travel goods, electronics and electrical appliances and cultural, recreational and sporting items.

To capture the growth, an increasing number of local Brazilian retailers have started their own online marketplaces. While for most of these new e-commerce players, the virtual marketplace accounts for no more than 10% of their overall sales turnover, there are some very successful local players who have brought their success in traditional retail to the new e-commerce arena. The best example to illustrate this is B2W Group, which has adopted an online to offline (O2O) model to synergise among its 1,400+ physical stores under the brand “Americanas”: it has three e-commerce platforms, including Brazil’s second-largest e-commerce website Americanas.com, and is now generating more than half of its sales online.

For Hong Kong sellers wishing to share a slice of the vibrant Brazilian consumer market, e-commerce is an increasingly viable option. Postal shipments of goods with a customs value of no more than US$50 can enjoy tariff-free access to Brazil, and B2C transactions are free from INMETRO testing and certification requirements.

To tackle the listing requirements such as National Register of Legal Entities (CNPJ) registration, foreign suppliers who want to sell on local Brazilian e-commerce platforms such as Americanas.com will find it easier to work with cross-border platforms, which have strong presence and recognition in Brazil, including AliExpress from mainland China as well as Wish, Amazon and eBay from the US. But this may be less convenient to the consumers, if those sites do not allow them to pay in Brazilian reals (BRL) or to pay by instalments using local credit cards/ debit cards.

A more practical fix to this dilemma is to consider using a cross-border platform operated by a local Brazilian retailer. For example, in March 2019, B2W Group launched a cross-border e-commerce platform Americanas Mundo, which is not only fully incorporated into the Americanas.com website to maximise customer reach, but enables shoppers to pay in local currency by credit cards/ debit cards[2], while the foreign suppliers are paid in US dollars.

Since its inception, some 60 merchants, including Hong Kong’s StrawberryNet (an online discount beauty store) have listed on the Americanas Mundo platform, with an average shopping cart price of R$600 (US$150). In view of the rapid development of e-commerce in Brazil and the lower entry barriers in terms of import taxes and certification requirements, Hong Kong traders can take advantage of this up-and-coming distribution channel to test the demand for their products in Brazil in a more accessible manner.

Interested Hong Kong suppliers should however take heed of the various pricing and fee mechanisms of different e-commerce platforms, and the fulfilment headaches of dealing with domestic logistics in Brazil. Currently, Americanas Mundo charges commissions of 25-30% of the sales proceeds, depending on the overall monthly sales. These rates are higher than some international platforms, although there are no extra charges for platform management, transaction and marketing.

Shipment lead time varies from carrier to carrier and it can take up to 30 days for goods shipped from Hong Kong to arrive at the Port of Santos – the largest and busiest container port in Brazil. But this is not the end of the story, since the last stage of delivery from the port to the final customers, which includes customs clearance, is usually the trickiest part of the whole fulfillment process.

While most e-commerce shipments – both local and cross-border – in Brazil are handled and delivered by the Brazilian Post (Correios), thanks to its unrivalled distribution network across all 5,570 Brazilian cities, finding a reliable logistics partner with customs brokerage experience is considered increasingly important to the success of e-commerce businesses in Brazil. Hong Kong-listed Kerry Logistics has nearly 30 years of experience in the Brazilian market and has representatives in major cities in the country, with international airports and port coverage, bonded warehousing capacity and domestic door-to-door distribution solutions.

The recent joint venture between Kerry Logistics and the National Post of Spain (Correos) to launch a parcel delivery service in the Brazilian market, for example, is poised to lend further support to Hong Kong traders in handling the last mile delivery, which can be shortened to around 30 days from a norm of 2 months’ time.

[2] With a possible exemption from the 6.38% federal tax on financial transactions (IOF) available with regard to cross-border transactions.