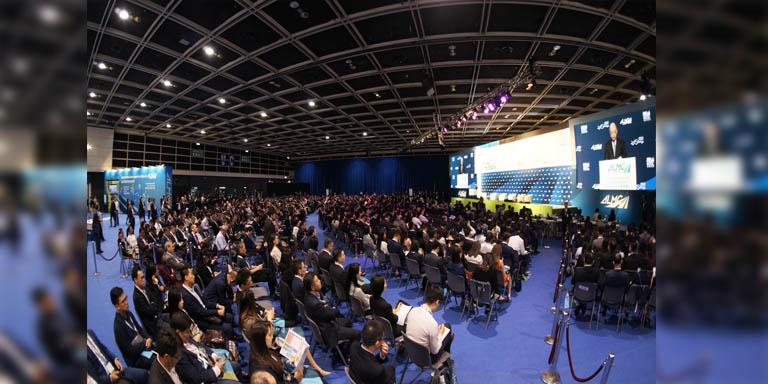 Commoditisation of the shipping business leads firms to pay attention to the entire value chain.

A trading port since its foundation, Hong Kong has always been at the cutting edge of shipping innovation, adapting as new technologies and geopolitical shifts transform the industry.

The ninth Asian Logistics and Maritime Conference, organised by the Hong Kong Trade Development Council (HKTDC) and Hong Kong Special Administrative Region Government, recognised this history with its theme, “Connect and Innovate: Navigating Challenging Times”. During the event’s two-day run on 19 and 20 November 2019, many delegates pointed out that the shipping industry was becoming commoditised – with providers competing solely on cost. This meant transport and logistics firms needed to start paying attention to the entire value chain – from source to the end-user. At the same time, trade disputes and uncertainties around the globe, along with ever-changing trade and consumption patterns, present both challenges and opportunities to the logistics sector.

“The focus of this year’s event is on regional connectivity and opportunities against the backdrop of global economic and geopolitical challenges,” HKTDC Executive Director Margaret Fong said at the event’s opening. “Fostering connectivity is especially important considering the Guangdong-Hong Kong-Macao Greater Bay Area development, which joins together the cities of the region to generate new flows in trade, capital and people, helping create fresh business opportunities for the logistics and maritime industries.

“With rich experience in both international and Asian business, as well as world-class expertise in a suite of services, Hong Kong is ideally placed to be the commercial hub for such an initiative.

“Under this year’s theme, the conference will also examine the interrelationship between supply chain management and customer experience, particularly in e-commerce, as well as the impact of innovation and new technologies in helping the industry chart its way forward,” she said.

“Trade tensions are rising around the world, resulting in a dramatic spike in import-restrictive measures,” said Coleman Nee, Senior Economist, Economic Research and Statistics Division, World Trade Organization (WTO). He pointed out that the WTO’s most recent report on trade restrictions, published in June, showed that the trade coverage of new import-restrictive measures imposed from October 2018 to May 2019 was more than 3.5 times the average since May 2012. World merchandise trade volume grew just 0.6% in the first half of 2019, and the dip in both imports and exports in Asia was similar to that in the 2015/16 slowdown.

“Trade diversion is a significant trend, resulting in some emerging markets, like Brazil and Vietnam, seeing large increases in exports, while mature markets, such as Korea and Europe, experience declining exports.” said Mr Nee.

He concluded by appealing for a multilateral trading system and emphasised that bilateral agreements are no substitute for rules that all economies subscribe to. Hong Kong is one of the world’s best examples for other economies to follow, said Mr Nee.

Omni-channel trends require distribution support, which is both a problem and an opportunity for logistics services providers, he said. Keeping supply chain costs as low as possible puts logistics providers under pressure as they need to be agile and fast. “Producers are making money on their sales, but losing money on their supply chain inefficiencies. As margins erode in e-commerce, it is especially important that costs are kept under control in the supply chain.”

Mr van Trooijen also briefly discussed the challenges and opportunities related to the shift in sourcing from Mainland China to Southeast Asia. The mainland has replaced the United States as the world’s largest e-commerce market, while the growing force of e-commerce has to be served economically and promptly by logistics providers through B2C (business-to-consumer) logistics, driving sustainability throughout the supply chain, he noted.

Operating on the concept that food is a global asset, Yamato examines how it and other logistics companies can deliver perishable food safely, and seeks to develop a shared co-creation value platform for this purpose. Mr Umetsu invited all companies at the forum to work with the firm to achieve the goal of building a food-safety cold chain that can trace products and temperature using a physical internet-driven network. As one of the largest logistics firms in Japan, with 11% of the parcels it delivers being in the cold chain, Yamato is ready to create a global platform, said Mr Umetsu. He appealed to the audience to join as stakeholders to create a global cold chain platform together.

Mr Umetsu also outlined the future for logistics, information and financial technology. For governments, this involves food safety standards, digitalisation of customs and quarantine regulations, and development of cryptocurrency. For business, this involves developing and implementing new cold chain technology.

Lau Teck Sien, Partner and CEO of HOPU Investments, discussed HOPU’s experience with, and massive investment in, warehouses, and its experience with the mainland’s massive consumption growth.

HOPU has 17 million square metres of warehouse space globally, he said. What is interesting from HOPU’s perspective is that the mainland’s per-capita GDP, which is about US$9,000 overall, but US$30,000 in some tier 1-cities. When per capita income reaches $10,000, consumption behaviour changes, said Mr Lau, with consumers buying more expensive brands, from food to footwear. This transforms retailing. In the mainland, just 40% of retailers are large retail chains, compared with 80% in Japan. But as income rises, many of the 60% “mom and pop” stores will be replaced by large chains, changing the warehousing industry.

The year 2012 was transformative for the retail industry, he added, because that was when many countries introduced 4G. “This allowed myriad start-ups with innovative apps and business models to launch new sales platforms, and allowed China to catch up with and surpass more developed countries,” said Mr Lau.

Other factors that are changing warehousing and logistics are GPS, which was expensive in the past but is now very cheap. GPS sensors have revolutionised warehousing. This efficiency lets one warehouse handle consignment volumes that previously called for two or three warehouses.

The second trend is consumer empowerment through mobile phones; this has created new demands for supply chains, which have to meet consumer needs globally. And a third trend is the trade tension between the mainland and the United States. “Even if they do agree on a simple trade deal,” he said, “there will still be many challenges, such as IP, technology transfer and ‘Made in China 2025’.”

Another trend is the Belt and Road Initiative, which represents a new phase of globalisation. The mainland government has started moving low-cost sourcing bases for high-volume products, which may benefit logistics companies in Hong Kong and the rest of the Guangdong-Hong Kong-Macao Greater Bay Area.