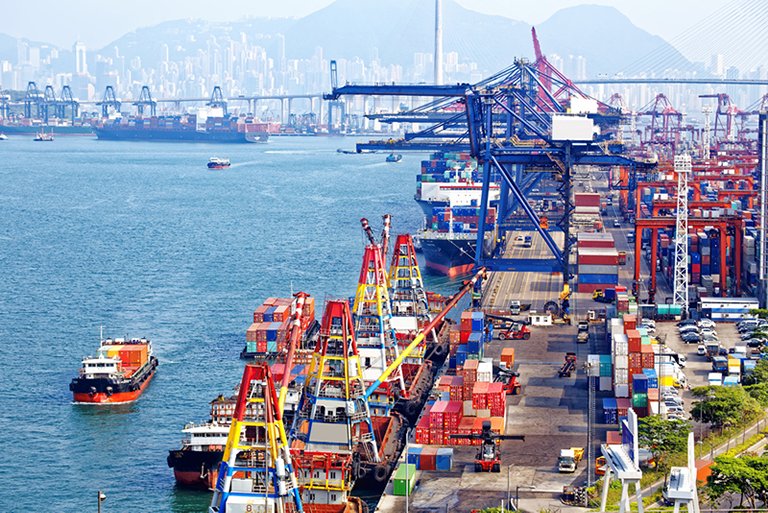 Amid lingering China-US trade tensions, softening global economic growth and a challenging operating environment, Hong Kong exports continue to lose momentum and are likely to suffer a full-year decline in 2019. As indicated by the latest HKTDC Export Index survey, conducted in mid-August, Hong Kong exporters have become more pessimistic across all major industry sectors and markets. At 27.4, the Index has reached a decade-low level, its worst since the two quarters immediately after the Global Financial Crisis: 4Q08 and 1Q09. Against this backdrop, HKTDC Research has revised its 2019 export growth forecast further downward from 2% in June to -4%.

Global economic growth remained subdued in the first half of 2019, amid protracted geo-political uncertainties and trade disruption. A slowdown in manufacturing and a drop in business confidence also hindered economic growth in the developed economies. Weighed down by weaker demand in most major economies and heightened China-US trade dispute, Hong Kong’s real GDP growth eased to a 40-quarter low of 0.5% in the second quarter of 2019, continued the weak performance of 0.6% recorded for the previous quarter and down significantly from the 3% reported in full-year 2018.

China-US trade tensions and softening global growth have dragged Hong Kong’s export performance down. Hong Kong export growth has turned negative since November 2018, and, in the first seven months of 2019, the city’s total exports fell by 3.9% year-on-year. Exports to the traditional markets – the US and China – dropped by 10.9% and 6.1% respectively. Exports to markets with strong supply-chain connections to Sino-US trade, including Japan, Taiwan and Vietnam, also suffered, falling 4.2%, 4.6% and 3.9% respectively.

Fortunately, markets not directly impacted by the Sino-US trade dispute have been less affected. During the first seven months of 2019, Hong Kong’s exports to the EU grew slightly, by 2.3%, while exports to the ASEAN markets grew by 4.6%. In addition to developing Asia, Hong Kong’s exports to other emerging markets, such as the Middle East (up 9.1%) and Latin America (up 8.4%), also recorded significant growth, partly due to greater efforts towards market diversification.

In terms of Hong Kong’s major industries, electronics exports, while constituting around two-thirds of Hong Kong’s total exports, dropped 4.8% year-on-year in the first seven months of 2019. Clothing exports recorded a decline of 7.1%, reflecting stiff competition from other production bases, particularly those in Southeast Asia. Exports of precious jewellery continued their growth momentum from last year, with a growth rate of 16.2%, the biggest gain among all the major industries. Exports of timepieces showed a slight drop of 2.6%, while toy exports dropped by 27.7%. Exports of electrical appliances maintained stable growth of 6.8%.

The weak export performance has also impacted on prices. The unit value index of Hong Kong exports grew by 2.0% in the second quarter of 2019, down from 2.2% growth in the first quarter of 2019.

Global economic activity continued to slow in the first half of 2019, thanks to a confluence of factors affecting many developed economies. Against this backdrop, the IMF revised its 2019 global growth forecast further downwards in July by 0.1 percentage point to 3.2%, the weakest rate of expansion since 2009. The IMF also downgraded its expectations of world economic growth for 2020 to 3.5%. In the advanced economies, economic growth is expected to slow, as the effects of the 2017 US tax reform fade and escalating tariff increases dampen US economic activity. For developing economies, economic growth is expected to remain relatively stable, despite trade conflicts and disruptive investment flows.

Among the developed economies, US economic growth slowed to 2.0% in the second quarter of 2019, following a surge in annualised GDP growth of 3.1% in the previous quarter. The deceleration in the second quarter primarily reflected downturns in inventory investment, exports, and capital investment. These downturns were partly offset by robust personal consumption expenditure and government spending. Amid slower economic growth, the US Federal Reserve cut its benchmark interest rate by a quarter of a percentage point in July 2019, its first cut in more than a decade.

The EU economy is expected to expand at a slower pace against the backdrop of the upcoming Brexit deadline and a rise in populist political agendas. The persistence of political uncertainties within the EU and global trade disruption will dampen EU economic growth, as highlighted by the ECB in its latest easing. The UK is scheduled to leave the EU on 31 October; however that outcome remains highly uncertain given opposition efforts to block the government from enacting a “no-deal” Brexit. In Italy, after 14 months in power, the populist coalition government formed by the Five Star Movement (M5S) and the far-right League party, has collapsed. The M5S is trying to form a new coalition government with the centre-left Democratic Party (PD). Again, this uncertainty is fostering political and economic instability which could spread beyond the country.

In Japan, a loose monetary policy will continue to be used to support economic growth, given weaker exports and investment growth as China-US trade tensions continue. In the face of labour shortages caused by Japan’s ageing population and shrinking workforce, the outlook may be buoyed by investments in labour-saving equipment and technology.

The upcoming 2019 Rugby World Cup and the 2020 Olympic Games are expected to drive increased investment in construction and a rise in income from tourism. Meanwhile, Japan and the US reached a broad trade deal covering agriculture, industrial tariffs and digital trade after the G7 summit in August. However, China-US trade tensions will continue to cast a shadow on Japan’s exports and investments outlook, while a scheduled consumption tax hike in October 2019 may dampen domestic demand.

China’s GDP grew by 6.2% in real terms in the second quarter of 2019, after growth of 6.4% in the previous quarter, which keeps the country in line with its growth target range of 6-6.5% for the year. However, many major indicators, including the manufacturing purchasing manager index, industrial output, fixed asset investment and retail sales, showed signs of a slowdown in the first seven months in 2019. As part of the strategy to re-balance the economy, private consumption will remain the main driver of growth, as underlined by reduced import tariffs on consumer goods. The Chinese government also reduced the business VAT rate in order to boost business confidence amid the slowing economy.

Growth in the ASEAN countries is expected to be moderate, due to weakening exports and private investment prospects courtesy of the China-US trade tensions. Relatively strong private consumption and accelerating infrastructure investment are likely to offset a downtrend in external demand. The Hong Kong-ASEAN Free Trade Agreement (HAFTA), which has partially been in force since June 2019, should strengthen Hong Kong’s trade connections with the region. The lingering China-US trade tensions, which have encouraged a diversion of trade and manufacturing facilities to ASEAN countries, will also lead to an increased flow of goods and investment.

The Latin American regional economy experienced a stalling recovery in 2019. Economic growth in Brazil witnessed a marked slowdown at the beginning of the year as business and investment wavered due to a lack of progress in economic reforms and political infighting. Mexico’s economy was weighed down by weak industrial production and investment. The United States-Mexico-Canada Agreement (USMCA) has been concluded but is currently awaiting approval by the US Congress.

Emerging European economies were also affected by weakening global demand, although the expansion of EU-funded projects may support investment growth in Central and Eastern Europe. In Russia, western sanctions, coupled with subdued energy prices, continue to cloud the economy.

The economic outlook for the Middle East seems relatively stable. Growth in the UAE is expected to be backed by investment in infrastructure and the construction of facilities for the Dubai Expo 2020. Saudi Arabia’s Vision 2030, which envisages economic and social reforms that may create more opportunities for the private sector, could be a positive factor in the future development of the country’s economy.

Hong Kong’s export outlook remains at the mercy of protectionism, as indicated by the manner in which it has been buffeted by the uncertainties caused by the China-US trade dispute. While monetary policy is expected to remain accommodating for major economies, continued geo-political friction could bring further uncertainties to trade and investment flows.

In the EU, recent political developments remain a major concern. The populist landscape ranges from the so-called yellow-vest protests in France to the emergence of the far-right Alternative for Germany and Italy’s anti-establishment Five Star Movement. Against softening economic growth and mild inflation, the European Central Bank (ECB) is launching a new series of quarterly targeted longer-term refinancing operations (TLTRO-III) in September. In addition, the ECB plans to restart purchases of government bonds by November in order to support the fragile eurozone economy. These measures may provide businesses with affordable credit and protect the EU economy from further downturns.

Heightened China-US trade tensions have had a negative impact on global trade and economic growth. While signs of tension reduction emerge recently, the threat of new rounds of punitive tariffs is still very much alive. On 1 September, the US levied a new 15% tariff on about US$110 billion worth of Chinese products, including clothing, food, household goods, Bluetooth headphones and televisions. In response, China imposed an additional 5-10% in retaliatory tariffs on some US$75 billion worth of US goods, including soybeans and crude oil. A second tranche of tariffs will take effect on 15 December, with the US imposing tariffs on all Chinese goods that have yet to be hit, and China resuming additional tariffs of 25% on US automobiles and 5% on auto parts and components.

With softening global demand, mounting trade tensions between China and the US, and a difficult operating environment, HKTDC Research has revised its 2019 Hong Kong’s export performance forecast downward from 2% to -4%. This revision takes into account the latest HKTDC Export Index survey, which found that 33.2% of Hong Kong exporters view the ongoing China-US trade dispute as their main concern with regard to any adverse impact on their activities. Other concerns include softening global demand (30.4%) and currency fluctuations (9.8%).

Looking ahead, Hong Kong exporters are becoming more pessimistic with regard to the possible consequences the China-US trade tensions could have on their businesses in the near-term. The proportion of exporters expecting negative effects rose from 54.7% in the second quarter of 2019 to 61% in the latest survey. A large majority, 71%, said they anticipated a drop in their total sales in 2019 as compared to 2018, while 20% expected no change and only 9% expected an increase. Furthermore, some 31% said they expected a drop of more than 10% in their total sales for 2019.