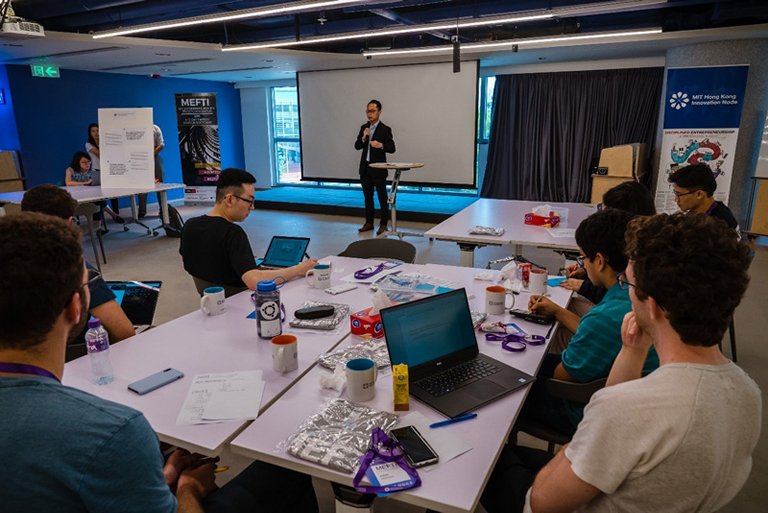 The Greater Bay Area: Educating a New Generation of Entrepreneurs

In a world filled with uncertainty, an ambitious programme run by one of the most famous seats of learning in the world is keeping the spirit of innovation and entrepreneurship alive in Hong Kong. The mission is to educate the next generation of global innovators by building a community of students, entrepreneurs, universities, businesses, and others, consistent with the its philosophy of Mens et Manus (Mind and Hand), for the benefit of all.

From its base in the city’s Kowloon Tong district, the Massachusetts Institute of Technology's (MIT) Hong Kong Innovation Node, is helping to incubate the next generation of innovators and entrepreneurs. Its vision is very much focused on the Greater Bay Area (GBA) initiative.

The GBA aims to closely link nine cities in Guangdong province with the Hong Kong and Macao Special Administrative Regions (SARs) to create an economic zone which will form a key component in the next phase of China’s economic development. The area covered by the initiative has a combined GDP of US$1.6 trillion.

Charleston Sin, the Executive Director of the MIT Hong Kong Innovation Node (the Node) explained why the operation, which has been running for almost four years, has chosen to focus on the GBA and why Hong Kong is the location for the operation he heads today.

Made by Hong Kong

Sin explained that MIT has long had a connection with Hong Kong, saying: “Shortly after the return of Hong Kong to Chinese sovereignty in 1997, the Hong Kong government commissioned MIT to produce a book entitled Made by Hong Kong. The research was carried out by a group of academics who came to the city; their job was to explore of the future of Hong Kong’s manufacturing industry.

“In a nutshell, their defining conclusion was that Hong Kong should be used as the marketing and international front, while Shenzhen and the Pearl River Delta area should be the manufacturing driving force.”

In effect, the book was the genesis of the Node and Hong Kong was chosen as its base over other potential locations in the Pearl River Delta region because the city has very strong ties to MIT, with a thriving and successful alumni base in the SAR.

Sin explained that the Node is funded entirely by alumni of MIT and friends of the famous Boston-based institution, saying: “We are a non-governmental organisation and received no funding from the Hong Kong government. We are resourced by MIT alumni and friends of MIT.

“Our aim is to build an attitude of innovation and entrepreneurship in the up and coming generation, in effect to educate and connect students to the opportunities available in Hong Kong and across the wider GBA.”

The Node has already been responsible for producing young entrepreneurs who have launched successful start-up companies.

A key component of the Node’s GBA strategy is an extensive and informative booklet published by the HONG KONG X-Tech Startup Platform (HKX) earlier this year which provides all the information needed to build a start-up company in the GBA, referred to with pride as ‘the bible’.

Sin said: “With a particular focus on the Qianhai Shenzhen-Hong Kong Modern Service Industry Co-operation Zone, it explains how to take advantage of all the government support available from both the mainland and Hong Kong governments. It also deals with certification, taxation and issues around building a business and innovation eco-system.”

Allied to this, the Node – MIT’s only fully dedicated operation outside of the US – carries out numerous activities to boost the innovative and entrepreneurial capabilities of MIT students, faculty, researchers, and alumni, in collaboration with the Hong Kong community. These include internship opportunities, educational programmes, engagement opportunities, innovation-focused events and factory visits across the Pearl River Delta.

Obvious Synergies for the GBA

By running so-called innovation and entrepreneur ‘boot camps’, involving students from MIT and institutions from high school to post-graduate in Hong Kong, the Node brings together design, engineering, computing, business and even law students. The boot camps end with sessions in which the students showcase the ideas they have developed.

Sin said: “Our focus is Hong Kong and the GBA. We believe that Shenzhen represents some of the best manufacturing and tooling capabilities in China. Many people who work in engineering believe it is the best place in the world in that sector.

“There are several areas on which we focus, one being the concept of smart cities. When I refer to ‘smart cities’ I am not talking about the controversial issue of smart lamp posts; we are focusing on the areas of inclusive growth, work of the future, smart living, and use of data to do better city planning.

“We are also focusing on fintech and healthtech, where MIT is very strong, and in which Hong Kong and the GBA need to grow and prosper. The synergies are obvious.”

As well as programmes to spread innovation and entrepreneurship, the Node also invites researchers and faculty members to Hong Kong to give talks and spread ideas to students.

Sin said: “We have a free-of-charge speaking programme, which has so far seen six sessions involving visiting academics and researchers. They talk about the research they are doing and what effects it can have. For example, we have had experts in research from robotics, mechanical engineering and cloud computing.”

As a forward-thinking academic institution, MIT is not shy when it comes to tackling the burning issues which face Hong Kong and mainland China today. In this respect, Sin was refreshingly frank, saying: “Given the situation in Hong Kong today, we are very much focusing on the youth. Right now we are undertaking studies to understand the situation young people in the city find themselves in by looking at areas like under-utilisation and what can be done to address such problems.” A part of this study is investigating the role small and medium-sized enterprises can play in building a brighter future.

In Sin’s experience, a significant number of students who begin courses with the Node are, at the outset, quite sceptical. He said: “We found that after taking part and visiting Shenzhen, for instance, they can see the possibilities that are out there and want to fully embrace them. In my humble opinion, Shenzhen is the most innovative city in China.”

Sin believes – and he says he has witnessed it first-hand – that a two-week course at the Node focusing on innovation and entrepreneurship offers not only teaching on those areas, but also gives young people hope for the future.

The sheer speed and scale of innovation in the GBA, particularly in Shenzhen, combined with a growing pool of innovation-savvy graduates from the operation’s boot camps, also gives Sin and his colleagues at the Node confidence for a bright future. He said: “Due to government support offered in the Shenzhen and Qianhai zones, the students and start-up youngsters have the space to innovate and don’t have fear of failure to hold them back. They can afford to fail.”

Sin also believes that with the correct strategy in teaching innovation, Hong Kong can catch up and offer the talent that the GBA needs to succeed. A measure the speed with which that success can be attained can be seen in Shenzhen. Sin said: “Perhaps I can put it like this: if we take Silicon Valley in the US, to innovate and develop a product or business takes maybe one year. In Shenzhen by comparison we are talking one month.”