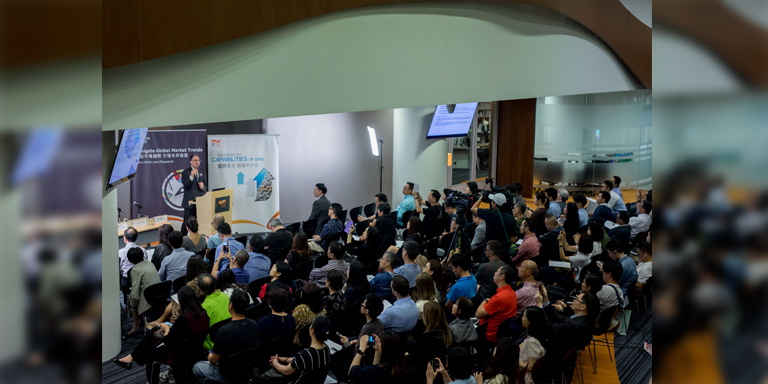 As the mainland-US dispute escalates and expands, a US lawyer specialising in customs-related issues advises businesses to be prepared as the issues may not be resolved quickly.

“All failure is failure to adapt, all success is successful adaptation.” This quote from innovation culture advocate Max McKeown will certainly chime with many business executives in Hong Kong and Mainland China. Their environment has become extremely and increasingly challenging as a result of the escalating trade dispute between the mainland and the United States.

The ongoing trade tensions between the mainland and the US have created uncertainties for local manufacturers. Even should a trade deal be agreed, some – if not all – US-imposed Section 301 tariffs on mainland imports could remain in place for a significant period. As the uncertainty continues, Hong Kong companies are being advised to adopt a total-solution approach to minimise the risks and optimise their business operations.

To provide business leaders with pointers on putting together such a solution, the Hong Kong Trade Development Council (HKTDC) organised a seminar titled: “ Prospering in a Time of Trade Tension: How to Ensure Your Business is Not a Trade War Casualty.” Andrew Shoyer, Partner, Global Arbitration, Trade and Advocacy, Energy, Sidley Austin LLP, offered practical tips and shared some of the customs strategies and export options open to Hong Kong companies to help them respond to the latest developments. Mr Shoyer has seven years’ experience working in the Office of the United States Trade Representative. The seminar was moderated by Louis Chan, Assistant Principal Economist (Global Research), HKTDC.

Mr Shoyer pointed out how quickly the dispute had escalated; United States Trade Representative investigations had begun in just 2017. Tariffs had been low for a long time, he said, as governments used other sources of revenue. This meant customs and border control was a little-followed area of law – until now. He advised taking a risk-based approach to the challenges posed by the escalation in trade restrictions between the US and the mainland. Traders needed to quantify their exposure and analyse the risk to their customer base, then put a compliance programme in place to reduce the risk – it would not be possible to eliminate risk.

The environment is changing rapidly, Mr Shoyer pointed out. He had just returned to Hong Kong from Washington DC only to learn that the administration of US President Donald Trump had issued an executive order to the commerce department to, within 150 days, implement regulations to identify and ban information and communications technologies (ICT) goods from adversaries. Unlike the recent run of tariffs, this was aimed at exports from the US, not imports into it.

He said importers are responsible for ensuring their goods comply with regulations. These range from the obvious such as paying duties to the less clear, such as third-party smuggling and sourcing from sanctioned territories. Penalties can be severe, including forfeiture, heavy fines and criminal penalties.

Customs and Border Protection (CBP) authorities looked at the entire value chain when determining where an item came from, he said. They check the supply chain for such issues as child labour or forced labour.

In relation to the US dispute with the mainland, three lists of goods had already been released under Section 301 legislation, and a possible fourth list would put tariffs on almost all the remaining US$300 billion worth of trade. It was not unlikely some, if not all of the tariffs would stay in place even if a settlement was reached.

Tariff classification governs the rate of duty on an item. Since the 301 tariffs on listed goods are levied at 25%, classification substantially impacts costs. Importers could seek a reclassification from CBP if they have strong grounds for reclassifying their imports, but need to conduct a thorough analysis before taking this step.

The valuation governs the tariff payable, since the levy is customs value multiplied by tariff rate (25%). Importers can reduce exposure by considering elements included in the customs value (components that were originally sourced from the US, for example). They can also consider using a “first sale” programme, where an importer in a multi-tiered transaction uses an invoice price from early in the transaction chain, so long as certain conditions are met.

Mr Shoyer said country of origin is defined as the country where an item last experienced substantial transformation – simply shifting final assembly or packaging would generally not be enough. This determination was not a simple task, he pointed out and exporters needed to consider the option carefully before deciding to move part of their operations to other production bases such as Mexico.

To change country of origin, manufacturers might move production to countries outside the mainland, especially considering the preferential tariff regimes offered to developing countries or under the network of US free trade agreements and other trade preference programmes such the Generalised System of Preferences (GSP).

In addition to the Section 301 Tariffs, national security (Section 232) provisions are available, where the president can restrict imports if they pose such a threat to the US. At present there are Section 232 investigations into imports of uranium, titanium sponge, and vehicles and vehicle parts. Companies need to factor Section 232 restrictions into their supply chain decisions. Importers might consider requesting exclusions but very few such requests have been granted.

Controls do not apply just to imports into the US – they also affect exports, and can have an impact on third-party trade.

The main US export controls concern weapons, and are governed by the International Traffic in Arms Regulations (ITAR), which oversees arms exports, and the Export Administration Regulations (EAR) which governs “dual use” items that can have military or civilian applications.

Items subject to EAR include US persons, wherever they are located around the world; items made in the US; items previously exported or transferred from the US; foreign-made commercial items that incorporate more than de minimis amounts of controlled US-origin content; foreign-made commercial items that are the “direct product” of certain controlled US-origin technology or software.

Exports subject to EAR are not confined to goods. They include software, technical information, and even assisting in design, development or manufacturing knowhow. Penalties for EAR violations include fines of up to US$1 million and 20 years’ imprisonment. Others could be loss of export privileges and exclusion from government contracting.

The Bureau of Industry and Security (BIS) maintains an “Unverified List” of businesses which they are not able to source enough information on. The BIS “Entity List” details foreign persons that are subject to specific license requirements for the export, re-export or transfer (in-country) of specified items. A BIS license is required for any export, re-export or transfer (in-country) of items specified on the BIS Entity List to listed persons.

Generally, the license requirement applies to all items subject to the EAR, and the license applications will be reviewed with a presumption of denial.

BIS has been tasked with identifying emerging and foundational technologies that should be subject to export controls. Those controls are likely to consist of licensing requirements for exports or re-exports to countries such as the mainland.

Strategies to consider include developing risk-based compliance programmes. Traders should review supply chains carefully, as well as the flow of engineers and other experts across borders who have access to US-origin technology that could be subject to export controls.

“Emerging” applies to cutting-edge technologies in such areas as artificial intelligence (AI) and fifth-generation mobile telecoms (5G). “Foundational” technologies are those which have a fundamental significance to a range of technologies – though Mr Shoyer pointed out this could, theoretically, apply to such well-established technologies as the wheel.

The US also applies restrictive sanctions to countries and individuals, Mr Shoyer pointed out. These include territory-based programmes which prohibit almost all trade, investment and other transactions with Crimea, Cuba, Iran, North Korea and Syria. There are also list-based programmes which target specific individuals and entities, including entities owned 50% or more by one or more Specially Designated Nationals, or (SDNs).

Partial restrictions target certain transactions with designated individuals and entities within defined industries such as oil production in Russia or by transaction type (such as dealings in certain Government of Venezuela bonds).

The US imposes secondary sanctions on non-US persons involved in certain transactions related to Iran, North Korea, Hezbollah, or Russia (and Venezuela).

The US Treasury Department's Office of Foreign Assets Control (OFAC) has prepared a risk matrix for businesses to judge the degree to which they are at risk of violating trade restrictions [https://www.treasury.gov/resource-center/sanctions/Documents/matrix.pdf].

Mr Shoyer advised businesses to put together a detailed compliance programme. This would include a written policy, continuous risk assessment, work instructions on such tasks as classifying goods and technology, screening all parties against lists and securing the required licences.

Staff also need training and awareness. When keeping records, business owners should bear in mind that the statute of limitations is generally five years. There should be periodic internal audits and monitoring, and business should have procedures in place to handle, remediate and correct problems.

Mr Chan suggested exporters submit written petitions in their own name, trade associations or through US importers for exclusions from both the List 3 tariffs which will soon open for application and the planned, US$300 billion list. He pointed out that according to the List 1 records, the success rate of applying for exemption is nearly 20%, which is one of the lower-cost options among many countermeasures.

Mr Chan said Hong Kong's exports to the US fell more than 8% year-on-year in the first quarter. If the Sino-US trade friction continues, it will unavoidably cloud Hong Kong's overall export performance in the second half of the year. Hong Kong businesses had accelerated the development of other markets way before the Sino-US trade friction began, however. Hong Kong’s exports to the ASEAN market in the first quarter amounted to more than that of the United States. “I believe Hong Kong businesses will be more willing to explore when the prospects for Sino-US trade remain unclear. In new markets, future ASEAN exports may compensate for the decline in US exports.”

To give Hong Kong businesses a better understanding of emerging markets such as ASEAN, the HKTDC will continue to organise visits to ASEAN countries to help Hong Kong firms expand business opportunities.

Listen to an edited version of Mr Shoyer’s presentation, in which he recommends a risk-based approach to dealing with the new trade barriers.