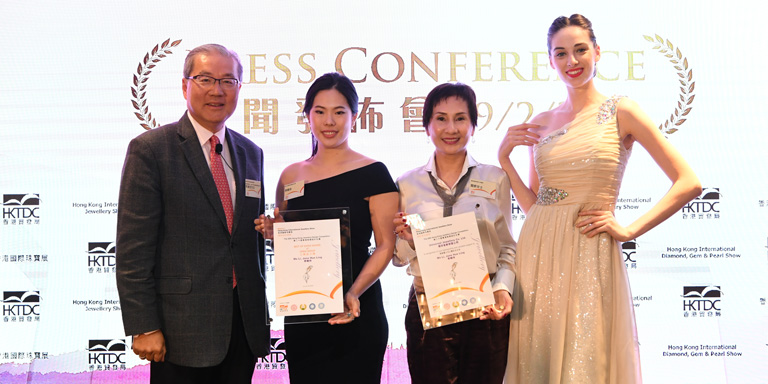 The 20th Hong Kong Jewellery Design Competition highlighted the skills of some of Hong Kong’s most talented young jewellers. Creative entries under the theme “Be Connected, Be United” included a school of fish assembled on a brooch, symbolising the power of unity, and a mix of Chinese and Western tableware miniatures set on a pair of earrings to represent cultural integration.

The latest edition received nearly 200 entries in two categories – the Open Group and Student Group. The panel comprised seven judges from various sectors, who evaluated the entries based on creativity and innovation; aesthetics, craftsmanship and wearability; topic relevance; and, for the Open Group, marketability. Winning entries for both groups were announced at a press conference held on 19 Feb to introduce this year’s HKTDC Hong Kong International Jewellery Show and HKTDC Hong Kong International Diamond, Gem & Pearl Show.

Three Best of Show awards were given in the Open Group. Jane Li’s entry, “We are ONE”, featured a school of swimming fish, symbolising the power of unity. The brooch used larger fish, with glittering diamond chips and coloured gemstones on their bodies coming to life like a group of smaller fish caught in the light. The entry won the Best of Show Award as well as the Craftsmanship and Technology Award, in recognition of Ms Li’s excellence in jewellery craftsmanship.

Ko Wing-yu, another Best of Show Award winner, emphasised unity in her entry, “Motivate”. Ms Ko noted that the Belt and Road Initiative had at its core the ideas of mutual effort, cooperation and benefits. Her design presented the idea that “unity is important for a country; gathered hearts are important for unity”. The entry played with the concept of rings, interlocking bands of red, blue and green gemstones with the diamond-studded central core of the ring, creating a highly dynamic design.

Chu Wai-on was the third Best of Show Award winner. Her earrings, “Enjoy”, had different designs for each ear. One side was platinum-coloured and featured miniatures of Chinese tableware such as teapots, bowls, plates, chopsticks and soup spoons. The other was rose gold-coloured, featuring Western tableware miniatures such as diamond shaped teapots, cups, plates, long spoons and forks. Blending Chinese and Western culinary elements signified how sincere cooperation can help to create a win-win situation.

Open to students of institutions registered in Hong Kong, the Student Group category aimed to inspire more young people and aspiring jewellery designers to join the industry. Cris Gao from the Hong Kong Baptist University’s School of Continuing Education was named Student Group Champion for her necklace design “Silk Road”, inspired by the classic Chinese blue-and-white porcelain exported along the Silk Road to Europe. Ms Gao’s entry combined a qipao collar with elegant blue-and-white porcelain patterns to highlight the beauty of the two heritages, demonstrating her creativity through a combination of rich materials.

The First Runner-up in the Student Group was Lam Yuet-wan from the School for Higher and Professional Education (SHAPE). She saw the Belt and Road Initiative as a bridge of friendship crossing mountains and seas to connect countries for trade and create unity and cooperation, bringing people from different countries closer together to start a new chapter for Mainland China and the world. Her ring design, “Bridge”, was inspired by a bridge structure, with the red gemstone in the centre symbolising a heart that represents power, unity and cohesion.

The Second Runner-up was Yeung Ling from the School for Higher and Professional Education (DILWL), whose brooch design “Satisfy” incorporated architectural elements. Her design materialised the concept of an economic pillar through geometric shapes, curves and straight lines. The dazzling gold, silver and blue geometric adornments in the form of stars and moons alongside the pillar symbolise how the growth potential offered by the Belt and Road Initiative drove through countries to create a stronger future for everyone.

The three Student Group winners all received cash prizes, while the three Open Group winners will be sponsored by the Hong Kong Japan Business Co-operation Committee to attend a five-day jewellery design study course in Japan. All the winning entries will be exhibited at the Hong Kong International Jewellery Show to promote Hong Kong’s unique designs to global jewellers and buyers.

Organised by the HKTDC, the 36thHKTDC Hong Kong International Jewellery Show will be held from 28 Feb to 4 March at the Hong Kong Convention and Exhibition Centre (HKCEC), while the sixth HKTDC Hong Kong International Diamond, Gem & Pearl Show will take place from 26 Feb to 2 March at AsiaWorld-Expo. The two shows will gather more than 4,600 exhibitors from 48 countries and regions, forming the world’s largest jewellery trading platform.