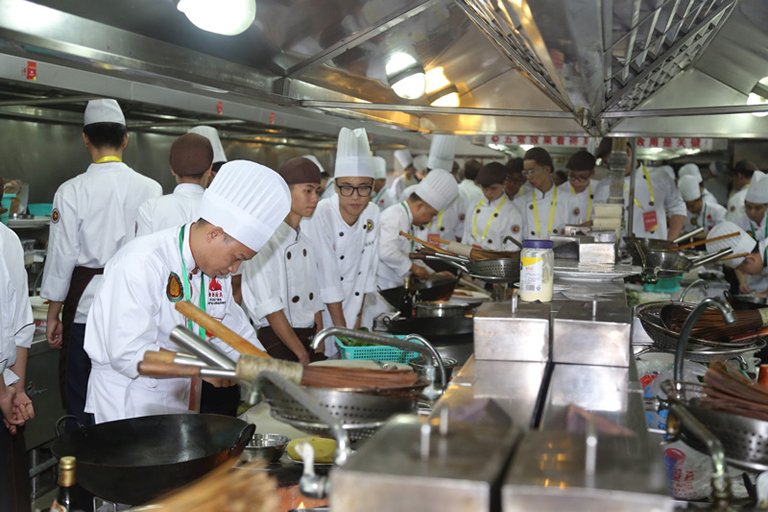 Interview with Qin Jianhong and Fu Bo, President and Secretary-General of the Guangzhou Restaurant and Catering Association

Established in 1995, the Guangzhou Restaurant and Catering Association is the most influential catering industry association in Guangzhou. It has served as a bridge between government and business operators since its inception and is instrumental in promoting the city’s catering trade and building up Guangzhou’s reputation as a gastronomic centre.

The association has organised and taken part in many global and national catering trade promotions and exchanges in recent years, and is involved in the selection of ‘China’s state-class restaurants’ and ‘Asian Games outstanding model catering enterprises’. Having served in the association for many years, its president Qin Jianhong and secretary-general Fu Bo have a deep understanding of the catering trade in Guangzhou and how it is developing.

However, figures in the past three years reveal that, although the catering sector has continued to expand, its annual growth rate has slowed to about 7%. Light meal restaurants and mass appeal catering have maintained a good momentum, while beverage and dessert shops are still doing extremely well, with growth at a rate exceeding 30%. High-end business dining has recovered from a drastic fall-off and has now begun to stabilise. But traditional fast food and noodle shops have seen a downturn.

Meanwhile, catering industry costs – such as salaries and rent - have continued rising. Restaurant employees’ salaries are growing on average by 15% a year, a much higher rate of growth than that of catering sales revenue. This is squeezing profits and making investors more cautious about opening new restaurants.

The culinary culture of Guangzhou is both conservative and inclusive. Cantonese cuisine is very different from those of other parts of China and the people of Guangdong are proud of it. Restaurants serving Cantonese cuisine remain an important pillar of the city’s catering sector. However, China is a vast country with many different food cultures, and different cuisines flourish side by side in Guangzhou. One of the newest entrants to the market in this city, for example, are the dishes of Sichuan which have become very popular with young people in Guangzhou.

Catering businesses in Guangzhou are meeting the challenge of competition from outside by beginning to undergo radical transformation. Many long-established Cantonese food companies have been working on diversification, multi-format operation and segmentation in recent years. Traditional big names in the business, such as the Bingsheng Group, Guangzhou Restaurant and South Sea Fishing Village, have all launched sub-brands by carefully choosing particular items of their famous dishes for single product marketing or opening new-style restaurants serving a fusion of Cantonese and other cuisines.

These new-style restaurants mostly target a young clientele by making changes to factors like the décor, the menu and the per capita cost. Most sub-brand restaurants are about 300-500 square metres in size. They have fewer private dining rooms and large tables as their focus is on smaller groups. They cater to young consumers with more modern dishes, tableware and interior design. By offering fine dishes in smaller portions, they are able to lower per capita spending to RMB80-100 and have successfully launched ‘small and niche’ brands of Cantonese dishes.

The speed of change in the catering market is increasing. New varieties and formats of restaurants are opening all the time. In big shopping malls in Guangzhou, restaurants are changing hands at a much faster pace than before, with ever faster changes in restaurant type. Some of the new restaurant types only have an average life span of two to three years. This is probably because over-expansion has led to homogeneous competition. Many new catering enterprises have opened more than 100 branches within a year or two in order to scale up overnight, and the lack of attention to the finesse of the dishes and the similarity of the different brands has resulted in vicious competition.

In spite of the moves to upgrade the consumption experience, many customers are still primarily looking for good, well-cooked food. Offering high quality dishes has always been the essential aim of the catering industry, and many catering businesses are now returning to the basics and taking much greater care when preparing to open a new outlet.

Fu Bo said he had noticed that many catering businesses are devoting more resources than before to research, brand marketing and designing new dishes. In particular, they are seeking perfection in food selection, condiments and ingredients when designing dishes for their menu. New brands can still make handsome profits without trying to achieve explosive growth. As Fu noted, more and more restaurants now have a monthly turnover of RMB1 million or more.

The Michelin Guide released its inaugural Guangzhou edition in July 2018, with eight restaurants earning the one-star distinction and many traditional delicacies named as Bib Gourmand recipients. However, no awards of two or three stars were made. Explaining that somewhat disappointing outcome, Qin Jianhong said that Guangzhou’s formal dining and western dining cultures still lag behind those of other first-tier cities such as Shanghai and Beijing. He added that Guangzhou restaurants do not pay enough attention to the wine list which Michelin values.

If Guangzhou is to reinforce its position as a gastronomic capital, it needs to improve its lines of communication with Michelin and other international certification bodies and reach a better understanding of international catering services. If this can be combined with Guangzhou’s strong catering capability, then the industry can achieve a truly world-class standard.

Guangdong Releases 2022 Plan for Supervision and Inspection of Food Production