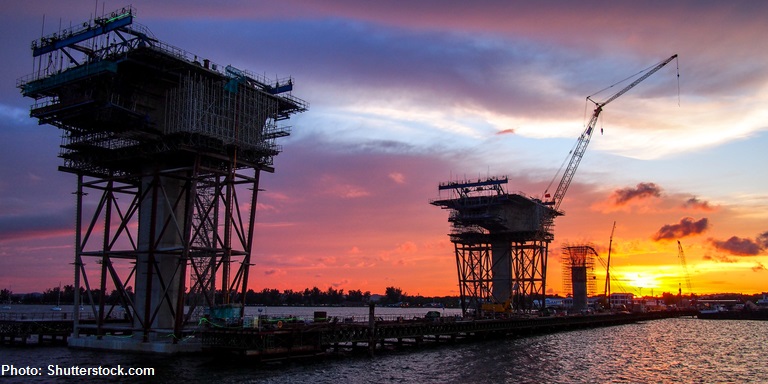 Brunei to Prosper from BRI-backed Refinery

US$15 billion China-invested refinery and petrochemical complex seen as essential part of the economic future of Brunei.

The news that work on a 2.7km bridge connecting Bandar Seri Begawan, the Brunei capital, with the neighbouring island of Pulau Muara Besar (PMB) had been completed late last month marked the successful conclusion of the country's first Belt and Road Initiative (BRI) project. It is, however, only one small element of the far wider-reaching China-backed development that will transform the island into one of the region's primary refining and petrochemical hubs.

Once completed, the US$15 billion refinery and petrochemical complex is expected to provide up to 10,000 jobs and play a crucial role in weaning the Brunei economy off its traditional dependence on its crude oil and natural gas exports. Although work on the bridge was led by the China Harbour Engineering Company, a Beijing-headquartered subsidiary of the huge China Communications Construction civil engineering conglomerate, the construction of the plant proper is down to the Hangzhou-based Zhejiang Hengyi Group (Hengyi). Under the terms of its agreement with the Brunei government, the company, one of China's largest suppliers of raw materials for the textile industry, funded the $3.4 billion facility and will be responsible for its day-to-day operations once it comes online late next year.

Another Chinese company, Lanzhou LS Heavy Equipment, a specialist in the provision of petrochemical systems, meanwhile, has been contracted to build a number of the refinery's key production units. These include an aromatics facility with a capacity of 1.5 million tonnes per annum and a 2.2 million TPY (throughput yield) hydrocracking unit. Overall, the refinery is shaping up to be both China's largest, privately-owned facility outside the mainland and, by far, the most expensive overseas-backed project in Brunei's history. Once operational, it will have the capacity to process 160,000 barrels a day, while also providing feedstock for Hengyi's terephthalic acid production, an intermediate material required to make polyester. It is also hoped that, in time, it will produce a sufficient level of fuel to allow Brunei to successfully compete with Singapore, currently the dominant regional oil hub.

Back in March, in order to finance the project, Hengyi Petrochemicals became the first company to issue BRI corporate bonds – a financial instrument newly approved by the China Securities Regulatory Commission – and successfully raised US$79 million on the Shenzhen Stock Exchange. It is money that the company is clearly going to need.

Earlier this year, it was announced that the second phase of the PMB project will cost some $12 billion. This will see the refinery's capacity expanded to 280,000 barrels a day and will also fund units capable of producing an annual TPY of 1.5 million tonnes of ethylene and two million tonnes of paraxylene.

The scale of the project is a sure indication of its importance to Brunei. Although the country is the second-richest per capita in the ASEAN bloc, after Singapore, low oil prices have seen its economy contract significantly over recent years, while also driving up the level of unemployment. Although, after four years of contraction, the country's economy rallied slightly last year with its GDP growth estimated at 1 per cent, it is still being faroutstripped by many of its fellow ASEAN states.

As well as the currently stalled oil prices, the country's oil and gas reverses – long its economic lifeline – are expected to be exhausted within 20 years. In anticipation of this, many of the global petrochemical companies have already cancelled plans for further investment in the country.

The PMB facility, then, is therefore clearly a key initiative and will help the country maximise profits from its dwindling reserves. At the same time, it will also nurture the capability and expertise required to service the increasing number of oil and gas fields coming online across the wider region.

Some institutions, however, are not hanging around to see if Brunei can successfully reboot its economy. Back in 2014, Citibank shuttered its branches and pulled out after 41 years in the country. A year later, HSBC followed its example, again ending its ties to the country. Widely seen at the time as swimming against the tide, the Bank of China opened its first Brunei branch in 2016. Given recent events and current forecasts, that might not have been quite the reckless move it seemed at the time.

According to the International Monetary Fund's recently published Regional Economic Outlook for Asia and the Pacific, the country's economy may expand by up to 8 per cent in 2019, maintaining average growth of 5 per cent for several years thereafter. Significantly, one of the cited reasons for this likely resumed growth was the imminent completion of the PMB facility.

Back in 2014, the two countries pledged to work together on the development of the Brunei-Guangxi Economic Corridor (BGEC) as a means of developing mutual trade, particularly with regard to halal products, tourism and shipping. Over recent years, the BGEC has been subsumed into the overall BRI project.

In terms of its BRI significance, Brunei also has the benefit of being set at the very heart of the Brunei-Indonesia-Malaysia-Philippines East-Asian Growth Area. Given the surging prosperity of this region, the BRI may allow Brunei to resume its classic role as a preeminent trading hub, boosting China's hopes of facilitating international trade to a scale never before seen.

China and Brunei have both staked a claim to the 370km-long Louisa Reef, one of the disputed areas of the South China Sea. It is now hoped that the close co-operation the two countries currently enjoy will allow them to jointly explore the reef's potential economic benefits, rather than remaining a continuing source of tension between the two.