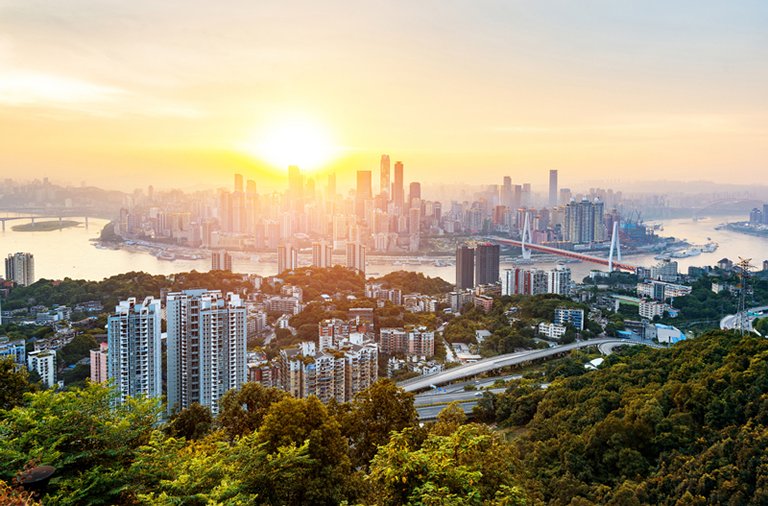 As China’s connecting hub between the Belt and Road Initiative (BRI) and the Yangtze Economic Belt, as well as the strategic stronghold for the Western Region Development, Chongqing has been striving to build up a logistics network in its surrounding areas. This will open up a trade gateway to countries in Continental Europe and the surrounding region for the benefit of China’s inland cities, particularly those in the western region. To this end, the Chongqing-Xinjiang-Europe International Railway (also known as Yuxinou) serves as a pioneer in the opening up of trade routes on the northwest front of Chongqing.

In recent years, Chongqing has been taking forward the China-Singapore (Chongqing) Demonstration Initiative on Strategic Connectivity (or Chongqing Connectivity Initiative) co-operation framework by actively developing a southward trade route and logistics passage. In pursuance of its role as the logistics and transport hub for the western region, the Yuxinou railway and the southern transport corridor connect in Chongqing. Chongqing is making efforts to develop a multi-modal freight transport system integrating rail, air, sea and road with the Yuxinou railway as the pivot. Through the Yuxinou railway and the southern transport corridor, the Silk Road Economic Belt will link with the 21st Century Maritime Silk Road.

The development of the Yuxinou railway is intended to open up the northwest trade route for Chongqing and build up China’s rail transport for trade exchanges with Europe and countries alongside. From the number of train runs, their running time, the geographical coverage as well as the cargo mix, it can be seen that the Yuxinou railway has already come a long way. Yet to shape Chongqing as a western region logistics hub, it cannot rely solely on the development of a single trade passage. In recent years, therefore, Chongqing has actively engaged in the development of a southward trade passage under the framework of the Chongqing Connectivity Initiative.

Concluded and commenced in 2015, the Chongqing Connectivity Initiative was the third co-operation project between China and Singapore. One of its focuses is to develop transportation logistics, with the aim of transforming Chongqing into a comprehensive connectivity transport hub for China’s western region through the promotion of a multi-modal freight transport system that integrates rail, air, sea and road transit modes.

The Chongqing Connectivity Initiative aims at opening up the southward trade logistics passage from Chongqing to Singapore and other Southeast Asian countries. It uses the logistics network of a southward rail-sea intermodal passage (the Chongqing-Guizhou-Guangxi-Singapore Rail-sea Intermodal Passage) and the southward cross-border road passage via the provinces of Sichuan, Guizhou and Guangxi.

The southward rail-sea intermodal passage is formed by the international rail-sea intermodal railway and the southward passage sea route, where the rail-sea intermodal railway connects Chongqing Rail Port and Beibu Gulf Port in Guangxi over a distance of some 1,450 km and a travel time of 48 hours. It came into regular two-way operation in 2017 and connects the sea-based transportation network at Beibu Gulf Port, where cargoes are exported to Southeast Asia, Australia and New Zealand by sea. According to the Modern Logistics Office of the Chongqing Commerce Commission, a total of 48 train runs were made from Chongqing to Guangxi via Guizhou in 2017.

The three main planned shuttle routes include the east route running from Nanpeng in Chongqing to Hanoi in Vietnam via Pingxiang in Guangxi, together with a secondary east route to Singapore via sea transit at Qinzhou Port; the central route to Bangkok in Thailand via Mohan in Yunnan and Vientiane in Laos; and the west route to Rangoon in Myanmar via Ruili in Yunnan.

According to Chongqing-ASEAN International Logistics Park, the Chongqing-ASEAN Regular Lorry service has not yet come into full operation. In particular, the west route is not yet open and the central route is only operating on a partial basis. Due to the lack of an optimal transport network, the central route presently only reaches Vientiane in Laos, where the lorry has to switch to the east route to complete the journey to Bangkok. As for the secondary east route, its planned Vietnam destination has been extended from Hanoi to Ho Chi Minh City in the south, allowing the route to cover nearly 80% of Vietnam.

From the commencement of operations to the end of 2017, the Chongqing-ASEAN Regular Lorry have made a total of 137 trips. In 2017 alone, 100 trips were reportedly completed, involving a total freight load of 1,027 tons and an aggregate cargo value of some RMB167 million. The goods in transit comprised building materials, glass products, auto parts and clothing, and mainly came from Chongqing, Sichuan, Gansu, Shanxi and Europe.

While the Yuxinou railway and southern transport corridor should help reinforce the logistics function of Chongqing, the city’s role as a comprehensive western region transport hub relies more on the connectivity of different logistics formats. At present, Chongqing is striving to develop a multi-modal transport system to provide a trade route that runs from the south to the north, linking up the Silk Road Economic Belt and the 21st Century Maritime Silk Road.

Located at the upper reaches of the Yangtze River, Chongqing serves as a connecting point between the BRI and the Yangtze Economic Belt. One element of its multi-modal freight transport system is the sea-rail intermodal transportation that links the Yuxinou railway and the ‘golden waterway’ of the Yangtze. Since the launch of the Yuxinou railway in 2011, its only start point has been located at Chongqing Western Logistics Park in Shapingba district. Its second start point came into being at the end of 2017 with the official opening of the Chongqing Guoyuan Port Rail Line. Since then, all cargo transported to Guoyuan Port via Yangtze no longer need to make a highway trip to connect to the Yuxinou railway at the Western Logistics Park. This signifies the seamless connection between the Yangtze golden waterway and the Yuxinou railway, which has helped to further reduce logistics and transportation costs as well as the time involved.

In terms of geographical location, Beibu Gulf at the Yangtze estuary is closer than Shanghai to other Southeast Asian countries. For example, a trip from Chongqing to Singapore by rail and sea will take 15 days less than by river and sea. Although the shipping cost involved in rail-sea intermodal transportation is similar to that of the river-sea format, it can significantly save on the transportation time from Chongqing to the major ports in the ASEAN bloc, thus reducing the time cost involved.

While the southern transport corridor has a shorter history than the Yangtze channel, its operation has undoubtedly opened up additional opportunities for the Yuxinou railway through its link in Chongqing, which only strengthens its BRI connectivity.

Taking the cross-border transportation service of the southbound highway as an example, the Chongqing-ASEAN Regular Lorry service has linked up with the Yuxinou railway on a regular basis since mid-2017. Through the rail-sea intermodal transport system, a trip along the southern transport corridor connecting the Yuxinou railway from Beibu Gulf port to Europe via Chongqing will take a total of 20 days only.

In the future, the multi-modal freight transport system, with the Yuxinou railway as the pivot, will be further optimised and extended. With Chongqing as its hub, the system can reach as far as the European continent to the north and all parts of the world by sea to the south.