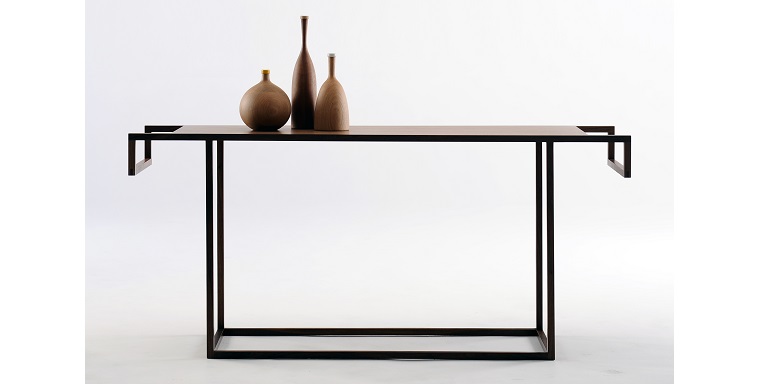 The mix of Eastern aesthetics with Western design ideals has long informed the work of award-winning British designer Samuel Chan. The Hong Kong-born designer holds 18 Design Guild Marks from the British Furniture Makers Guild, and in 2015, was named British Furniture Designer of the Year by industry peers, who praised his ability to “make wood sing.” Mr Chan returned to Hong Kong in December to speak at the Business of Design Week and Asia Society, about his craft.

What led you to furniture design?
As a young boy I was always looking at objects, working out how they were made or could be improved. My family moved from Hong Kong to London when I was 14, and was enrolled in an English school. In those days woodwork, metalwork and technical drawing were part of every schoolboy’s curriculum, and those were the subjects I loved. The person who first suggested that I might make a career of design was my woodworking master at school – Harry Knock. He was a wonderful teacher in every sense. I took his advice and spent some seven years training to be a furniture designer. Mr Knock is in his nineties now. I still see him from time to time, and named a recent collection after him.

How would you describe your design philosophy?
I have stuck to certain design principles: pure, clean lines; carefully worked out proportions; the importance of woodcraft. The design historians Charlotte and Peter Fiell gave the title Design Purity and Craft Principles to the book they wrote about me, and that’s a good summary of what I try to maintain. Many people see an Eastern sensibility in my work, and usually they are referring to the visual simplicity and lightness of my pieces. But while there are certain details in Chinese furniture-making that I have deliberately experimented with, apart from that, the Eastern influence is not something I’m too aware of. My British design education is something I’m very conscious of. The teaching of design and craft is a long-established and excellent tradition in the United Kingdom. It taught me to be rigorous in every part of the making process – at the drawing board and in the workshop.

Why did you decide to set up your company, Channels?
After I obtained my master’s degree, I worked for an interior design firm that specialised in luxury hotels. I spent long hours developing furniture for those projects, which almost always specified classical furniture. It was a great training ground, but I really wanted to get back into contemporary design. In 1995, my wife, Shirley and I decided to give it a go. We found an old upholstery workshop in Chelsea, and Shirley, who’s an architect, turned it into our showroom-studio. I went up to the Midlands to find Mike France, the furniture maker who’d made my degree show pieces, and persuaded him to head a workshop for me. We opened our doors in October 1995 offering two collections of furniture and a bespoke service. Twenty-two years later, I still design at least one new collection every year and take private commissions. Engaging with clients to create what they want remains an important part of our creativity.

You have since set up an offshoot business, Joined + Jointed. How is it different from Channels?
Channels is my own studio. The designs that come out of it are entirely my own, and there is a big emphasis on bespoke design. By contrast, Joined + Jointed offers a standard collection of well-designed, well-made pieces at accessible prices. As the name suggests, Joined + Jointed is not just me but a collective of eight designers. I set it up in 2013 after coming to terms with the fact that customers are now comfortable with buying furniture online. But much of what I saw online focused on offering impossibly low prices without thought to quality or longevity. I was convinced we could do better, so I invited a group of designers – all of whom I’d long admired – to contribute to creating a collection of original design, made with craft values but in batch. It’s a constant challenge to deliver high-quality products at competitive prices, but with our own manufacturing, we are well-placed to do it.

Tell us about some of your projects in the Chinese mainland.
To date, my biggest project in China has been the Jumeirah Himalayas Hotel in Shanghai. It was a unique opportunity. The owner of the property saw my work and gave me a pretty open brief to design and make all the furniture in the public areas and guestrooms. The building itself was designed by the Japanese master architect – Arata Isozaki. It’s a remarkable landmark on the Pudong and I was glad to be a part of it. I’ve also designed for a number of private residences, and most recently for the British Ambassador’s residence in Beijing.

The China market still looks to established, European design houses but is increasingly confident in Chinese talent and its ability to deliver quality, and I think that tendency will grow.

With the growing demand for design and bespoke products in Asia, do you see Channels as a good fit for Asia, particularly China?
Yes, I hope that will increasingly be the case. This year I’ve enjoyed working on several show apartments in Hong Kong, getting to grips with the owners’ vision for their properties. The fact that they approached me was encouraging. Not so long ago, show apartments in Hong Kong featured more ostentatious furniture schemes. I think there is also a growing awareness of, and pride in Chinese representation in the creative industries. The China market still looks to established, European design houses but is increasingly confident in Chinese talent and its ability to deliver quality, and I think that tendency will grow.

Apart from Lane Crawford, are there plans to further expand in Hong Kong?
I’ve worked quietly in Hong Kong for many years on design commissions from private individuals and several institutions. Lane Crawford is our first major retail partner and we are pleased with how that’s going. It’s interesting to see what pieces capture the imagination in this city, such as the “Shoe Tree” (a sculptural piece that stores 12 pairs of shoes in handmade wood shoe boxes). This collaboration with London-based shoe designer Beatrix Ong is doing very well through Lane Crawford. For the future, there are several possible avenues for us in Hong Kong with both Channels and Joined + Jointed. But right now the UK and Europe are still taking up the majority of my time, and I’d only want to start something else in Hong Kong if I can devote the time and effort to doing it well. We have always grown the business slowly, organically. Many of the business opportunities were not intentional, but came from encounters we’ve had with people we like and want to work with, and I’d prefer to keep it that way.

As an award-winning designer, what is your advice to budding designers about pursuing their passion?
Firstly, I’d say if it really is your passion then you should be able to work hard at it. However talented you are, be prepared to work hard, especially if you decide to set up your own business. Secondly, I’d say get off your computer. We sometimes take interns in our London studio, and the standard way of research these days is Internet-based. Let’s say you’re looking for inspiration for a chair – going online and looking at hundreds of chair photos is not inspiration. That’s just looking at other people’s work. Inspiration should be natural and organic. To be original, you have to make the effort to find your own inspiration out in the world.