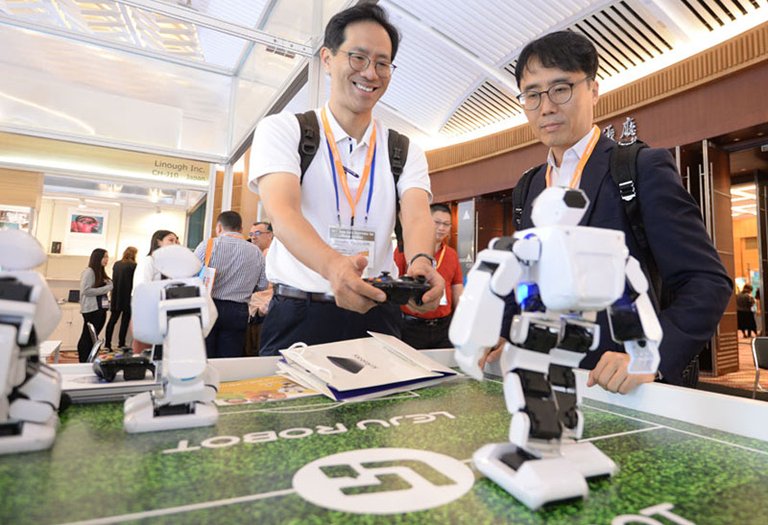 The improving sentiment of the electronics market in 2017 appears set to be a continuing trend next year, according to buyers and exhibitors surveyed during the HKTDC Hong Kong Electronics Fair 2017 (Autumn Edition). Overseas markets have started to pick up, with a substantial improvement in confidence in both traditional markets and emerging markets. Asian markets, including the ASEAN countries and the Chinese mainland, are expected to perform exceptionally well in the coming year.

Product-wise, electronic/electrical accessories are set to shine in 2018. The market potential of robotics and AR/VR products, especially for entertainment purposes, looks promising over the next two years, while smart home applications remain popular too.

The HKTDC Hong Kong Electronics Fair 2017 (Autumn Edition) was held from 13-16 October, 2017. HKTDC Research collected opinions from 664 buyers and 361 exhibitors attending the event. The industry players were asked about their expectations for the electronics market and about product trends for the coming year.

Market Set to Improve Further in 2018

Prospects for the electronics market in 2018 look promising, with a majority of respondents expecting an increase in overall sales. In total, 97% of buyers and 92% of exhibitors expected their sales to rise or remain unchanged in the near future, an increase on the 89% and 87% who held those opinions at the last Electronics Fair in April 2017. Buyers were generally more optimistic than exhibitors about the market outlook in the near future. More than half (60%) of buyers surveyed expected a positive sales growth for 2018, up from 38% in April 2017, while a little under half (45%) of exhibitors surveyed held the same opinion. Only 3% of buyers and 8% of exhibitors expected a decrease in overall sales for the coming year, a fall from the 11% and 13% who were worried about such an outcome in April 2017.

Regarding the prospects for each individual market, a substantial improvement in confidence was observed for all major overseas markets across the globe. Among Hong Kong’s traditional export markets, Taiwan and Australia and the Pacific Islands have recovered from the doom and gloom to be the two markets with the best growth prospects in 2018, according to the vast majority of buyers and exhibitors who are active in those markets. Overall, 85% of respondents thought Taiwan was “promising” or “very promising”, while 82% thought the same about the Australian and Pacific Islands market. Among the emerging markets, 92% of respondents were positive about the growth prospects of the ASEAN countries and 91% felt similarly about mainland China.

Electronic/electrical accessories continue to be the focus of the market for 2018. Some 30% of respondents agreed that electronic/electrical accessories will have the highest sales growth in the coming year, up from the 20% who held that opinion at the last Fair in April 2017. Other items highlighted by a significant proportion of the respondents included audio-visual products (12%), computer and peripherals (11%), digital imaging (10%), home appliances (8%) and electronic gaming (8%). However, the sales growth of the more advanced electronics products, such as IoT applications, 3D printers, robotics and unmanned tech, and office automation and equipment, may lag behind that of the consumer electronics, according to industry players.

Entertainment electronics may be the key to success in the advanced technology sector – including robotics and AR/VR applications – over the next two years, according to industry players.

A large majority of respondents (70%) described the overall market demand for robotics as “promising” or “very promising”. Regarding the applications of robotics, just over half of the respondents (51%) agreed that robotics for entertainment purposes (such as toys and social robots) will have the greatest market potential over the next two years. More than a third (36%), however, believed that retail services applications, such as customer services and catering services, represented the most promising market, while a similar proportion (35%) thought the same of home appliances, such as vacuum cleaning and household robots. Other robotics applications picked out by a substantial number of respondents included medical applications, such as surgical and rehabilitation treatment (27%), and educational purposes, including STEM education and training services (18%).

Apart from robotics, the market for AR/VR products is also looking favourable for the next two years. In line with this, 81% of respondents said they regard the market demand for AR/VR products as “promising” or “very promising”, compared to 72% who held that opinion in October 2016. Audio-visual entertainment (56%) remains the most promising application for AR/VR technology, closely followed by mobile/on-line games (55%) – more than half of respondents marked these two applications out as having strong market potential. Other applications highlighted by a sizable percentage of respondents are entertainment purposes other than audio-visual (18%), and other applications for mobile apps (18%).

Smart home/smart living products is another category worth noting. Favourable opinions about the market potential of the most common smart home applications have increased across the board. Audio-visual items with smart functions was the most popular application among the respondents, with 84% saying it will have the greatest market potential over the next two years, closely followed by wireless charging devices for smart appliances (81%), wireless system items for connection with the internet/mobile network (77%) and smart devices for energy management/saving purposes (76%).

As regards price, industry players agreed that consumers were willing to pay a premium for the smart home features of the consumer electronic products and household appliances. Most respondents (73%) believed consumers would be willing to pay 1%-20% more for smart home applications, while 18% thought the premium could be even higher.

Buyers were asked to rate their level of satisfaction with the performance of Hong Kong’s electronics products suppliers on a scale of 1 (“very dissatisfied”) to 5 (“very satisfied”). The areas they were happiest with were compliance with safety regulations/standards and environmental regulations/standards, which achieved average scores of 4.21 and 4.17 respectively. Other outstanding areas are quality (4.14), services (4.10) and function (4.09). The area they are least satisfied with is price, which is rated at 3.8. Hong Kong suppliers might also consider making more of an effort to drive innovation.

Overall, the performance of Hong Kong’s electronics products suppliers is rated as very satisfying. Buyers’ level of satisfaction has seen improvements in all areas of evaluation, when compared to the results of the survey held during the last Electronics Fair in April 2017.