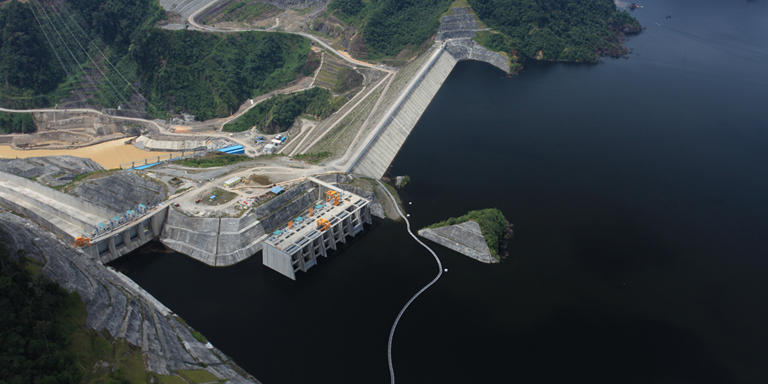 Bridging the Belt and Road

Malaysia’s hydropower and roadway investments fit with the overall aims of China’s Belt and Road Initiative.

Speculation about Malaysia's future economic priorities have frequently focused on the country's oil and gas reserves, palm oil production, high-tech manufacturing, real estate and, of course, tourism. While its potential strengths in the hydropower sector have remained largely overlooked, two high-profile dam projects may be about to change that, with Sarawak's long-mooted Corridor of Renewable Energy now set to become a reality.

Last month, Sarawak Energy Berhad, the power generation company owned and operated by the state government of Sarawak, completed its purchase of the 2,400 megawatt Bakun Dam from Malaysia's Ministry of Finance. The company paid RM2.5 billion in cash, with a further RM6 billion in loan facilities, to take possession of one of Southeast Asia's most significant – and controversial – power projects. Work on the dam was originally completed in 2010, but the site did not come fully operational until July 2014.

In a further development, construction is expected to start of the 1,285 megawatt Baleh Hydroelectric Facility in October 2018. The project is jointly undertaken by the China Gezhouba Group, the Wuhan-based construction and engineering giant, and Untang Jaya, a Sarawak-based construction company.

Once completed, Baleh will be the fourth hydroelectric installation to have been coopted into Sarawak's Corridor of Renewable Energy, an initiative launched in 2008 on Borneo, an island jointly administered by Malaysia, Indonesia and Brunei. This will see it line up alongside the Bakun Dam, the 944 megawatt Murum Dam and the 100 megawatt Batang Ai Dam.

The completion of the Bakun deal means the Sarawak government, together with its Sarawak Energy subsidiary, now owns all of the state's electricity-generation facilities, granting it considerable leverage over the future direction of other local infrastructure projects. This will include the proposed redevelopment of the Bakun Lake region into a prime tourism destination, complete with a range of new hotels and resorts.

Another project with clear links to the Sarawak Corridor of Renewable Energy is a proposed coastal highway. At present, up to 80 per cent of its construction costs are expected to be covered by Chinese investment in line with the overall objectives of the Belt and Road Initiative. Considered a huge undertaking, the project would entail the construction of several bridges, as well as substantial upgrades to roadways in the more rural and forested areas.

Should it get the go-ahead, the coastal highway would be the latest of the country's array of ambitious transport infrastructure projects. Indeed, work is already underway on the RM16.5 billion, 1,073-kilometre Pan-Borneo Highway, a Malaysian government-backed initiative intended to link the country's two Borneo-based states, Sarawak and Sabah. It could also evenually connect to Brunei via the 30-kilometre Temburong Bridge. Currently under construction by the China State Construction Engineering Corp, the bridge is scheduled for completion in late 2019.

The first 786-kilometre long phase of the Pan-Borneo Highway is due to be finished in 2022. Once completed, the road is expected to stimulate further investment in infrastructure, public transport, telecoms networks and public-health facilities across the vast tranches of Malaysia's rugged, underdeveloped terrain that the highway extends across.

For its part, the Sarawak government says that its bid to take overall control of the state's renewable-energy resources is in line with a long-term ambition to transform the region into a digital-communications hub. It has already pledged to invest RM2 billion over the next five years in installing fibre-optic cables and satellite connectivity across the state in order to jump-start the local digital economy. The move is part of a wider agenda intended to rebalance the economy and shift away from its traditional reliance on oil and gas, mining, agriculture and forestry.

"Bakun and the other hydroelectric projects will play a strategic role in powering the digital economy,” said Sarawak’s Chief Minister Datuk Amar Abang Johari Tun Openg. “We believe that the integrated management of the local hydropower facilities will help attract many of the global digital giants to Sarawak."