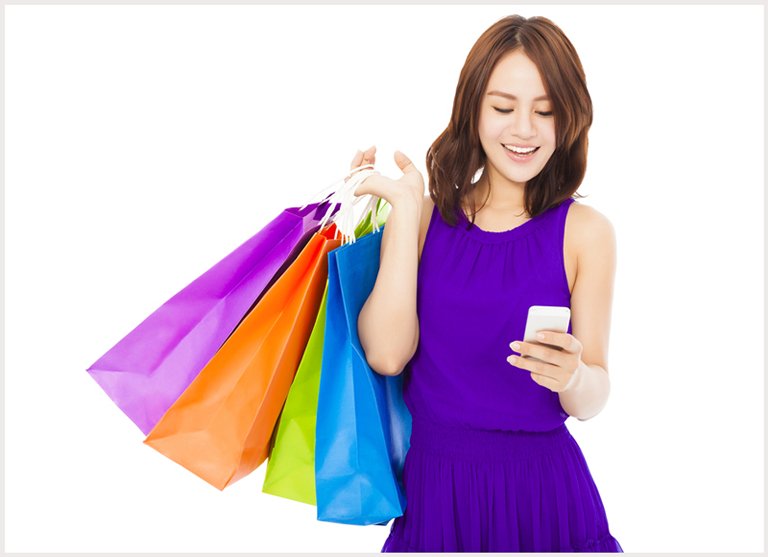 In recent years, both the uptake and frequency of online shopping and overseas online shopping by China’s middle-class consumers have been climbing significantly. According to a survey on the mainland middle class carried out by the Hong Kong Trade Development Council (HKTDC) [1], these consumers shop online about 5.25 times a month on average, with 73% of the respondents shopping online at least once a week. Smartphone apps are used to place orders online much more than computer browsers, which suggests that consumers have already developed the habit of using smartphones to create their “mobile lifestyle platform”. 53% of the respondents remarked that sharing on social media could trigger their impulse to buy, while only 15% said they would not be persuaded by the promotional gimmicks used by shopping websites to buy goods outside their purchase plans.

China’s online shopping market is growing in leaps and bounds. According to figures released by the National Bureau of Statistics, nationwide online retail sales rose from RMB1,303 billion in 2012 to RMB5,155.6 billion in 2016. Its share of total retail sales of consumer goods climbed from 6.2% in 2012 to 15.5% in 2016.

At the focus groups, participants made the following remarks:

“There are many designer brand fashions online, including D2C, Shangpinhui etc. Taobao has also created ‘Quality by China’ launching independent designer fashions with unique characteristics. Shoppers can buy clothes which are not often found in shopping malls which can save them the embarrassment of wearing the same clothes as other people.”

To these consumers, the internet has already evolved from a “tool” to a “lifestyle”. This is due not only to the proliferation of various kinds of mobile phone apps, but also to the mature development of online payment systems such as Alipay, WeChat Pay and JD Baitiao. All these apps have set the internet free from desktop computers and created a “mobile lifestyle platform” for smartphone users.

Both the consumer focus groups and questionnaire survey show that the “online lifestyle” is already commonplace among consumers on the mainland. Many daily activities, such as eating, drinking, entertainment, travelling and shopping, can be carried out via mobile apps, while consumer attitude has also shifted from “skeptical” to “ready to try”, to “getting used to it”. Consumers tend to find shopping online stress-free because it allows them to pick and choose at their own pace and in a relaxed manner. Business operators are finding that designing their webpages so as to attract consumers attracted by this aspect of online shopping is becoming an increasingly demanding task.

It was found at the focus group discussions that the “palm-top lifestyle” has already become the norm for many consumers. Through various mobile apps and shopping platforms, it has become increasingly convenient for consumers to buy all kinds of products and services. Middle-class consumers are increasingly opting for online shopping to purchase medium-end to high-end products as it offers convenience as well as door-to-door delivery.

At the focus groups, participants made the following comments:

“Nowadays many apps compare prices and recommend discounts to users.”

“Many food ordering apps allow users to order food even from faraway restaurants. Although it takes a bit more time, it offers many more choices.”

“To dine out at a restaurant, one can make reservation by apps. You can hang around in the neighbourhood before going to the restaurant at the appointed time.”

“In the past when (I) rented apartments (I) often came across undesirable units asking for high rents and yet the environment was rather poor. Later on (I) used home leasing apps which would screen the units before putting them online. This has not only spared (me) the pain of going through an intermediary, but also saved (me) more than RMB1,000 in rent a year through getting ‘red packets’ by posting likes.”

According to the findings of the questionnaire survey, when consumers make purchases at shopping sites, they are easily lured by special offers to buy products outside their intended purchases. 48% of respondents said that in order to take advantage of coupons offered by shopping sites or price cuts on designated products, they would choose other products in addition to their intended purchases. 42% said they would buy products outside their planned purchases in order to bring their total order up to the amount entitled to free delivery. The survey also found that only 15% of the respondents indicated that they would not be lured by promotional gimmicks offered by shopping sites.

The survey shows that female consumers are more easily encouraged to buy products outside their planned purchases by the promotional gimmicks of online stores. 48% of female respondents would buy products outside their planned purchases in order to qualify for free delivery, a percentage markedly higher than the 36% of their male counterparts. 38% of female respondents are attracted by “guess what you like” products offered by shopping sites while only 32% of the male respondents respond to such promotions. However, it is interesting to note that just 18% of the male respondents said they would only buy the brands and products that they had planned to do – only 11% of their female counterparts would do similar.

The most important reason given for installing a new app is that it is popular and widely used. 62% of respondents put this as their primary motive. Female respondents are more likely to install new mobile apps to take advantage of special offers, while replacing old apps with better versions is more often given as a reason for installation by males.

The “mobile lifestyle platform” is the force driving WeChat Moments to becoming the main channel used by mainland middle class to connect with friends. The survey finds that although 66% of respondents would still share and exchange latest ideas and life experiences with friends in the form of “face-to-face gathering”, only 15% said this is the most frequently-used method of communication with friends. 77% said WeChat Moments was their most frequently-used form of communication.

According to the consumer focus group discussions, exchanging and sharing latest ideas and life experiences via WeChat Moments is the most efficient way of disseminating information. Respondents made comments such as:

“Moments is the best channel for me to discover new restaurants because (the information) is shared by people (I) know after they have tried, so there is no bluffing.”

As the information shared on WeChat Moments comes from friends, it is considered more reliable. It travels fast and reaches target audiences. Such information sharing encourages and attracts people to modulate their behaviour and, in turn, can change and stimulate their consumption mentality very effectively. This is particularly the case in some inner circle WeChat groups with a high frequency of communication, where exchanges between people can be non-stop. Information on what products and services are good or bad can be passed around very quickly, increasing the pressure to buy - or indeed the resistance against buying.

Sharing on Social Media Can Trigger Impulse to Buy

Social media allows middle-class consumers to express their choices better and position themselves so that friends around can understand them more easily. According to the survey, 66% of respondents agreed with the statement that “I would share my views or daily life experiences so that my friends can understand me better”. The proportion of respondents with a monthly household income of over RMB40,000 agreeing with this statement is as high as 73%.

53% of the respondents agreed that “the information shared by friends can trigger my impulse to buy”. The percentages of female respondents and those on high monthly incomes agreeing with that statement are even higher, at 58% and 62% respectively. In view of this, making good use of social media in promotion and disseminating the right information to target customer groups is a promotion and brand- building strategy that should not be overlooked.

How to integrate online and offline sales channels has become a marketing strategy demanding the attention of industry players. When asked which forms of O2O have been used in making purchases, 58% of respondents said that they had tried “choosing/experiencing at physical store first before buying online”, while 55% said they had tried “choosing the right product online and experiencing it at physical stores before going back online to buy”. This suggests that most of the respondents using these O2O forms will eventually make their purchases online.

It was found at the focus groups that consumers have developed the habit of visiting physical stores even after shopping online. If no discounts are offered at the physical store, they will look and try out products there but will mostly not buy there. Then they will go online to search and buy products that offer discounts, products available in overseas purchasing, or similar products. In view of this, “advertising and brand promotion” is becoming an increasingly important role for physical branded stores.

This has important repercussions for the nature of such physical stores. In order to attract consumers to visit them more frequently, they must pay more attention to their business format. For instance, “shops using special themes” and “supermarkets focusing on a particular sector” are the most popular business formats, both of which managed to attract 53% of the survey’s respondents to visit them more frequently.

As the internet lifestyle continues to be a growing trend, offline experiential stores must perform the functions of establishing brand image, advancing brand promotion and providing services in addition to conducting sales. With middle-class consumers becoming increasingly choosy, ordinary shops are finding that they can no longer satisfy their requirements. Business operators should devote effort into turning their bricks-and-mortar stores into venues offering unique experiences with characteristics and a story to tell. The development and design of physical stores should place emphasis on special features and target specific consumer groups.

Online shopping sites are set to become important sales channels. However, the strategy they adopt in order to attract target customers is totally different to that employed by conventional physical shops. As online products become increasingly diverse, strategies such as targeted promotions aimed at specific customer groups, effective analysis of product demands, active interaction with social networking groups, as well as detailed product information, can help to offer better services to target customers.

Apart from trying to discover the general characteristics of middle-class consumption behaviour, the present survey also explores the impact China’s 13th Five-Year Plan has on middle-class consumption and way of life. One of the policy directions of the Plan is promoting new consumption patterns, which includes encouraging the consumption of green, fashionable and quality products, encouraging the development of custom-made services to meet the demand for personalisation, expanding service consumption, and advancing online/offline integration. Moreover, to take into account the post-80s consumers, who grew up in times when China experienced substantial economic growth and whose upbringing is very different from that of their parents, efforts were made in this survey to reflect their consumption characteristics.

The survey was carried out in January 2017 in eight mainland cities where a total of 2,000 consumers were polled by online questionnaire. Before conducting the questionnaire survey, six consumer focus group discussions were held in Shanghai, Wuhan and Chengdu (two in each city). The objective of the focus group discussions is to further understand the spending mentality of mainland consumers by way of qualitative analysis.