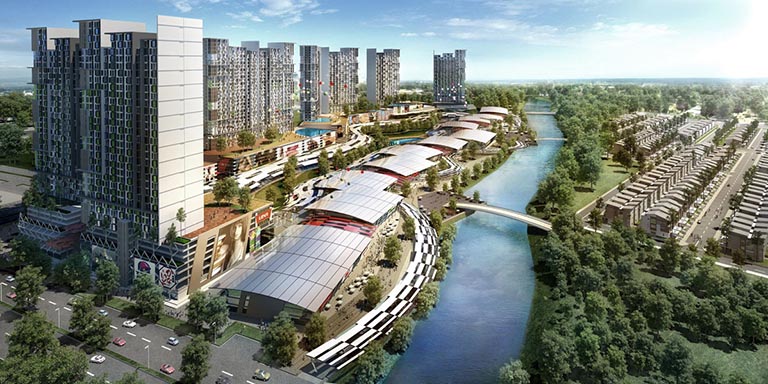 Belt and Road investment priorities and boosting the northern states are fuelling expansion of the country’s Special Economic Zones.

The development of Malaysia's growing number of Special Economic Zones (SEZs) is being shaped by several investment requirements related to the Belt and Road Initiative, as well as by a change in government priorities.

As the Malaysian government seeks to diversify the country's economy, it faces three key challenges that all have implications for the SEZ sector. It is keen to rebalance economic growth across the country while looking to nurture innovation in the digital-technology sector. It is also determined to capitalise on new opportunities emerging from the ASEAN integration programme.

With inward investment focused almost exclusively on Kuala Lumpur and the southern states of Selangor and Johor, promoting interest in the country's northern regions is considered vital to rebalancing the economic map. The project centerpiece is the development of the East Coast Economic Region (ECER), an initiative that was initially given the go-ahead in 2008.

As envisaged, the ECER spans the northern states of Kelantan and Terengganu, as well as Pahang in the east and Mersing in southeastern Johor. It extends across 51 per cent of Peninsular Malaysia, and focuses primarily on the country's traditional strengths in manufacturing, agribusiness, oil, gas, petrochemicals and tourism.

As of May 2016, some 38.5 per cent (US$3.1 billion) of all inbound investment in the ECER had been sourced from Chinese investors. The majority of this funding has been channelled into the Malaysia-China Kuantan Industrial Park. Set in the eastern coastal state of Pahang, this was the first industrial park in the country to be jointly developed by Malaysia and China. Among the more recent investments has been the funding of a US$133 million aluminum component manufacturing facility by the Guangxi Investment Group.

To create much-needed jobs, however, the northern states require considerably more investment. In line with this, the Terengganu state government in 2016 lobbied to launch a new SEZ extending across Besut, Setiu, Kuala Nerus, Kuala Terengganu and Marang. The proposed 729,400-hectare development is said to have been modelled on the Shenzhen SEZ in southern China. Under the plan, the initial phase will use some 221,000 hectares, with the second phase requiring an additional 508,400 hectares.

With improving the country's digital infrastructure one of the key elements in the government's plan to encourage multinationals and SMEs to create new jobs, Malaysia launched the world's first Digital Free Trade Zone (DFTZ) in March this year. The ceremony to mark the formal adoption of the scheme was attended by Malaysian Prime Minister Najib Razak and Jack Ma, the Executive Chairman of Alibaba Group and an adviser on the development of Malaysia's digital economy.

Once completed, the DFTZ will boast an e-fulfilment hub at the Kuala Lumpur International Airport (KLIA) Aeropolis, a 405-hectare development zone focused on air cargo and logistics as well as the development of an aerospace/aviation cluster. The initial phase will roll out later this year, with Alibaba, Cainiao, Lazada and POS Malaysia already signed up as tenants. The facility will also be the launch site in 2019 for Alibaba's Electronic World Trade Platform – part of the company's bid to streamline global trade arrangements for SMEs.

The second phase of the DFTZ will see the establishment of the Kuala Lumpur Internet City (KLIC). Developed by Malaysian/Singaporean Internet giant Catcha Group, KLIC is expected to emerge as the key digital hub for global or local Internet-related companies looking to target Southeast Asia.

The project will be housed within Bandar Malaysia, a commercial and residential zone located on the site of a former air-force base. The site is being developed by a consortium led by the China Railway Engineering Corp.
In other developments, Bandar Utama, on the outskirts of the capital, will be the terminal for the Kuala Lumpur-Singapore high-speed rail link, scheduled to begin operation in 2026. With a journey time of just 90 minutes, the link is expected to boost business and tourism traffic.

At present, stops are planned at Putrajaya, Seramban, Alor Gajah, Muar, Batu Pahat and Iskandar Puteri in Johor Bahru. All of these locations are intended to be promoted as investment hubs in the coming years, with Iskandar Puteri enjoying a head start over the other designated sites.

Forming part of Iskandar Malaysia – the main southern development corridor in the state of Johor – Iskandar Puteri is a 2,217-square-metre SEZ. Established in 2006, it was envisaged as a world-class business, residential and entertainment hub, with its management keen to capitalise on its proximity to Singapore.

Among the businesses already operating within its precincts are Legoland Malaysia, Gleneagles Medini Hospital and Pinewood Iskandar Malaysia Studios. It is also the site of the Medini “smart city,” one of Malaysia's largest urban developments.

Within Medini, investors in six designated sectors – health and wellness, education, financial services, leisure and tourism, the creative industries and logistics – can take advantage of several tax breaks and other incentive packages. The site is expected to get a further boost in 2019 following the completion of a high-speed rail link to Singapore's Mass Rapid Transit rail system.

In addition to developing domestic SEZs, the country's Ministry of International Trade and Industry has announced that several Malaysian companies will play key roles in developing several SEZs in neighbouring Laos. These include Savan Park, a commercial and industrial hub jointly funded by the Lao government, and Malaysian consortium Savan Pacifica Development.

Among the other projects is the Dongphosy SEZ, a 70-hectare duty-free retail and residential zone intended to promote tourism, which is being jointly developed by Malaysia's UPL Lao and the Lao government. Malaysian companies are also involved in the development of an SEZ in Thakek, southern Laos.