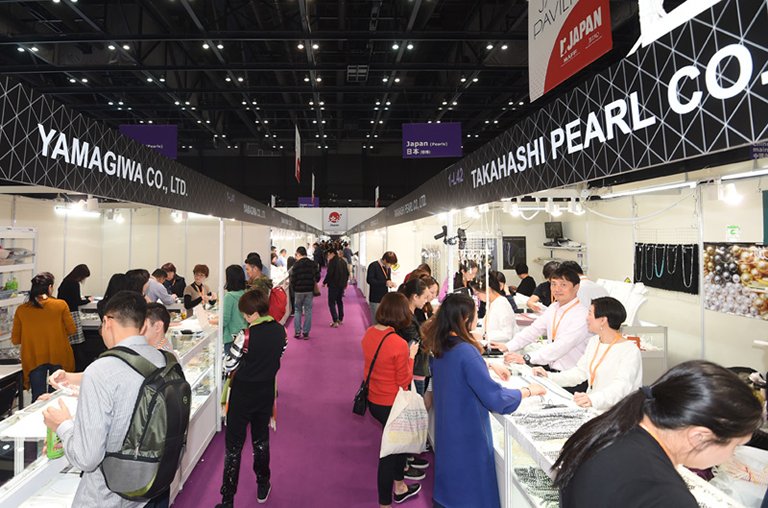 Compared with last year, international buyers have gained confidence across all major markets. They see India and the Chinese mainland as the most promising markets for 2017 while developed markets are likely to underperform. In general, respondents regard the fluctuations of the global economy as their biggest challenge this year.

The trend of jewellers selling online continues. While diamond jewellery is the most popular category online, more lower-value items such as silver jewellery, karat-gold jewellery and pearl jewellery are being sold, or expected to be sold, online compared with last year.

Jewellery traders report a positive outlook for 2017. This year, 90% of buyers and 75% of exhibitors expect their overall sales to increase or maintain the same level as last year, compared with 68% and 51%, respectively, in the 2016 survey.

In line with this positive sentiment, buyers’ sourcing plans this year indicate an expansion in general – a net 23% (29% minus 6%) of surveyed buyers are prepared for a bigger budget this year; a net 20% (24% minus 4%) expect an increase in the unit price of each piece; and a net 11% (18% minus 7%) plan to source more in terms of quantity.

As part of the survey, buyers were asked to give their views on the prospects for the market on a scale of one to five, with one indicating that the market will be “very unpromising” for the next two years, and five indicating “very promising”. This year, the emerging markets – India (3.81), Chinese mainland (3.75), and Central and Eastern Europe (excluding Russia) (3.73) are rated as the most promising. Developed markets – North America, Japan, Western Europe, and Australia and Pacific, however, are all ranked at the bottom among major markets. Yet, compared with last year, buyers have gained confidence across all major markets, with the respective ratings increased from 3.03-3.35 in the 2016 survey to 3.61-3.81 in the 2017 survey.

As to business challenges, about half of respondents (49%) report that fluctuations of the global economy is their biggest challenge in 2017, followed by the uncertainties related to prices and costs – price fluctuations of raw materials (41%) and fluctuating exchange rates (29%).

Trendy Fashion Jewellery to Offer the Biggest Potential in 2017

Respondents were asked to evaluate the potential of major market segments on a scale of one to five, with one indicating that the segment has the “least potential” and five indicating the “greatest potential”. With a rating of 3.89, respondents believe trendy fashion jewellery is going to offer the biggest potential, followed by jewellery for weddings and special occasions (3.64) and precious jewellery (3.62).

Similarly, buyers were asked to evaluate the potential regarding the retail price range of the jewellery items on a scale of one to five, with one indicating the “least potential” and five indicating the “greatest potential”. Overall, buyers indicate that the mid-market is going to offer the biggest potential – buyers gave the highest rating of 3.54 for US$101-500, followed by 3.51 for US$501-1,000.

Selling through e-tailing is a growing trend, although it appears to be less common for jewellery items than in other sectors. In the 2017 survey, 22% of respondents are reported to be e-tailers, up from 18% last year. For those who have not engaged in e-tailing business, 9% say they will offer e-tailing in the near future, the same percentage as last year.

Buyers are generally satisfied with jewellery suppliers from Hong Kong. On a scale of one to five, buyers gave ratings of 3.67 to 3.95 across seven performance indicators in the 2017 survey, well above the neutral point of 3, but slightly down from the range of 3.77-4.02 in the 2016 survey. They are more satisfied with Hong Kong jewellery suppliers’ quality (3.95), and design and technology (3.86).