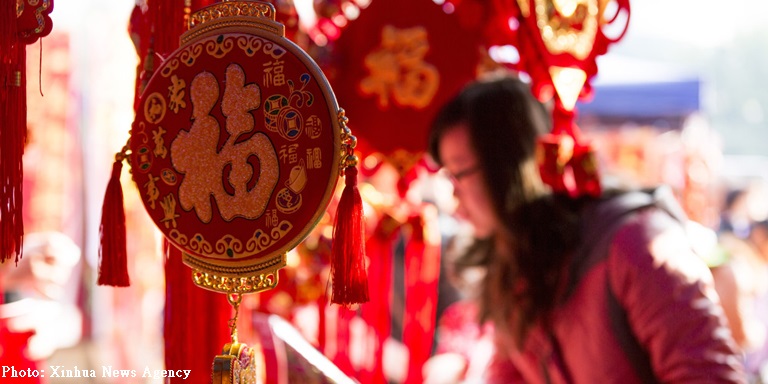 Chongqing’s primary commercial districts and key retailers racked up Spring Festival sales of some Rmb6.35 billion, up 12.9 per cent year-on-year.

Figures from China’s Ministry of Commerce showed that from New Year's Eve to the sixth day of the Chinese New Year (27 January-2 February), total takings of retail and catering enterprises across the Chinese mainland exceeded Rmb840 billion, up 11.4 per cent over the same period last year. Traditional New Year goods, eco-friendly food, seasonal clothing, gold and silver ornaments, smart energy-saving home appliances and several new digital products were among the best-selling items for 2017.

As part of a HKTDC Lunar New Year sales survey of key mainland cities, the study found that consumer spending surged across Chongqing. Many of the city’s commercial districts, shopping centres, supermarkets and malls looked to capitalise on shoppers’ positive purchase sentiments through various festive promotions, including a Spring Festival Fun Week and a New Year Shopping Festival.

With the rise in disposable income levels, consumer expectations have increasingly diversified. During the Spring Festival period, demand surged for a variety of items, including traditional Chinese New Year goods, gift items, clothing, bags, smart home-appliances and digital communication devices. Typically, these items were sought out both for personal use and as gifts.

Spending patterns also tended to vary from store to store, depending on the target demographic of each location. In the Chongqing Department Store, for instance, demand was particularly high for bedding and sportswear, with sales in the two categories recording a 10 per cent year-on-year rise. In the case of the Chongqing General Trading Group (CGTG), while televisions, refrigerators and washing machines remained bestsellers, sales of small home-appliances, including water and air purifiers, also surged by 15 per cent year-on-year.

For Suning, a concerted campaign of online and offline promotions saw a number of domestically manufactured items – including the latest products from Huawei, Vivo and OPPO – enjoy a 20 per cent year-on-year increase in demand. In the more low-tech sector, several local supermarkets, including Yonghui, reported brisk sales of fresh food, vegetables and fruit, while there was a 12 per cent rise in the sale of traditional Chinese New Year goods gift packs.

Frequently, tradition and purchase decisions were linked in line with a number of Spring Festival-themed promotions. At the Landmark Riverside Park, a cultural tourism complex that opened last September, for instance, customers could redeem acquired bonus points for a chance to hang paper wish-slips under the centre’s lanterns. Meanwhile, at the Aegean Shopping Mall, customers could win red packets containing cash through a series of lucky draws, while the MIXC shopping complex staged cultural heritage events.

Overall, spending on consumer services grew in line with outlay on cultural and entertainment experiences. While visiting heritage sites, attending lantern fairs and enjoying hot springs have long been a Spring Festival tradition for many Chongqing residents, such cultural emblems have now been successfully co-opted by several commercial organisations as part of their New Year promotions.

Overall, despite an increased number of consumer options – in terms of retail sites and entertainment service providers – Spring Festival spending levels appear to have risen sufficiently to ensure the profitability of new operators.

The following is a summary of the Spring Festival sales figures of three leading Chongqing outlets, together with an overview of their success in developing online channels: