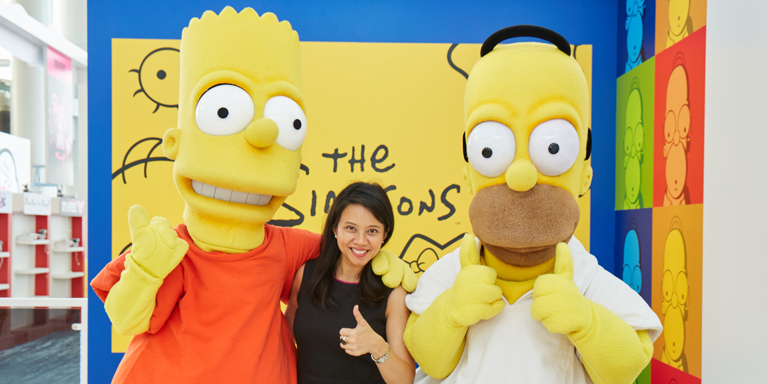 One of Twentieth Century Fox’s biggest commercial licensing brand, The Simpsons is the longest-running scripted show in television history. After exploding into a cultural phenomenon in 1990, the multi award-winning show has remained one of the most ground-breaking and innovative entertainment franchises, recognisable throughout the world.

What’s the secret to the success of The Simpsons?

I think it’s the way we transform The Simpsons show into realistic life experiences. We identify good partners for each market within Asia-Pacific, and ensure that the design and production of Simpsons-branded consumer products fits its DNA, so that our customers will be thrilled to purchase. Therefore, each of these collaborations becomes a hot topic in the market, which brings in extra value for The Simpsons brand.

How important is the Asia-Pacific region to Fox’s global business?

We don’t disclose the percentage of revenue it accounts for, however I can confirm that APAC is one of our fastest-growing regions. Following the May 2016 opening of our first flagship The Simpsons store in Beijing Sanlitun, our target is to open more than 40 stores in the China market by end of this year. Coming soon, the inaugural Fox World theme park will open in Genting, Malaysia, featuring 25 attractions based on the movies Ice Age, Rio, Alien vs Predator, Planet of the Apes, Night at the Museum and more.

We are also targeting local franchises for other brands under our Twentieth Century Fox Consumer Products division, including the award-winning animated series Bob’s Burgers, the unique comedy Son of Zorn, and 24: Legacy. The enduringly popular Family Guy features highly on the bill alongside The Simpsons, a powerful franchise that continues to evolve.

What about your Hong Kong business?

We have some strong partnerships in Hong Kong, including for The Simpsons brand, which is perfectly positioned to capitalise on the trend for gender-neutral properties and demand among teen girls and young women for design-led products across all categories. Local fashion shops D-mop and I.T. do a lot of our IP in apparel. Cosmetics store Sasa represents our brand Only Mua, and also sells Marilyn Monroe lipsticks, another of our IP brands.

The Aliens movie will launch in the United States this year, and I expect that will spin off a lot of franchise collaborations. Deals are being negotiated, and I had many discussions with potential partners at the Hong Kong International Licensing Show.

Why is sound, reliable licensing of brands in the Fox portfolio so pivotal to your company's continued success?

As one of the world's leading entertainment companies, Twentieth Century Fox reaches more than two billion people globally through its content and distribution channels daily. The company has the top-two grossing films of all time in Avatar and Titanic. Our animated properties include Ice Age, the number-one international animated film franchise, and The Simpsons, the longest running television series of all time. Fox has one of the largest libraries in the world with hundreds of films and televisions shows available for merchandise licensing, retail programmes, promotions, clips and stills licensing.

The popularity of these shows and films drives high demand for their licensed consumer products. We need to ensure the products meet customers’ expectations, sell at a reasonable price, and most importantly, that the IP of the brand is protected.

What can you gain from attending the Hong Kong International Licensing Show?

The Hong Kong International Licensing Show is one of the most influential licensing shows in the world. At the hub of an important region for our company, the event gives exposure to our brands, and as mentioned earlier, facilitates potential partnership opportunities.

This time, I also represented Twentieth Century Fox Consumer Products in a panel session at the Asia Licensing Conference. It was inspiring to share market case studies of The Simpsons with such a high-level audience.