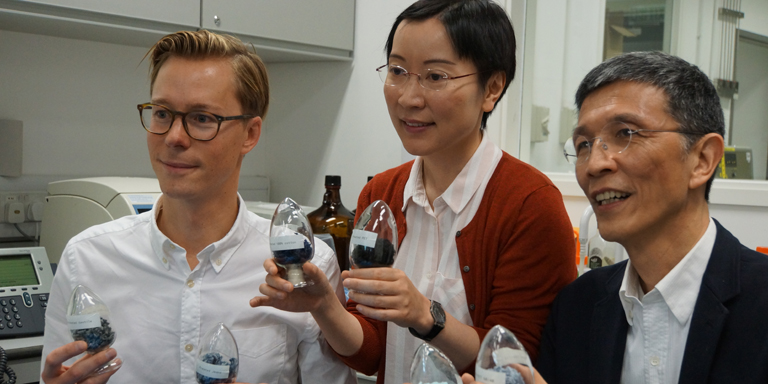 Unwanted textiles pose global environmental problems. While major brands such as H&M are tackling the issue with in-store donation boxes and vouchers for used-item donors, many unwanted garments still end up in landfills, or are downcycled into insulation, carpeting or other low-value applications.

According to Mr Keh, the initiative is the H&M Foundation’s first and only project of its kind and says he’s delighted that Hong Kong was chosen to develop this game-changing technology. “They had a choice of going to any global research and development centre with this idea, and they came to us because they not only wanted a high-quality scientific solution but also something that could be put into the market place as quickly as possible,” says Mr Keh. “The H&M Foundation sees Hong Kong as the hub for many activities related to manufacturing, textile and apparel,” he says, adding that it has previously worked with the Foundation on other sustainability projects, including material impact assessment and waterless dyeing.

HKRITA was selected by the H&M Foundation due to its strong focus on applied research and mission to make research useful, scalable and commercially viable, says the Foundation’s Project Manager Erik Bang. “The Institute’s track record and collaborative approach in working jointly with other institutions locally and internationally made the case even stronger,” says Mr Bang.

“They [The H&M Foundation] had a choice of going to any global research and development centre with this idea, and they came to us because they not only wanted a high-quality scientific solution but also something that could be put into the market place as quickly as possible.”

The H&M Foundation aims to maximise impact on the industry by solving the challenge of recycling textile blends, Mr Bang explains. “Textile blends make up a very large, and growing, share of textiles produced globally, but there is no technology available to separate the fibres to properly recycle them. Instead it is today only possible to downcycle, which means the industry has to produce more virgin materials to fill the demand. Since the textile industry is one of the most planet-intensive industries and our planet is negatively affected by the current linear approach of take-make-waste, it is imperative we transform the industry to become circular and decouple growth from the use of natural resources.”

The move by the Hong Kong Government to co-fund the project sends a strong message about the importance of addressing textile waste and provides substantial resources to properly scale technologies from the lab to commercial trials, says Mr Bang.

Among the textile recycling techniques the institute is exploring is a biological process similar to beer fermentation. The idea came from another series of projects HKRITA worked on with Hong Kong’s City University, where it turned starchy food waste, such as cakes and breads from major fast-food chains like Starbucks and Café de Coral, and converted them into polylactic acid fibres. The resulting products were showcased in a smart fashion ready-to-wear exhibition at PMQ, a creative cluster in Central district, called “Material Translation” created by 11 local designers. “After that method was successful, it made us wonder if we could go from fibre to fibre,” says Mr Keh.

There are many advantages to this type of recycling, according to Mr Keh. “We’re using enzymes to break things down, so it’s not a mechanical process, or energy-intensive. And we try to retain the original characteristics of the fibre as much as possible. We think we can separate at least two out of three [of the materials] and turn the cellulosic fibres into sugars and starches and polymise into fabric again, or use as an energy source.”

The other series of projects is chemical, and researchers are investigating using ionic fluids as well as a hydrothermal approach to separate materials. Having recently worked with H&M on developing dyeing technology that uses less water, HKRITA, with its recent biological research on turning food waste into fibre, is ahead of the curve, says Mr Keh.

He adds that no other institution globally is currently conducting similar research, particularly on the biology side. “On the chemistry side, some people have had success using ionic fluids to break down materials. But the results so far are not that satisfactory, as it’s a slow and expensive process.”

Its goal over the next three to four years is to find a cost-effective solution – be that biological or chemical – that can be rolled out on an industrial scale and potentially create a new industry that can process the materials.

Mr Keh says that the H&M Foundation has taken a level-headed approach to the study. “They know it’s never been done before, and realise a lot of things that can be done in the lab can’t be industrialised. But it’s great to have a partner willing to take risks with us. We’re very excited because this is a global and local problem and would help solve Hong Kong’s landfill issue. We’ve made it very clear that we’ll license this to anybody who comes along, including all of H&M’s competitors.”

Hong Kong will be the first community to benefit from the research as the license rests in the city, noted Mr Keh. “We want to create a simple, elegant solution that can be used for a broad range of materials that is affordable, and we think this aligns very well with our mission to be useful.”