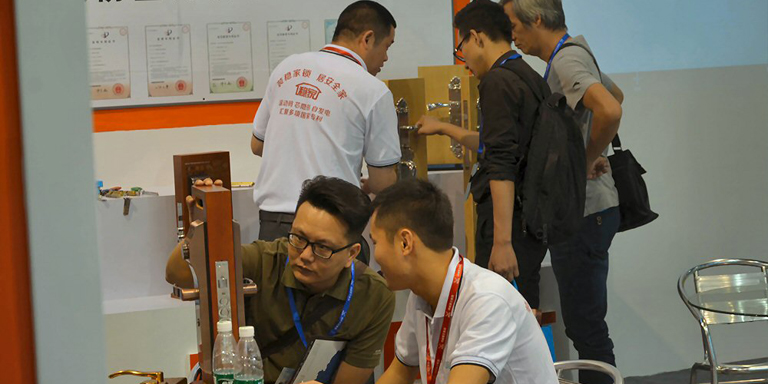 Ease of access and safety were key issues at a security lock trade show in Guangzhou.

The competing priorities of security and convenience were top concerns for exhibitors and visitors at the concurrent China Lock Industry and Guangzhou International Biometric Identification Technology expos held in May. For many, the answer appeared to lie in smart systems that offer ease of access and a high level of protection. The question remained, however, as to whether consumers would be willing to pay the premium prices such systems command.

Overall, a considerable range of technologies was on show at this year's event. While a number of manufacturers favoured fingerprint-based systems, others opted for voice-activated password control access. There was even a sizable contingent offering a combination of different types of access control for extra security.

Safety was another issue, with many exhibitors keen to emphasise the robust nature of their back-up systems – fail-safes that ensure access in the event of electric power cuts.

Taking a lead on the security front was Jiangsu's Taizhou Mahe Machinery Manufacturing. The company was keen to showcase its Wenjia range of locks, which feature an “invisible” lock cylinder, as well as an electronic plus mechanical anti-theft dual lock.

“When the key is removed, the lock cylinder recedes into the interior of the door, becoming almost invisible,” said Bao Jianguo, a Senior Manager with the company. "This conceals the path to the opening mechanism."

Superficially, at least, the Wenjia system looks similar to conventional locks. However, it consists of both a mechanical key and a remote control. The user first deactivates the electronic protection with the remote, then inserts the key into the keyhole when exposed. Once the key is removed, the keyhole retracts out of sight.

According to Mr Bao, the company's short-range rolling code technology uses a high-security password combination. The electronic lock protection facilities can only be activated via a remote control, which must be no more than 50 centimetres away from the lock. The short distance reduces the chance of data interception transmitted by the remote control.

Zhang Dejian, the company's Marketing Director, said that the system uses a 360-degree anti-tamper, anti-drill air rotating cylinder. Proving the secure nature of the system, several experienced locksmiths were tasked with cracking the lock throughout the course of the show, with even the fastest taking 270 minutes.

"We specialise in fingerprint locks, with our system able to store more than 3,000 user fingerprints.” said Mr Zhang. “The lock also comes with built-in voice cues, with users able to customise the prompt to their individual requirements."

The lock can be opened via several multiple-layer authentication modes, including a requirement for two sets of fingerprints or for fingerprints plus a password. The password function also uses “anti-peep technology” which allows users to input a chain of random words of which only one is the actual password.

Mr Zhang expressed confidence in the future of the fingerprint biometric lock industry, saying that his company had sold more such systems in May than in the whole of 2015. Echoing those sentiments was Zhou Yi, President of Shenzhen Coson Electronic Technology, which is focused on developing the core control modules used in intelligent locks.

According to Mr Zhou, an intelligent lock can be incorporated into a large smart home system through a gateway module. Coson's smart lock module can be unlocked by keys, a smartphone, Bluetooth or passwords. By installing a mobile phone app developed by the company, visitors can unlock the door with the owner's authorisation or obtain a dynamic password from the owner for a one-time unlocking. The owner can also view the status and the number of times the door has been opened and closed via the app.

Electronic locks require a power supply and most cannot be opened in the event of a circuit failure or an exhausted battery. With this a clear concern to users, several exhibitors had their own bespoke solutions to tackle the problem.

In the case of Taizhou Mahe Machinery Manufacturing's Wenjia lock, apart from batteries, the system is also equipped with a self-generating power device. Turning the circular button on the upper side of the door lock will automatically generate power. Locks that offer both battery operation and a self-generated power system provide extra backup and peace of mind. In the event of an emergency, users only need to press the handle from the inside to open the door.

In the case of the fingerprint lock showcased by Dongguan Visisv Science Tech, the use of a key is made almost entirely obsolete. Mr Zhang said that the system is highly convenient and users no longer need to carry keys around, or worry about losing or forgetting keys.

The company's system can function for 18 months on four batteries or for up to four years if the eight-battery option is adopted. In the event of a power outage, the lock can either be opened by a key or an additional battery can be temporarily installed externally to restore fingerprint access.

Other exhibitors at this year's show included Guangzhou-based Microzero, which launched a fingerprint identification algorithm system, complete with a 360-degree rotation identification function. Jiangxi Tiger Safe Equipment Group featured a range of high-quality steel units, formed from a single piece of metal, with no hard corners – an innovation said to ensure added strength. Zhongshan-based Ribao, meanwhile, displayed a range of safes with an automatic double-lock design. Secondary mechanical locks can be triggered automatically in the event of any unauthorised attempt to access their content.