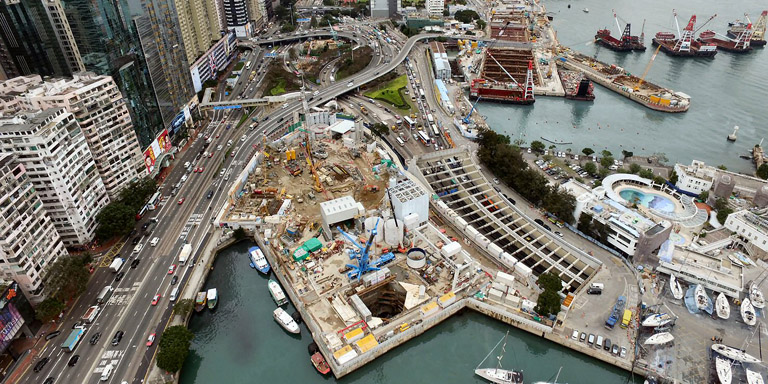 Dragages Hong Kong’s long and storied history as a full-service provider has made the French construction and engineering company a truly local firm.

The French company has taken part at significant turning points in the city’s infrastructure development. From the major refurbishments to the city’s first international airport, the storied Kai Tak Airport, starting in 1955, through to the opening of the Kai Tak Cruise Terminal at the same location in 2013, the company has taken on world-class construction jobs in Hong Kong. After 60 years, the company and its relationship with Hong Kong, and now, the Asia-Pacific region, is as strong as ever, says Dragages Managing Director Nicolas Borit.

“I think one of the lessons learned here and what makes us a very active player in the local construction industry is very much related to the fact we have not left Hong Kong for the past 60 years,” says Mr Borit. “We have been able to create very much a local company.”

The transition from big-name overseas player to local mainstay to regional powerhouse comes from its decision to embrace Hong Kong entirely, says the French executive, who has called Hong Kong home for more than a decade.

At the heart of the company’s Eastern pivot is a work force of nearly 3,000 staff, 90 per cent of whom are local. “A full expatriate company has simply no chance to succeed in Hong Kong,” he says. “You need a very strong local base with local professionals to be able to succeed in this environment.”

A full-service provider across building, civil, electrical installation and maintenance, Dragages offers innovative design options, finance and operating solutions. Dragages was actually founded in Vietnam in 1902, before winning its first Hong Kong contract at the Kai Tak Airport – to dredge and reclaim enough land to extend the famed runway.

Dragages evolved in tune with Hong Kong in the ensuing years. In 1986, the company became part of global business Bouygues Construction.

It undertook the redevelopment of the iconic Hong Kong Stadium, which Dragages worked on from 1992 to 1994, and phase one of the Central reclamation project between 1993 and 1997. Phases two and three of the Kwun Tong Bypass from 1989 to 1991 saw Dragages transform bridge-building by using a 120-metre launching girder, a first that saw two segments of the bridge lifted into position at the same time, allowing for the completion of the project 12 months ahead of schedule.

In 2011, the company drew global acclaim for its work on the Hong Kong West Drainage Tunnel, receiving the International Tunnelling Award. That heritage runs strong today, with tunnelling work on the Shatin to Central Line for the MTR Corporation, and a series of tunnels for the high-speed rail project that will connect Hong Kong’s West Kowloon to the Chinese mainland.

The company also has a major role in the construction of the Hong Kong-Zhuhai-Macau Bridge, building the 9.4-kilometre, dual three-lane carriageway that will become the Hong Kong Link Road. In step with Dragages’ reputation for innovation, the link road boasts a 180-metre-wide, pre-cast segmental viaduct – the world’s biggest – and is the first bridge in Hong Kong designed with a pre-stressed, pre-cast pier structure.

“[Hong Kong] makes an ideal playground for a construction company to bring innovation, because there is always a new challenge that you would not necessarily find anywhere else in the world.”

“There are not that many places in the world where you find such diverse conditions and environments,” Mr Borit says. “Therefore this makes an ideal playground for a construction company to bring innovation, because there is always a new challenge that you would not necessarily find anywhere else in the world. We’d rather focus on complex engineering projects. This has been what Hong Kong has proposed to us over the years.”

“Hong Kong, in my view, is a good place for doing business because, all those years, I can safely say we have always been treated fairly for the works we have delivered in the city,” says Mr Borit.

Dragages’ attention to detail and its ability to produce the goods without fail have also helped cement the company’s reputation. “When I said we’ve always been treated fairly, it’s also, I believe, due to one thing that is very important in Hong Kong, which is that you have to deliver, whatever happens,” he says.

The transition to a local company has not happened overnight, but Dragages’ willingness to stay put in Hong Kong through good times and bad has set an example for companies looking to follow suit.

“We are exceptionally lucky to be in Hong Kong, because Hong Kong is a very healthy place, with a government that has the financial capacity to support not only the construction industry, but economic development as a whole.”